The fields you can see here, which are now farmed by a local organic food producer, were once part of Imperial College. That might sound strange, as Imperial College is based over 60 miles away in London, but from the late nineteenth century, Wye was the university’s school of agriculture. Nestled on the foot slopes of the Kent Downs above the fertile Stour valley, the varied soils here made a perfect outdoor classroom for a wide range of agricultural and horticultural studies.

On our route from the village, you might have spotted a few scattered barns and farm buildings. These are now occupied by local businesses, as the agricultural college closed in 2009. However, this is still an important area for farming. The soils in Kent, ‘the Garden of England’, are so rich because of sands and clay particles left here by rushing rivers created when ice sheets melted at the end of the last Ice Age. Mixed with the chalk from the downs, it created a high quality, free draining soil idea for growing fruit, vegetables and hops. 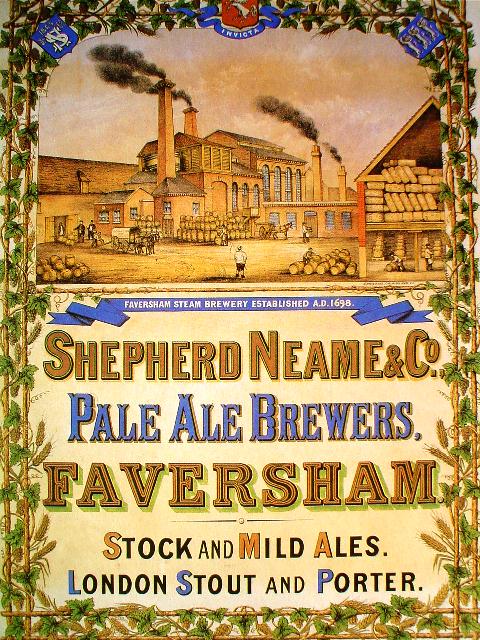 Among Wye College's major contributions were the development of many new hop varieties including Wye Challenger, Wye Northdown, Wye Target and Wye Yeoman. Local hops are still a key ingredient in brewing beer and with a recent upsurge in microbreweries using locally sourced ingredients, may hopefully become a feature of the environment once again.

Continue on the track over a minor road to a gate and a chalk path climbing the steep wooded slope. When it emerges onto a narrow lane, turn right and after about 300m follow the footpath sign up on the right and walk ahead to the edge of the downs. Turn left along the top of the escarpment and stop by the commemorative stone above the Wye Crown.

Look down and you’ll see we’re standing above bundles of white rock. More spectacular from a distance than from directly above, these white rocks make the shape of the Wye Crown. While it’s not perhaps a traditional chalk figure - like the Uffington White Horse or the Long Man of Wilmington - it represents an interesting way of using the landscape to tell a story.

The origins of the Wye Crown go back over a hundred years to the early days of the twentieth century when there was still an agricultural college here.  Keen to celebrate the coronation of King Edward VII in 1902, the college’s principal came up with the brilliant idea of carving a crown into the hillside.

This was far easier to say than do; laying out a symmetrical design on an irregular surface was a tricky challenge. The surveyor came up with a solution. He plotted the crown’s outline from a vantage point in the fields below, using a team of students armed with flags.  The students were signalled into position until exactly the right shape was achieved then barrow loads of turf and soil could be dug out of the hill. 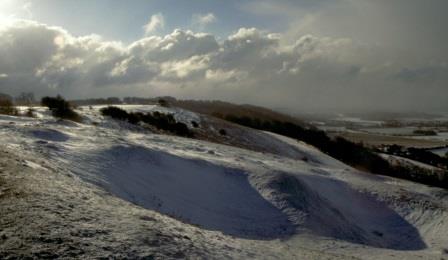 While you’re here, look around the area above the crown. You’ll see a number of deep pits and hollows. These date back to the Iron Age (800BC - 43AD) when our ancestors mined these hills for their valuable iron ore to make tools and weapons.

Continue along the top of the escarpment among the dips and hollows until you reach a field gate near the junction of a very narrow land (the Wye-Hastingleigh road). Bear right on the lane and cross the road to enter the Wye Downs National Nature Reserve. Emerging from the woods, bear left and stop above the deep valley known as the Devil’s Kneading Trough.

This spectacular valley is known as the Devil’s Kneading Trough. Often described as Kent’s top beauty spot, from this dramatic viewpoint you can see over the lowland of the Kentish Weald to Romney Marsh and as far as the English Channel.

Most of Kent, is reasonably flat, so how did these high ‘downs’ get here and was it really the devil who carved out this spectacular valley?

For the answer, we’ll need to travel back in time. During an era known as the Cretaceous (around 14590 to 665 million years ago), much of Britain was covered in warm, shallow seas. Over millions of years, the remains of tiny sea creatures slowly built up on the sea floor. Their skeletons and shells compressed under the weight of water and of each other, formed chalk.

Fast forward to just 60 million years ago, and in the same phase of mountain building that created The Alps, massive, thick layers of chalk rock were were pushed up into a huge dome that covered most of south-east England. Over time, the roof of the dome became very weak where it was cracked and eroded away by the work of wind, weather and rivers, like a boiled egg that has had its top removed! Today the North and South Downs are all that remains of the chalk layer that once covered the whole area.

But was it really the devil who carved out this deep valley?

For the true answer, we need to think about what’s under our feet…Chalk is a porous rock, meaning that water can pass through it.  Some twenty times in the past 2.5 million years of the Ice Age, thick ice sheets and glaciers covered much of northern Britain. Further south in places like Kent, the Ice Age created tundra like conditions, much like those in Alaska today, and froze the chalk to depths of 30 metres and more (that’s six times the depth of a swimming pool!) 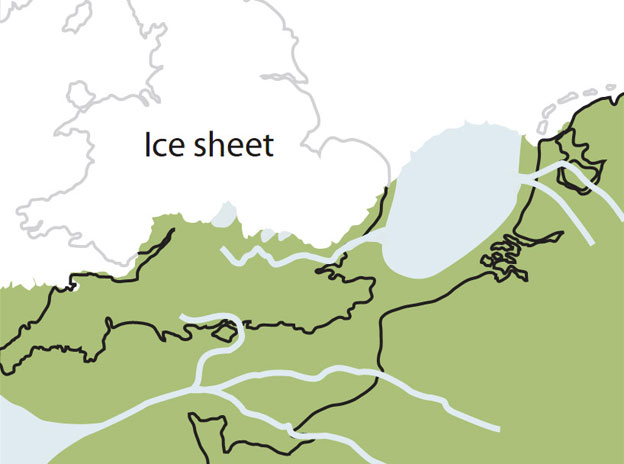 When chalk freezes in this way it becomes impermeable (water cannot pass through it). So, whenever the weather warmed, such as in brief Ice Age summers or at the start of longer warmer phases, the top layers of ice in the soil and rock thawed. Gravity did the rest – the sludgy mass of water, rock and soil particles flowed across the frozen ground beneath, carving out steep valleys in the soft chalk.

Stay on the path up above the valley until you reach a footpath sign on the right at the edge of woodland (Newgate Scrubs) that points downhill along a deep, hollow lane. Follow this sunken track downhill to emerge at a road. Turn right onto the road and stop at the first house on the right with a stream in the garden.

Just before you reach the road junction, see if you can spot the detached house on the right. Can you see a stream running through the garden? If you look at an Ordnance Survey map, you’ll see that there is a spring marked here and another just a little further south at Fishponds Farm.

Though it’s not always visible, water is a key feature of the downland landscape, and its appearance or otherwise gives us more clues to what’s under our feet…

Up above the Devil’s Kneading Trough we found out that the underlying chalk rock of the North Downs is permeable, meaning water soaks through it. So any rainwater that falls on the Downs drains into the ground. Water slowly passes down through the chalk until it reaches a layer of impermeable rock at the bottom of the hill.  At the bottom of the hill, the impermeable rock is close to the surface, and as the water cannot drain any further, it emerges as a series of natural springs.

The spring which emerges in this garden is more than just a pretty feature; it gives the nearby village of Brook its name. The spring flows above ground through the village before it joins the River Stour. The village of Wye grew on the banks of the Stour at a crossing point or ford and this area is still an important hub of the village today.

This short walk has revealed a few of the features of Kent’s classic downland landscape: chalk, water, agriculture, small settlements and grand views. There’s plenty more to explore on the website and over the next few month’s we’ll be working with the Kent Downs AONB to showcase more of the area’s unique places and stories.

Carry on ahead, along Amage Road. After about 60m cross a stile on the left and walk across a field to its far corner. The footpath back to Wye continues along the boundary of several fields, crossing the drive of Silks Farm and passing Withersdane Hall. When the lane curves sharply left, continue ahead on a narrow path alongside a tall beech hedge. When you reach a crossing road, bear left towards Wye village, the church and back to the start of the walk.

View across farmland from up on the downs © whereareyousimon, Flickr CC

A circular walk from historic Wye in the Kent Downs AONB

Rising up steeply from the flatland of the Kentish Weald, the North Downs offer a dramatic landscape in a relatively flat county. Novelist H.E. Bates, who set The Darling Buds of May in his native Kent, described the Downs as “an unfailing compass-point with a magnetism that draws you towards them”.

This walk takes you from the picturesque village of Wye in the valley of the River Stour, up onto the ridge of the North Downs. Enjoy huge, sweeping views across the county and discover some of the features in the landscape that make this such a captivating place.

“If you would know me, you must know the Downs, the chalk hills of Kent, stretching across the county, shaking themselves free from roads and smoke and towns…”
- Rhoda Cutbush, The North Downs

The devil in the detail

Where has all the water gone from Devil's Dyke?

A journey of discovery up and down the Chiltern Hills