Why do the Long Man and so many other hill figures live in southern England? 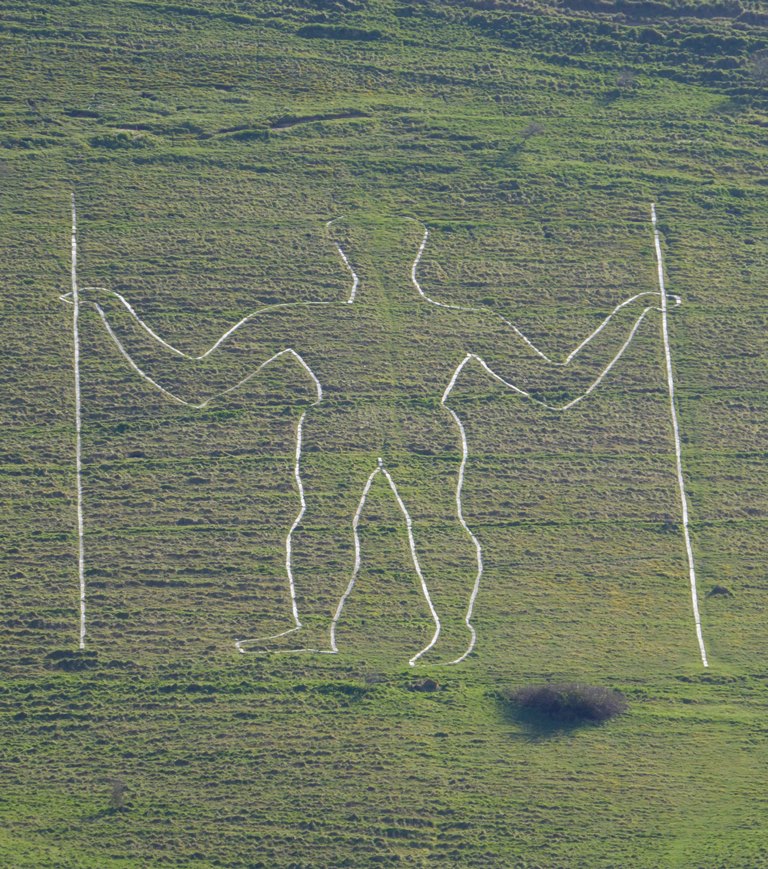 To begin look at the Long Man’s shape. His name comes from his stretched body which appears in proportion when seen from below. Now take in the landscape around him, a grassy slope with very few trees.

This slope, Windover Hill, is typical chalk downland. The Long Man’s home is part of the South Downs - a chalk ridge that rolls gently through Hampshire and Sussex. Though they look tranquil today the Downs have dramatic origins.

The chalk formed around 130 million years ago when the land here was under a warm tropical sea. Chalk is made from the compressed skeletons of ancient sea creatures, which give the rock its white colour. Around 25 million years ago the chalk was transformed.

Massive movements inside the Earth lifted and folded huge areas of land into wave-like peaked shapes. This process formed the mountains of the Alps. In Britain one result was the creation of the North and South Downs, two chalk ridges with a steep cliff on one side and a gentle slope (‘down’) on the other.

Windover Hill’s chalk slope helps to make the Long Man visible. So do the land’s other natural properties. Chalk is soft and porous, which means water easily drains through it. This produces soil that is too thin and dry for large trees. But it can be cut back with basic hand tools to reveal the rock underneath.

As a result hill figures have appeared throughout the chalky regions of southern England since at least the Bronze Age (between 1200 and 700 BC). The Long Man’s age and mysterious origins are keenly debated but one thing is certain – like all Britain's hill figures, he is a product of his environment.

From his location and white outline, you would guess the Long Man is made of chalk. Instead the figure we can see today is a series of painted concrete blocks. But why?

Chalk figures need constant maintenance or they soon vanish. Grass and vegetation quickly grow back and keeping figures visible takes a lot of time and physical effort. Around 35 have been lost to nature.

Also look carefully at the grass around the Long Man; can you see slight horizontal ripples? These are ‘terracettes’ made by soil moving downhill, a bit like raindrops running down a window pane. This ‘soil creep’ occurs naturally through gravity and weathering. The process speeds up though when soil is disturbed, such as by grazing sheep or burrowing earthworms.

So in 1969 the Long Man was preserved in concrete to prevent soil covering his bones and worms eating his flesh.

The Long Man has puzzled people for hundreds of years. Is he an ancient fertility symbol? A pagan god? A celestial calendar? The image of a man holding staves appears on Roman coins, so some suggest he is a Roman warrior. Or is he a medieval pilgrim, made by the monks at nearby Wilmington Priory?

The oldest record of him is a 1710 drawing of a ‘Green Man’ visible as a shadow in the grass. In 1874 his outline was re-laid in yellow bricks and during the Second World War he was painted green to prevent enemy pilots using him for navigation. Various accounts suggest he once had a face, a helmet, and that his feet have moved.

In 2003 archaeologists estimated his age to the mid-16th century. Soil analysis revealed that Windover Hill had barely changed until a layer of chalk rubble rolled down the slope around 500 years ago – possibly from the newly-cut figure. So though we don’t know who the Long Man is, his surroundings provide suggestions.

Keeping watch over the South Downs, the Long Man of Wilmington is one of Britain’s most mysterious residents. Standing proud with a stave (stick) in each hand, he is supported by grassy hills and shrouded in myths and folklore.

The Long Man is one of over 50 hill figures in Britain. While many depict white horses, the Long Man is the largest ‘human’. At 226 feet tall he is some 46 feet taller than the Cerne Abbas Giant in Dorset.

Britain's hill figures vary in size and shape but most of them appear in England's southern counties - especially Dorset, Wiltshire, Hampshire and Sussex.

Why do the Long Man and so many other hill figures live in southern England? Click to reveal the answer

Caroline Millar and Jo Kemp for advice on the text

The Long Man is cleaned annually by local volunteers, including a side of Morris dancers who dance at the figure’s feet each May Day