Today this parking area is mainly used as the starting point for walks along the coast to Birling Gap or inland to the pretty downland village of Alfriston. But during the First World War (1914-1918), this was the site of a sprawling barracks and training ground, where soldiers were gathered before being sent off to serve in the war.

There were actually two camps at Seaford. North Camp is now buried beneath the shops and houses of the modern town. The remains of South Camp though are still faintly visible. Despite the ground being ploughed over for farming, you can still make out humps and bumps in the earth which were once trenches.

This area of East Sussex was chosen for a barracks as the hilly contours of the land provided diverse terrain suitable for training the soldiers. The important wartime harbour of Newhaven was also close by, from where soldiers and ammunition were shipped to the Continent.

Before we begin our walk through this special landscape, take a moment to think about the lives of the men who were barracked here. What might they have thought and felt as they prepared for an uncertain future?

From the car park, take the central track past the gate. Go down the hill, choosing the middle track. Turn right at the cattle grid and go on the path downhill towards the sea. Stop at the bottom when you reach the sign for Hope Gap.

This is the perfect spot to enjoy what’s often voted one of Britain’s best views: the Seven Sisters cliffs. You can find out some of the stories behind the view here.

Natural physical forces created the Seven Sisters and the hills of the South Downs behind them. This landscape is also shaped though by the popular imagination. Like Dover’s White Cliffs, the Seven Sisters have come to stand in for an idea of Englishness - strength, fortitude, durability and resilience. 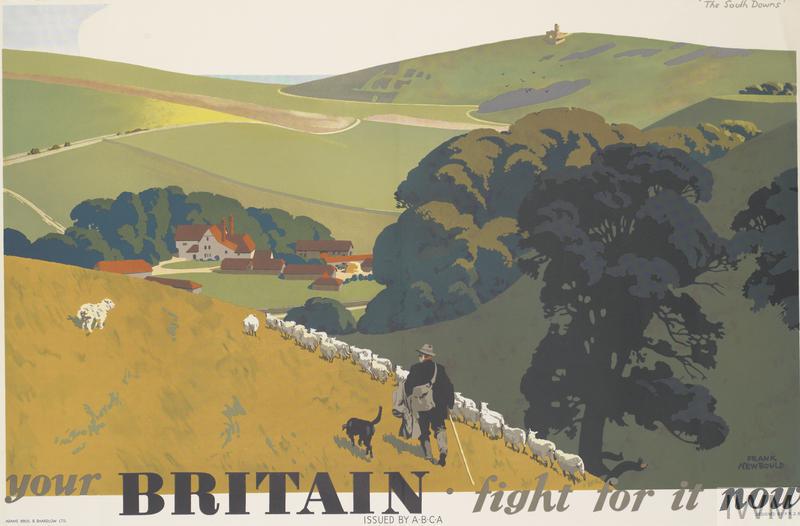 It is no accident that during the Second World War (1939-1945), a view of nearby Birling Gap and the pretty inland village of Alfriston on the Cuckmere River were used in propaganda posters.  Featuring the rousing slogan ‘Your Britain, fight for it now’, these posters appealed to a particular type of patriotism. The images of the South Downs around Cuckmere Haven symbolised the Britain that soldiers were fighting to protect.

But it’s worth remembering that many of the men who enlisted and fought in the British Army, were not Britons at all. Many came to fight from Canada, Australia and New Zealand, the West Indies, South Africa and India.

If you want to explore the beach at low tide, take the steps down to the shore. When you’ve finished exploring, climb back to this point then turn left and head over the hill to stop by the row of white coastguard cottages on the right.

This area is known as Cuckmere Haven. After flowing for 20 miles from its source at Heathfield in the Weald, this is where the Cuckmere meets the sea.

Unlike the other Sussex rivers which enter the English Channel – the Arun, Adur, Ouse and Rother – the mouth of the Cuckmere has not been developed. For example, neighbouring Newhaven to the west and Eastbourne to the east both have working harbours. In fact, Cuckmere Haven is the only river estuary in the South East of England that hasn’t been commercially exploited.

Today, the Haven is part of a 700-acre nature reserve. Sheep and cows graze the water meadows; wading birds stalk the mudflats, while flowers including orchids and marsh samphire flourish along the riverbanks. Look more closely though and we’ll see that that Cuckmere Haven is a man-made landscape.

The name ‘Cuckmere’ probably comes from a Saxon word for ‘fast flowing’.  Here at the river’s estuary, however, the Cuckmere meanders slowly in wide, curving loops across the flat floodplain. 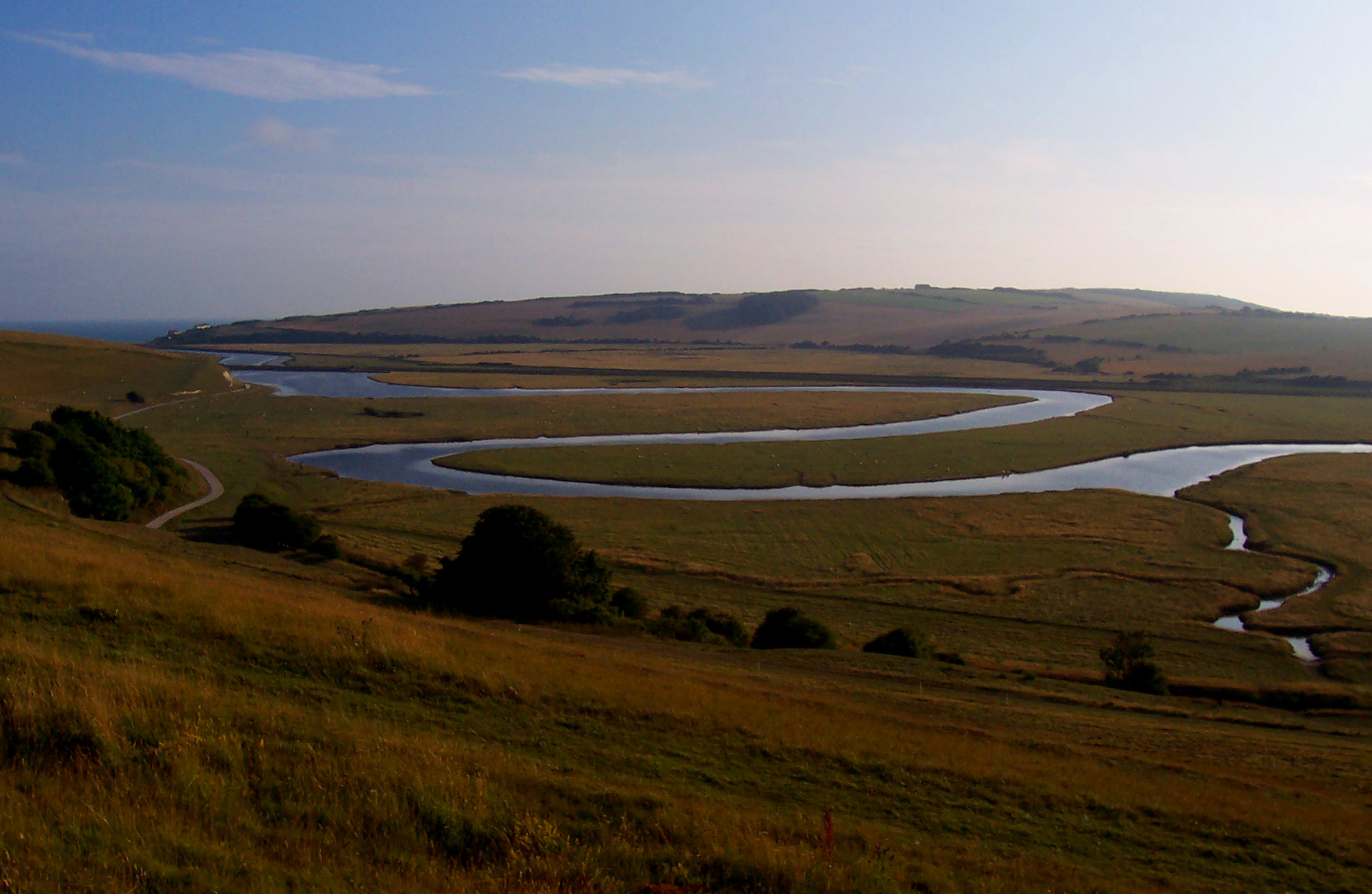 While these meanders formed naturally, the old river Cuckmere no longer flows into the sea, making the river’s much photographed loops a pretty, but static feature of the landscape. The ‘river’ that enters the sea here is a man-made canal cutting alongside the old Cuckmere. It was dug in the nineteenth century to speed up the river’s flow and reduce the risk of flooding upriver in Alfriston.

If you have time, explore the shingle beach. Look around and you’ll find evidence of the area’s twentieth-century history.  The Haven’s topography – a wide low-lying floodplain flanked either side by high cliffs – meant it was identified during the Second World War as a possible enemy landing site. 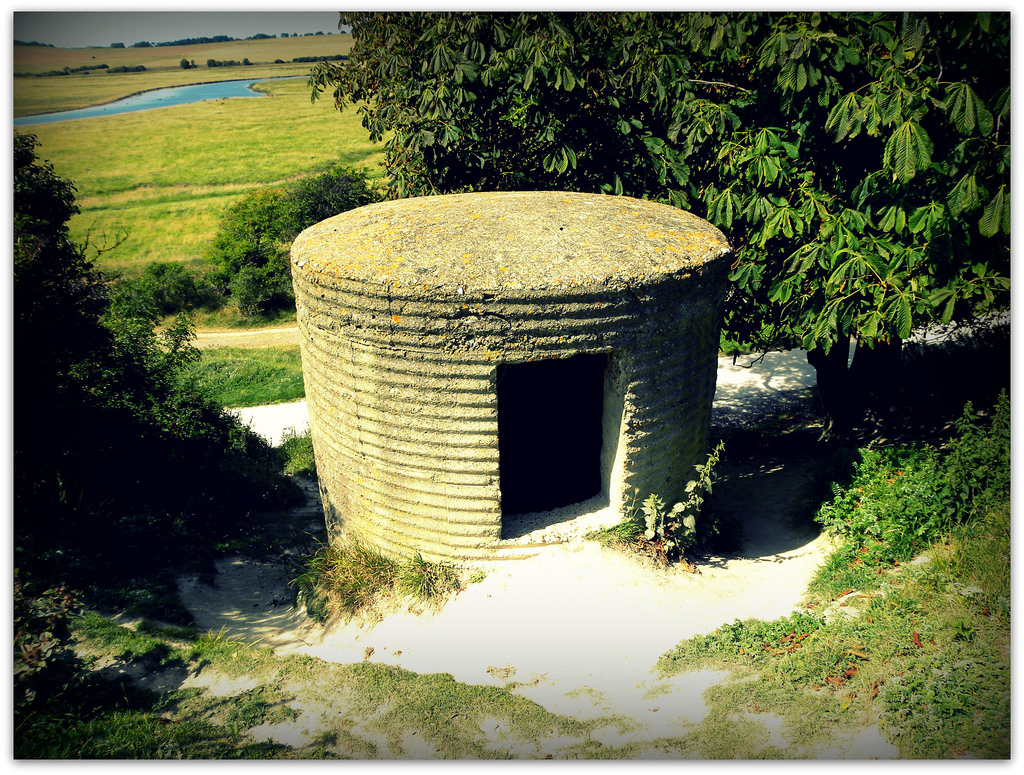 Defences were built here to deter a potential German attack. We can see the remains in concrete pillboxes, ditches and anti-tank obstacles. A lighting decoy was also set up to replicate the lights of Newhaven harbour. The aim was to confuse the Luftwaffe into dropping their bombs here rather than at the real port just a few miles to the west.

Pass the cottages and walk down to the beach. Walk along the shingle bank and take the path on the left side of the river. Follow the river upstream till you reach Exceat Bridge by The Cuckmere Inn.

From here, next to the Cuckmere Inn, you can choose to cross Exceat Bridge and enter the Seven Sisters Country Park. It’s worth the short walk to look round the visitor centre and café, and to connect with more walks in Friston Woods. You’ll need to return to this spot though to continue this walk.

The bridge is named after the lost village of Exceat. First mentioned in the Domesday Book in 1086, it had seven villagers, by 1296, 250 people lived in the village. By the fourteenth century, however, poor harvests, the Black Death and French raids on the coast had decimated the village until only one man – Henry Chesman – still called it home. 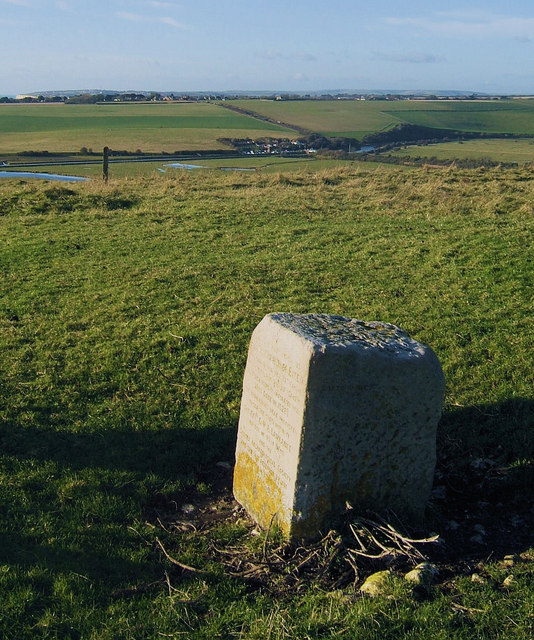 Today, the only sign of Exceat is a memorial stone on the site of the village church. To find it, you can follow this free Wealden Walk from the  Seven Sisters Country Park. Exceat is one of 3,000 deserted medieval villages in Britain. Some are still visible in the landscape, as earthworks, wall foundations and the odd surviving building. You can find out more about DMVs by exploring some of our other Discovering Britain activities.

Along with farming, the main human activity here today is leisure – evidenced by the busy pub, the coast-hopper bus, the coach parties, cafes and bustling visitor centre. According to a recent survey, most visitors cite walking as the main reason they come to the area.

In the aftermath of the First World War, some of those walking the South Downs would have been motivated by different reasons. Many returning soldiers, wounded in body and mind, took to tramping England’s footpaths looking for work, a bed for the night and a sense of belonging.

Go back in the same direction but this time avoid the path along the river. Instead take the slightly higher path on the right. Follow this path, marked as the Vanguard Way, along the valley edge until you reach a stile on the right (just past a large copse of trees half way up the hill). Cross the stile and walk up the steep hill, keeping the copse on your right. Stop halfway up when you have a good view across the valley.

So wrote the poet Edward Thomas. Thomas walked what he called “the long white roads” of Southern England for 20 years and was intimate with the chalk paths of the South Downs.

But his description above is of the land around Arras in France. There he, along with millions of other men, fought and died in the trenches during the First World War. A war that killed 41 million people.

This landscape was certainly not familiar to all the soldiers recruited into the British Army though...

Despite being largely forgotten by the history books, many African, Caribbean and Asian soldiers fought in the First World War. The British West Indies Regiment (BWIR) was formed in 1915 as a separate unit within the British army. The first recruits sailed from Jamaica and arrived to train here at what was then Seaford camp.

These men had answered the call to help fight for their ‘Mother Country’ and travelled to Britain at their own expense. Despite this, many were offered poor accommodation, were issued with insufficient food and clothing, and suffered in the harsh British winters.

Despite their sacrifice, black soldiers were often assigned dirty and dangerous jobs. These included loading ammunition, laying telephone wires and digging trenches - all vital work in the support of front line troops. They were mainly led by white officers and most were denied the chance to fight in Europe.

‘The Black Soldiers Lament’, an anonymous poem of the time, evoked their experience on the Western Front:

Stripped to the waist and sweated chest
Midday's reprieve brings much-needed rest
From trenches deep toward the sky.
Non-fighting troops and yet we die.

By the end of the war in 1918, the BWIR had lost 185 soldiers in battle but a further 1,071 from illness. If you have time, do visit Seaford Cemetery. Among the 300 Commonwealth War Graves are 19 headstones commemorating the men of the BWIR, along with a plaque remembering their service on the chapel wall.

Now we’ve reached the end of the walk, it’s worth reflecting on our experience of this landscape. We’ve seen stunning views and walked along the bank of a meandering river.  The Cuckmere Valley is a haven for wildflowers and animal life – whether it be the butterflies, dragonflies and bees on the chalk downland or the sheep and cows grazing the water meadows. It’s a landscape so beloved, it was used in wartime propaganda posters urging people to fight for the essence of England. It’s a landscape of memorial too for its role in both World Wars and for the untold story of the African, Caribbean and Asian soldiers, trained and stationed here, who offered to fight for Britain at great personal sacrifice.

Continue up the hill and aim for gap in the scrub at the top. Climb over the stile, turn right and follow the broad track back to the car park.

A circular walk around Cuckmere Haven near the Seven Sisters

The Cuckmere Valley near Seaford in East Sussex is one of the most popular beauty spots in southern England. In spring the valley sides are lush with wildflowers, soft-eyed Jersey cows lazily graze the water meadows and the looping river Cuckmere curves sinuously to the sea.

In the distance the bold white cliffs of the Seven Sisters dip and rise like a fairground ride, and stand as a symbol of British fortitude.

But beyond its visual beauty, this idyllic landscape has other stories to tell - of conflict, sacrifice and forgotten heroism.

Why does Britain’s tallest man live on a Sussex hill?

The devil in the detail

Where has all the water gone from Devil's Dyke?