Away from the roar of the M25, you might be surprised to find the quaint village of Chevening. It looks ‘typically English’: a quiet country lane, sheep grazing the gently rolling hills, a scattering of cosy cottages with a striking church at the centre. There’s even an old-fashioned red phone box.  But look more closely and a few questions might strike you.

Why for instance are there so few houses in the village? Why is there such a large church for such a small population? And what’s hidden out of sight behind the high brick wall?

The answer is Chevening House, an English country house (also known as a manor house), originally built for a member of the aristocracy. The grand house, tucked behind the high brick wall, is the reason the village exists. Chevening is what’s known as an ‘estate village’; it was built by the lord of the manor to house his workers and tenant farmers.

Chevening House and estate is also the reason for the large church. Over the centuries, subsequent landowners enlarged the church to house their family tombs. It’s worth a look inside while you’re here. Jane Austen’s uncle was the rector from 1813-1851 and some people claim that Chevening House inspired Rosings Park in her novel Pride and Prejudice.

Walk through the churchyard, keeping the church on your left and exit via a gate. Keep straight ahead on an enclosed track. Continue along the left-hand edge of the field to enter a second enclosed track. Keep straight on until you reach a house by a road . Turn left onto the road, passing Turvins Farm on the left. About 100 yards after the farm, turn left over a stile and walk along an enclosed path. Continue up the right-hand edge of the field, veering left and uphill through a gate. Stop when you reach a bench on the hillside.

Take a moment to rest on the bench here. From this elevated position we start to get a good view of the landscape.  We can also see how it has been shaped and remodelled by people. On the other side of the motorway, see if you can spot the urban sprawl of Sevenoaks nestled on the hill above Bradbourne lakes. 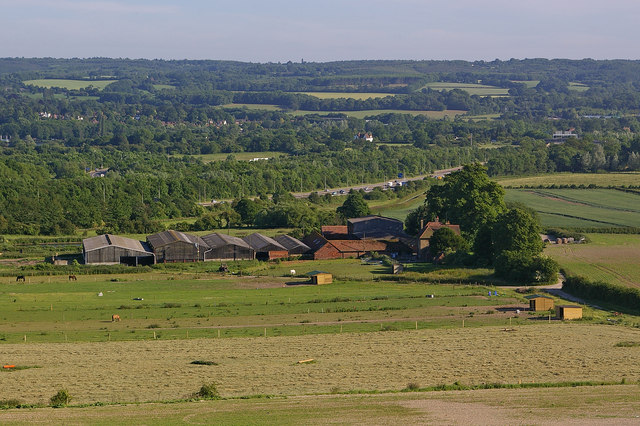 Once you’ve got your breath back, you might be wondering why have we gone from flat land to this bracing climb? This steep hillside (or ‘scarp’) is part of the North Downs: a ridge of chalk hills that stretch from Farnham in Surrey all the way to the White Cliffs of Dover.

With the dramatic scarp rising behind and a pretty covering of woodland, the Downs provided the right kind of picturesque setting for an English country house. From here, you can see St Botolph’s church quite clearly. Just to the right of it, through the trees is the redbrick Chevening House. The long, grassy, tree-dotted pasture running behind the house is the estate parkland. This landscape has been entirely shaped by Chevening’s landowners for their pleasure. 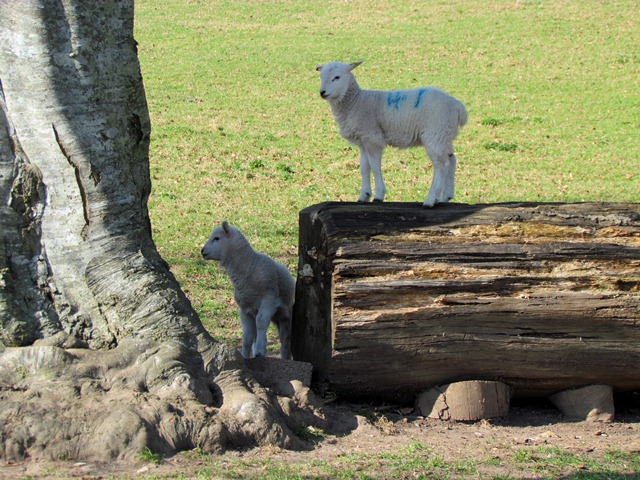 But though designed for pleasure, this was also a productive economic landscape. You can probably see sheep grazing the pastures. Sheep farming (particularly in the Middle Ages), was a very profitable business and a chief source of income for the lord of the manor. Inside the church you can read about an Act of 1667 which ordered all dead bodies to be buried in wool to boost the declining wool trade!

Keep along the right-hand edge of the fields with the woods on your right. At the top, turn left and continue along the top of the fields, keeping woods to your right to reach a gate near a red and white pole. Go through the gate and head a quarter left aiming for corner of wood. Bear left around corner of wood and follow field edge, keeping woods on left for quarter of a mile. Where field boundary swings left, ignore a kissing gate in left corner and veer right to cross a stile on left. Follow path through a wood. At the end cross a stile into a field. Turn right along edge of field, keeping hedge to your right, to a gate. Pass through gate, turn right for 10 yards then left into large field. Follow left-hand edge of field going through gates until you see a bench and gap in the woods to your left.

This narrow strip cut out of the woods, just a few metres wide, is called the ‘keyhole’. You can see Chevening House through the gap, framed like a picture .

The Keyhole was designed by Lord Chatham around 1777 as a place to stop and admire the house while out horse riding through the estate. Chatham had let the house from his cousin, the second Earl Stanhope, but during his 10-year lease managed to make several changes, particularly to the parkland, including the ‘rides’ and avenues we can still see today. The keyhole is a good example of how the natural landscape has been literally shaped for aesthetic pleasure. 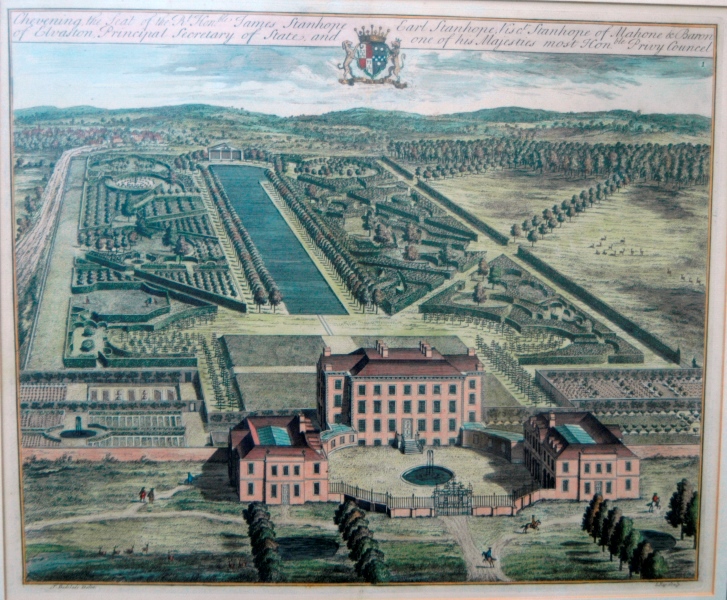 Jane Austen wrote in Pride and Prejudice: “But of all the views ... which the country, or the kingdom could boast, none were to be compared with the prospect of Rosings, afforded by an opening in the trees that bordered the park”.

Could this view of Chevening be the inspiration for this line?

If you look beyond the house, in the distance is a reminder of one of the most dramatic ways that people have shaped the landscape - the busy M25. It’s easy to forget just how close we are to the motorway and to the capital. Look in the opposite direction, across the field to our right, and you might be able to see the towers of Canary Wharf, about 16 miles away. Even on this quiet spot on the North Downs, the modern world is always nearby.

Continue along the left-hand edge of the field with the woods on your left. Follow the path as it bends right, passing a brick wall. Continue to a kissing gate and a gas meter on the left. Follow the track through the woods, bearing left at a North Downs Path arrow to reach a stile. Cross the stile and turn left along the edge of the field for 200 yards to a road. Turn left into the road and walk downhill for ½ mile until you reach Keepers Cottage on the left. Pass the cottage then turn immediate left through the yard and go straight ahead on a broad track into woods marked ‘bridleway’. Follow this track ahead, ignoring paths to the left and right (with ‘keep out private’ signs) to bear downhill. Pass a bench on the right (with another nice view). Descend the left-hand edge of the field, crossing a stile and keeping the woods on your left. When you reach a wire fence, turn right (with fence on left) and follow a track to the main driveway. Stop here.

Chevening, with its grand manor, ornamental gardens and landscaped park, is typical of the English country house. It’s also a survivor from another age. Over 2,000 country houses have been lost since 1900, 70 in Kent alone.

The country house dates from the early sixteenth century. Before then, nobles lived in castles and forts they could defend from both real and imagined enemies. With a strong government and legal system in place, the wealthy could now relax in defenceless houses, employing large numbers of staff to run their estate, managing their land and farming interests. The landowners were free to pursue pleasures like hunting and riding.

During a major agricultural depression in the 1870s, however, many rural labourers fled to the cities for to work in manufacturing and industry. The decline of the land-owning classes began. An increase in inheritance tax and the effects of the two World Wars, also helped to sound the death knell.

Among the men killed during the First World War were many heirs to country estates. When they didn’t return to inherit, the family line also died out and their houses were demolished. In the Second World War meanwhile, country houses were requisitioned as hospitals or administrative buildings. 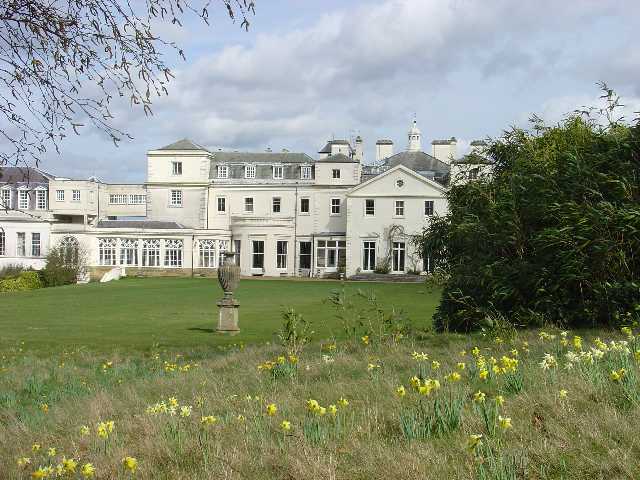 But Chevening escaped this fate. The last owner, the final Earl of Stanhope, had no children to pass it on to. So he set the house up as a private trust for use by the British government.

Today, the estate is used as a country house for an official nominated by the Prime Minister. The current occupier is Boris Johnson but during the last government it was granted to the Deputy Prime Minister, Nick Clegg.

As the Foreign Secretary’s country home, who knows what global plans are hatched in this quiet village. Even in the 21st century, Chevening remains a seat of power, with influence far beyond the limits of its own estate lands…

Cross the drive, go left over the stile and turn right.,Keep the wire fence to your right as you follow the edge of the field. Cross another stile, go over a drive and cross another stile with signpost to St Botolph’s church. Keep straight along the right-hand edge of the field to a stile by the woods. Cross this stile and turn right onto an enclosed footpath. Follow this footpath between the fields until it emerges at the gateway into St Botolph’s churchyard.

This walk takes you from the pretty ‘estate village' of Chevening onto the dramatic scarp of the North Downs.

Wander through ancient woodland to discover a perfectly framed view. Enjoy sweeping vistas of traditional farmland juxtaposed with the roar of the M25.

Walk in the footsteps of ancient wayfarers along the Pilgrims Way and find out how much this country estate, nestled in the foothills of the Downs, has shaped the landscape around it and our global political scene.

When English country houses fell into decline, many of their elaborate staircases and mantelpieces were shipped to the United States to lend ‘history’ to American mansions

From hops to lavender