Why do the road and railway make such a high detour to cross the Grampian Mountains?

On paper Drumochter Pass may seem like a strange place to cross the Grampian Mountains. It involves quite a detour from the obvious straight line that runs between Edinburgh and Inverness.

There are two obvious shorter passes to the east. The Gaick Pass is 5.5 miles shorter while the Minigaig Pass is a whole 15 miles shorter. Unfortunately neither are particularly safe alternatives.

The Gaick has one major problem and the clue is in the name. ‘Gaick’ is Gaelic for ’cleft’, and refers to the central section where the route runs through a narrow mountain corridor that is notorious for avalanches. Although it is only 30 metres higher than Drumochter, travellers have been killed here. In a famous 1800 incident known as the Loss of Gaick, a bothy (hut) with five people inside was buried beneath several feet of snow. 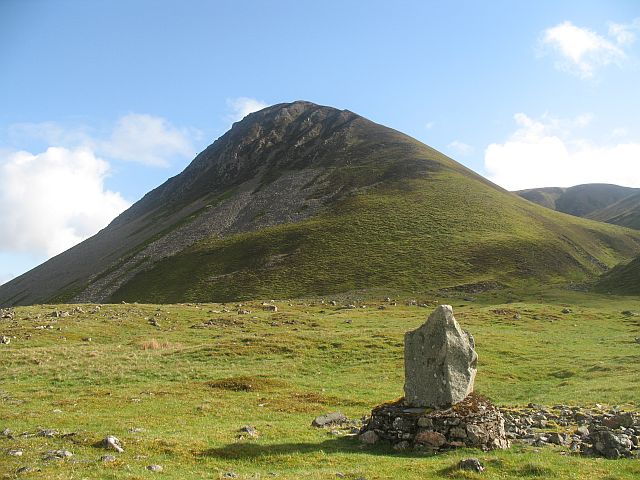 As for the Minigaig, there’s nothing ‘mini’ about it. The name probably comes from the Gaelic ‘Moine’, meaning ‘moss’. The route climbs to a height of 825 metres on bleak moors that are snowbound all winter.

Despite the big detour, Drumochter Pass is wider, safer and more practicable as a through-route. Just look at how the relatively gentle ground we are standing on contrasts with the mountainsides that rise like walls to either side of us. This is all thanks to a lot of ice!

During the peak of the last Ice Age (around 18,000 years ago) Scotland was covered by ice, with glaciers up to 4000 feet thick in places! Drumochter Pass was scoured out by one such great glacier, which pushed through the mountains and left behind a flat-bottomed trench. Many millennia later this offered a much more attractive routeway through the range.

A road runs through it

The first road was built here by General George Wade in the 1720s. The road was one of several he was tasked to build in the Highlands following clan rebellions aimed at restoring the exiled King James to the throne. A new road network was required to aid the deployment of government troops.

General Wade’s road was little more than a rough track. It would be another century before the road was improved by engineer Thomas Telford. To pay for the work, travellers were charged a much-hated toll. Northern cattle drovers, who needed to cross the Grampians to take their herds to southern markets, were so infuriated that they resorted to old drove roads such as the Minigaig instead. The surface of the moor was also kinder on the cattle’s feet than the rough pre-tarmac road. Today’s travellers have the Roads and Bridges Act of 1878 to thank for the removal of the toll.

On the west side of the road the Highland Railway from Edinburgh to Inverness also takes advantage of the flat-bottomed Drumochter Pass to cross the Grampians, reaching the highest point in the British rail network at 452 metres. 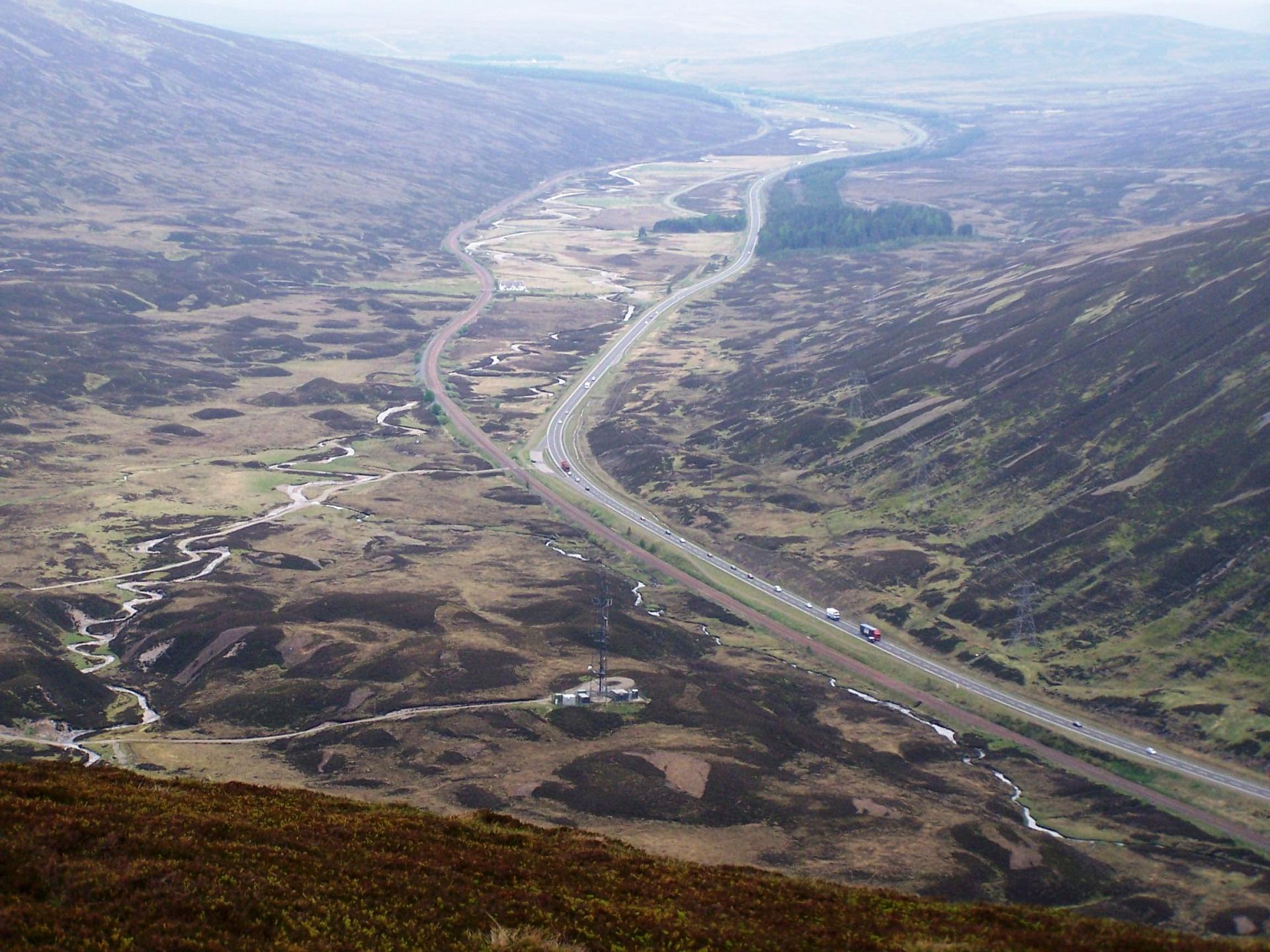 We take the railway’s existence for granted today, but when the line was proposed in the 1860s the prospect of a steam train roaring through the Highlands triggered one of the country’s first great environmental debates. The huge resistance to the building of the line was encapsulated in a poem by poet and academic Principal Shairp.

Nay! whate'er of good they herald,
Whereso' comes that hideous roar,
The old charm is disenchanted,
The old Highlands are no more.

Even today environmental issues continue to plague Drumochter. The latest concerns the recent upgrading of the electricity power line that you can see running parallel to the road on its east side. Conservation bodies objected to the erection of the huge, visually intrusive pylons, each 42-65 metres tall, but all alternative options were considered too expensive. What do you think of these industrial-age intrusions into the pristine heart of the Grampian Mountains? Progress or desecration? 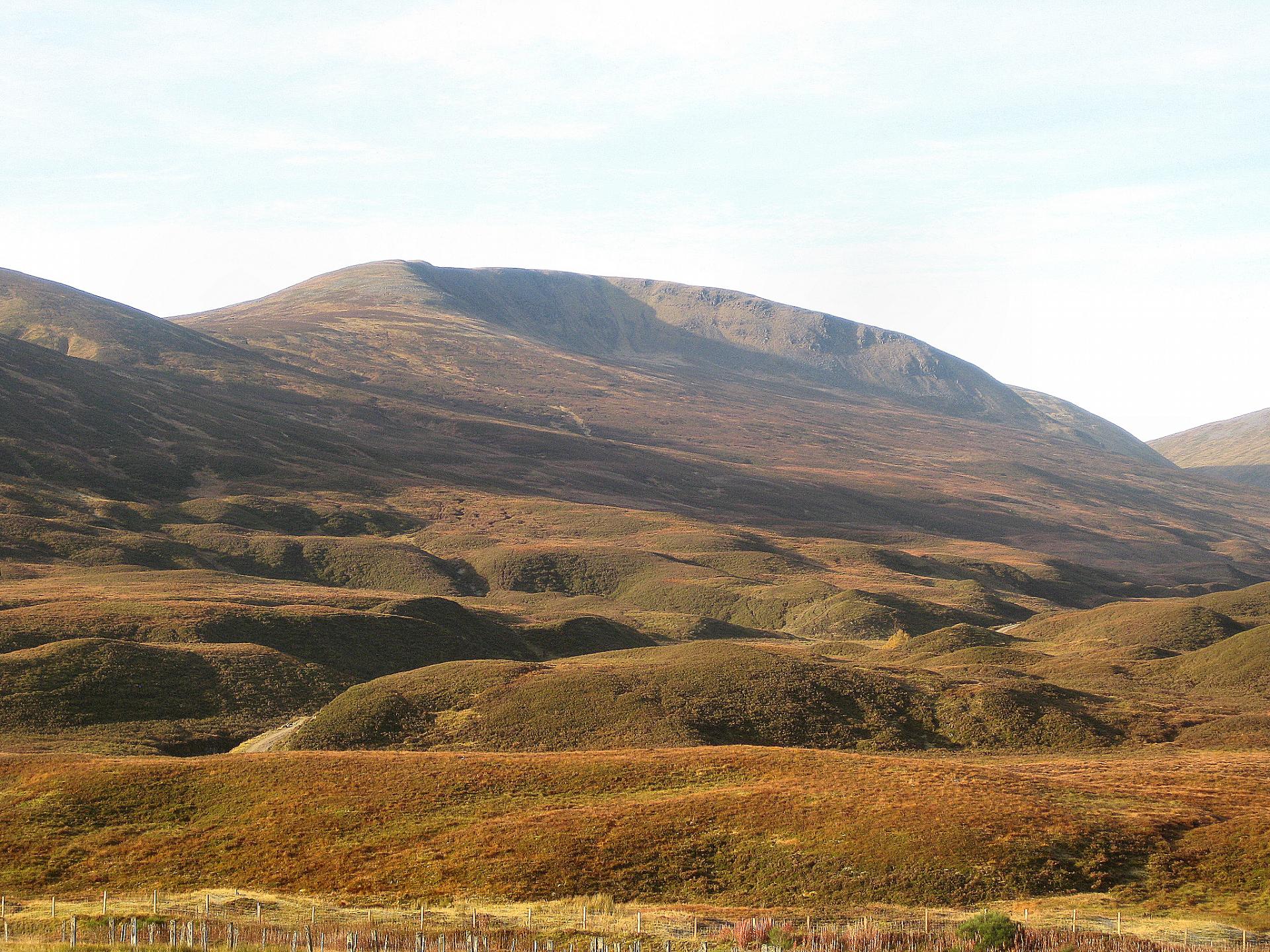 Look on the west side of the road and you’ll see that the foot of the mountainsides are pockmarked into heather-topped humps and hollows like an enormous egg box.

This is classic hummocky moraine formed by ‘dead ice’. At the end of the last Ice Age (around 13,000 years ago) the glacier that formed Drumochter Pass began to melt and retreated through the mountains. As the ice stopped moving and began to melt in situ it became known as dead ice. All the rocks and semi-frozen material the ice was carrying were deposited; leaving behind these lumps and bumps that we can see today.

Taking up over half the land area of Scotland, the Grampian Mountains are a mighty natural barrier that separates the Northern Highlands from Scotland’s central belt. To connect the key cities of Edinburgh and Inverness, both the A9 and the Highland Railway had to find a way through this massive chain.

Several passes provide through-routes and you’d think road and railway would take the shortest, but this is not the case.

If you are driving north, by the time you’ve reached this viewpoint, the road has taken a long loop west and is about to curve back east. We are now at the 460m-high Drumochter Pass.

Why do the road and railway make such a high detour to cross the Grampian Mountains? Click to reveal the answer

Ralph Storer for creating and photographing this viewpoint. Ralph is a writer and photographer with a passion for the Scottish Highlands. His publications include the best-selling series The Ultimate Guide to the Munros, available online or from Luath Press Ltd.

Helen Rawling for editing the viewpoint

Richard Webb for the image  of the Monument to the Loss of Gaick (CC BY SA 2.0 via Geograph)

Mick Knapton for the image of Drumochter Pass from Boar of Badenoch (CC BY-SA 3.0 via Wikimedia Commons)

Stranger with the pile of luggage proudly labelled for Portree
How I wish, this night of August
I were you and you were me!
Think of all that lies before you
When the train goes sliding forth.
And the lines athwart the sunset
Lead you swiftly to the North.
Think of breakfast at Kingussie
Think of high Drumochter Pass.
Think of Highland breezes singing
Through the bracken and the grass.

Looking into the abyss of time

How did the Scottish Highlands become home to Britain's biggest bog?

What makes Braemar in Aberdeenshire such a record breaker?