Welcome to the Devil’s Staircase!

On this trail we will explore why a road was built up the side of a mountain, rather than along the valley bottom, and how it acquired its sinister name.

From the Altnafeadh car park, on the side of the A82, look for the green sign marked ‘Public footpath to Kinlochleven by Devil’s Staircase’ and the well-defined stone track and follow this up the side of the hill. Stop when you reach a little wooden footbridge crossing a stream.

Stop by the bridge and look back down the path you have climbed, into the valley of Glen Coe.

With a wide, flat bottom and steep, smoothed sides this is a classic U-shaped valley, formed by an Ice Age glacier. The ice in glaciers actually flows very slowly, and as the ice moved through the valley here it scoured the ground and sides of the mountains until they were smooth. If you look to your right you can see another good example of a U-shaped valley – this time, the smaller Lairig Gartain.

If you were travelling to the towns of Kinlochleven or Fort William today you would follow the road along the valley’s flat bottom, rather than try to climb the mountains. However, this has not always been the preferred route. From the 14th century onwards people used a track that went straight up the steep mountainside!

This track was a ‘drove road’. Before railways, ships and lorries offered quicker alternatives herders used paths like this one to move their animals from pasture to market. A network of drove roads existed across Britain and drovers regularly walked tens, even hundreds, of miles with their animals.

Although it may seem like an odd route to choose, with a steep climb up a mountain pass, this path meant herders could get their animals from the highlands and islands (like Skye) to markets in Central Scotland without having to cross any of the local lochs - cows are not renowned swimmers! Imagine cattle pausing to drink at this stream before making the climb to the pass. Let’s follow in their footsteps now.

Cross over the footbridge and follow the path upwards. After 500m you will pass two boulders to your right and the path bends to the left. Stop where a stream crosses the footpath, the banks of the stream are lined with rocks and there are three stone steps on the other side.

Look down at your feet. The path we are on today is well laid out and lined with stones. As a drove road it would have been little more than a dirt track.

So what happened to change things and convince people to build a proper road up here?

To understand what happened we actually have to look to the throne. In 1685 James II became King of England and Scotland. This was only a couple of decades after the Civil War, and whilst the monarchy had been restored, Parliament was keen that no king should have complete power and that Britain should be a Protestant nation. Protestant political elites were nervous of James II who seemed to be pro-Catholic and flexing his might, so in 1688 they forced him from the throne and installed his daughter Mary and her Protestant husband William as king and queen instead.

This upset many Scottish Highlanders who wanted their Scottish king back, and who were Catholic themselves. Such feelings remained strong over the decades. In 1714, for example, Queen Anne died and she was replaced by a distant Protestant relative instead of a closer Catholic one.

Many Highlanders wanted James II’s son, who called himself James III, to become king instead. Supporters of James called themselves Jacobites, after ‘Jacobus’ the Latin for ‘James’ and in 1715 they tried to stage an uprising.

In 1745 the son of ‘James III’, who was known as Bonnie Prince Charlie, took up the Jacobite cause and raised an army of Highlanders to march south to try to regain the throne for his family. These Jacobites got as far as Derby before retreating. They were finally defeated at the Battle of Culloden (near Inverness) in 1746.

Such events made the British Parliament nervous and they decided the remote Scottish Highlands needed to be patrolled to keep an eye on rebels. They commissioned a network of military roads to be built so troops could be rapidly deployed as required. The road-building was run by General Wade, and later he was succeeded by General Caulfield. 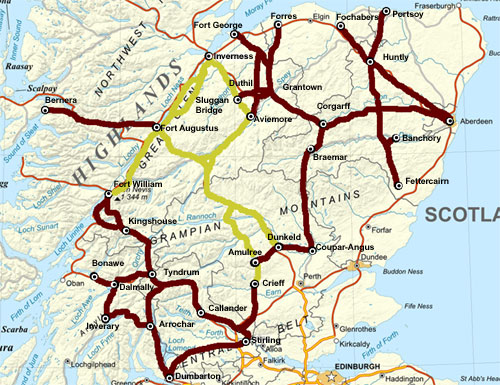 In 1752 General Caulfield built the road between Tyndrum (in the south) and Fort William (in the north west), including the stretch we are on now. He used teams of soldiers to convert the drove road into a military road, with more men standing guard to protect them from any Highland rebels.

The English used geography to map and get to know the land, enabling them to produce an infrastructure to control the area. Across the world, powerful people often use geography to understand the land and dominate other people within it.

Cross the stream and continue along the path as it gradually curves round to the left. The path meets a small but steep-sided gully, with water flowing in the bottom, and then bends off to the right. Stop here

The trail is becoming a bit of a tough slog, but we can at least be thankful that we don’t have to pull a heavy gun carriage with us, as the patrolling soldiers did in the 18th century. It was the weary soldiers who nicknamed this stretch of road ‘the Devil’s Staircase’!

So why on earth did they choose this steep route for the military road instead of the bottom of the valley?

Marching troops along the valley bottom would have made them much more vulnerable to attack. The natural landscape of rugged hills and hidden valleys provided ideal terrain for Scottish rebels to attack the troops and then disappear into. If you look across the valley you can see a basin tucked just below the peaks. This feature is known as a ‘corrie’. It was formed thousands of years ago by ice collecting in a hollow and scouring out a deeper bowl. It would have made the perfect place for rebels to hide and make strikes on the English army in the valley below.

The other problem with a route along the valley bottom was Loch Leven, which the troops would need to find a way across. As the drovers before them had found, the best way to reach settlements in the north was to cross the mountains by using this path.

While this may have been the best way, it was by no means easy - as you will have realised! The mountainsides are steep and the path has to zigzag to continue on up.

Follow the path as it zig-zags upwards until you reach a cairn built on the right-hand edge of the footpath.

If it’s a clear day, turn your back on Glen Coe and see if you can catch a glimpse of water shimmering in the gaps between the peaks ahead and to the right. This is the Blackwater Reservoir; it features the longest dam in the Highlands at over 900 metres long.

The reservoir was built in 1907 to provide hydroelectricity for the aluminium works in neighbouring Kinlochleven. No mechanical machinery was available so the entire dam was built by hand using teams of workmen. Life was tough for the men; they lived in camps in the rugged mountains around the reservoir, braving all weathers.

When the men got their wages they liked to go to the pub for a treat. The nearest one was the Kingshouse Hotel in Glen Coe, so they walked down this road to enjoy a night out. However, the journey back up the steep slope on unsteady legs often took people by surprise. On stormy winter’s nights some men didn’t survive the return journey. Their colleagues would say ‘the Devil had claimed his own’ so the nickname ‘the Devil’s Staircase’ continued.

Between the 18th and 20th centuries many large engineering projects in Britain, such as railways and canals, relied on manual labour from big teams of men. The men were often called ‘navvies’ (short for navigators) and their life was hard. They were usually poorly paid and lived in squalid temporary accommodation. Many men died from the ever-present dangers of malnutrition, exposure and disease. Today you can still see concrete markers at Blackwater Dam indicating the graves of workers.

Continue along the footpath until you reach the top of the pass, which is clearly marked with two cairns

6 Top of the pass

Congratulations, we have reached the top of the Devil’s Staircase and survived to tell the tale! We are now on the edge of the Aonach Eagach Ridge. On a clear day you can see Ben Nevis and the Mamore mountains ahead, and Glen Coe behind.

At points on the climb you may well have sympathised with the workers who walked this way in the past, and agreed with them that this is a devilish road. Unlike them, however, we have the time to enjoy this environment without having to toil in it. For us the Devil’s Staircase is a place for exercise and pleasure, where the views from the top certainly make the climb worthwhile. Today the road is well used by hikers and mountain bikers as the rugged terrain and steep slopes make a great challenge.

This trail has explored the variety of ways the road has been used over its history; from droving to defence, and from transport route to tourist track. While it was hated for hundreds of years by soldiers and workers forced to trek up and down its steep winding route, today the Devil’s Staircase is one of the most popular sections of the West Highland Way!

Retrace your steps back down the Devil’s Staircase to the car park.

Welcome to the Devil’s Staircase!

On this short walk we will explore why a road was built up the side of a mountain, rather than along the valley bottom, and how it acquired its sinister name.

Helen Rawling for creating this trail

"All the way, the road had been among moors and mountains with huge masses of rock … giving it the aspect of the burial place of a race of giants … anything so bleak and wild, and mighty in its loneliness, it is impossible to conceive"
- Charles Dickens (writing on Rannoch Moor in the valley below)

How did the Scottish Highlands become home to Britain's biggest bog?