How did this empty tunnel help ‘sweeten’ the landscape?

As you enter the tunnel it takes a while for your eyes to adjust. You might want to switch on your torch and look around or just allow the darkness to envelop you. Look up and you’ll see a roof of elegantly curving bricks. At regular intervals a number of arched entrances allow a beam of light to flood in.

Today you’re probably the only person brave enough to enter this damp, dark world but this was once a dirty, noisy, hot and dangerous hive of activity…

This tunnel was built in the 1870s as part of an industrial size lime kiln.  In the nineteenth century lime was an important product in both rural and industrial Britain. Farmers spread lime over their fields to ‘sweeten’ or improve the soil and increase the quality and yield of their crops.

Before cement, lime was also used to make mortar. It was a key ingredient in construction, literally holding buildings together. The ancient Egyptians used it to plaster the pyramids!  It was also used in local industries including leather making, textiles and making paper.

In order to access the lime, first limestone rock had to be quarried from the hills, then heated in huge furnaces (or kilns) to extract the ‘quicklime’. So why is this giant lime kiln found here at Langcliffe? The simple reason is that this area is rich in two key ingredients – limestone and coal.

Limestone blocks from the nearby quarry were brought in and stacked in the burning chamber. Coal, also found locally in underlying rocks was mixed in, and once lit, continually added through small chutes at the top of the kiln. As one chamber burned, waste heat warmed limestone blocks in the next two or three chambers. Using this efficient process, limestone was burned continuously in a circuit around the twenty two individual burning chambers, taking an average of six weeks for one whole circuit of the kiln. Behind the burning zone, two or three chambers were left to cool down at a time before the lime (now a white powder) could be shovelled out and loaded onto railway wagons.

This was dirty and dangerous work. The temperature inside the kiln chamber was very hot. Powdered lime ended up in the men's clothes and boots, and it stuck to their moist skin causing an itchy rash. Lime burners keeping watch over night risked inhaling the poisonous fumes or even rolling into the kilns and being burnt alive.

Beyond the far end of the tunnel, follow the public footpath north for just under 400 yards and you’ll come to another feat of engineering.

A pretty stone built aqueduct crosses over the Settle to Carlisle railway. An aqueduct is a man-made way of carrying water across obstacles. But why is it here?

In the mid1860s the Midland Railway decided it wanted a share of the lucrative London to Scotland passenger traffic, but was thwarted by having to use the lines of its rival company, London and North Western Railway. The only solution was to build a new section of railway bypassing the LNWR line. This meant the construction of numerous tunnels and viaducts across some of the harshest terrain in England.

Where it wasn’t possible or cost effective to build tunnels or viaducts, a much smaller and cheaper aqueduct was built. Here it diverts a stream over the railway. 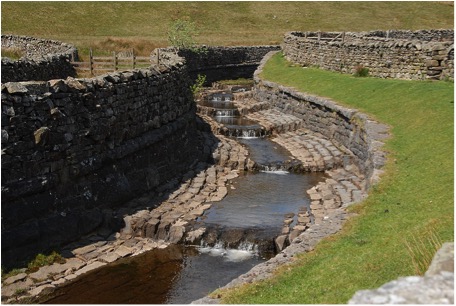 Between the North Yorkshire villages of Langcliffe and Stainforth, just off the main road, is a curious brick building. It looks like a long tunnel, but no trains or other transport have ever passed through.

Now derelict and left to ruin, it once fulfilled an important role in our agrarian and industrial past.

How did this empty tunnel help ‘sweeten’ the landscape? Click to reveal the answer

Caroline Millar for edits and suggestions

"Thou mightst as well say I love to walk by the counter-gate, which is as hateful to me as the reek of a lime-kiln."
- William Shakespeare, The Merry Wives of Windsor