Why is there a farmhouse in the middle of the motorway?

There is an urban myth that when the construction workers building the M62 came knocking, the owner of Stott Hall Farm refused to move. In retaliation the workers simply built the motorway around the farmhouse, leaving it stranded in the middle!

This however couldn’t be further from the truth. In reality, when engineers surveyed for this section of the motorway between 1961 and 1963, a geological fault was identified close to Stott Hall Farm,

The fault was formed millions of years ago when pressure built up underground. Under this great force the rocks slipped, with rocks on the west side of the fault slipping south and those on the east side slipping north.

This was not the only problem. The engineers also encountered something called a ‘solifluction tongue’. A solifluction tongue is a tongue-shaped accumulation of mud and rocks left behind after the glaciers of the last ice age melted (about 10,000 years ago). 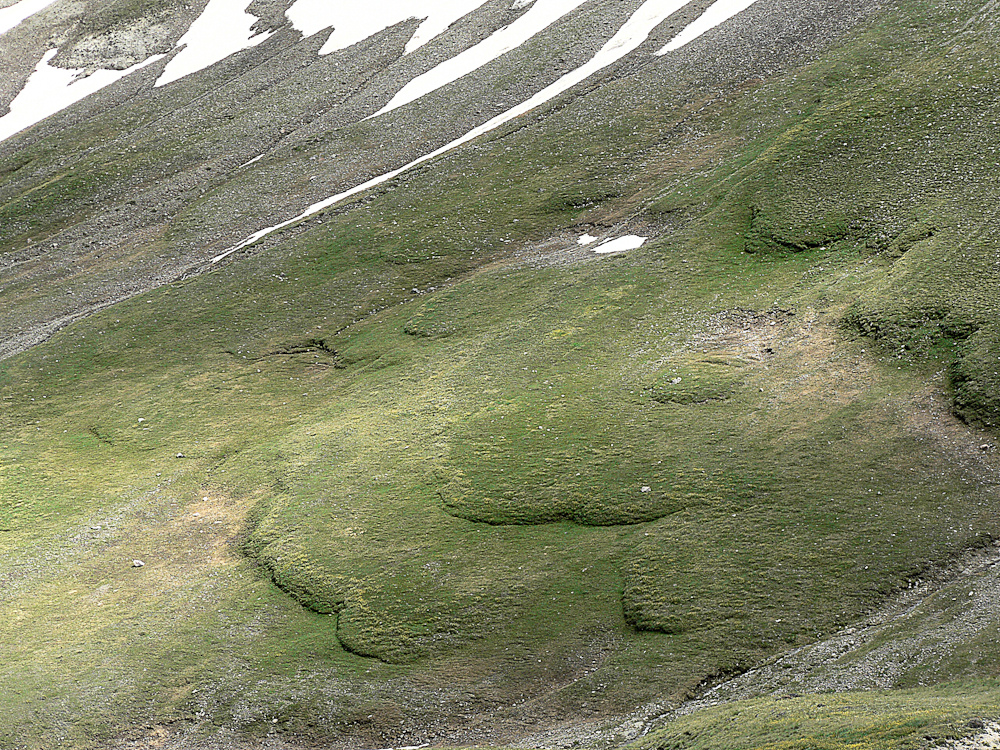 Such accumulations are not particularly stable and under wet conditions there is a risk of landslips. Here we are at one of the highest points of the Pennines, so adding a great weight to the land through the building of a motorway, would only exacerbate the risk.

As a result the motorway had to be split into separate carriageways, with each embankment being anchored into the underlying sandstone bedrock.

Owing to the lie of the land, with a steep slope to the south and Booth Wood Reservoir to the north, it wasn’t possible for both carriageways to follow the same course around the farm. The solution was to send the westbound carriageway one side of the farmhouse and the eastbound carriageway to the opposite side. The area between the two carriageways is about 15 acres so the farmer uses it to graze his flock of sheep. The engineers had to build underpasses so he can get to the rest of his land! 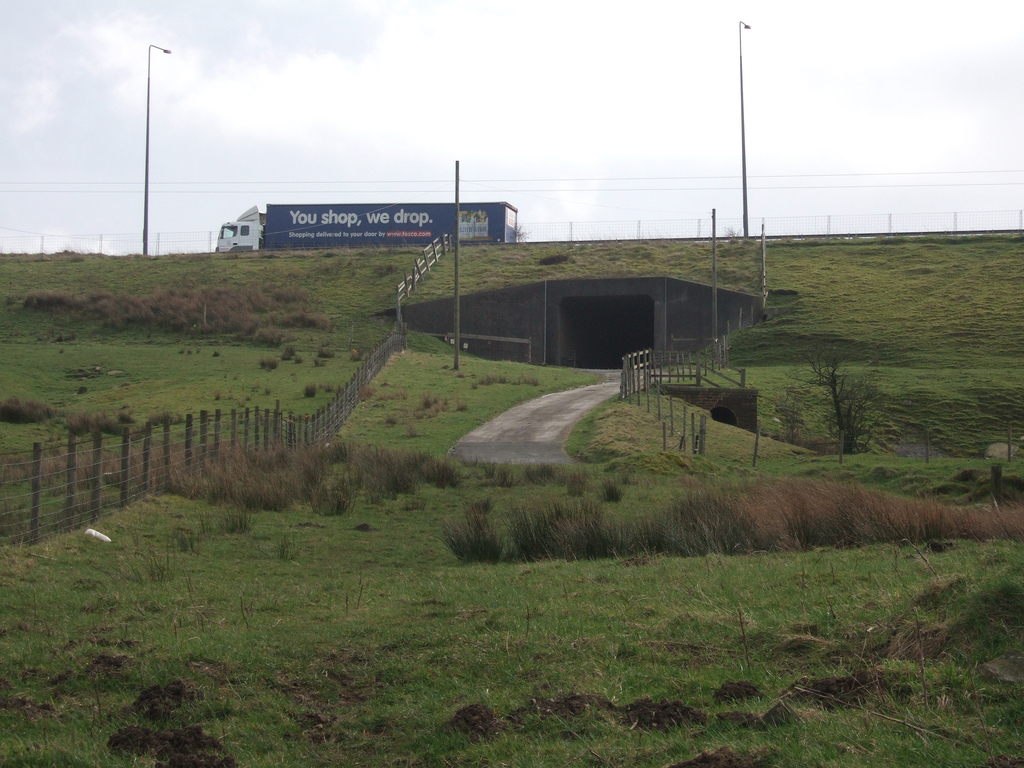 However, the difficulties didn't end here! The motorway builders had to find ways to cross the Pennine Hills, navigate bogs (which stretch for 25 miles from the A57 in South Yorkshire to Walsden just north of here), and battle against harsh weather conditions.

At the time of construction, approximately 100 miles of motorway was being laid in Britain every year. The 13-mile section of the M62 between Outlane (to the north west of Huddersfield) and Milnrow (to the east of Rochdale), however, took over four and a half years! 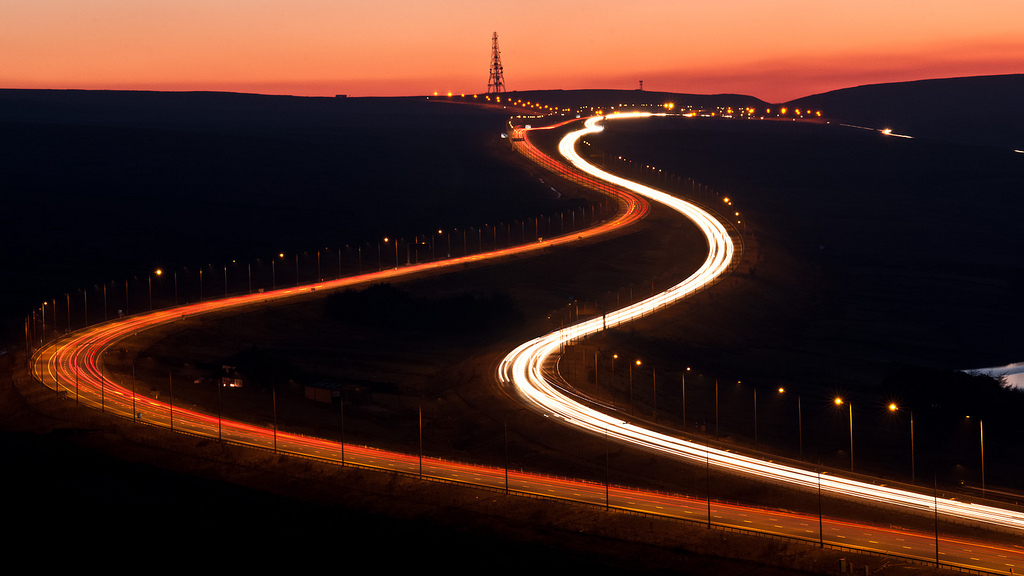 So, why build it here?

Aside from Newcastle, the four largest cities in northern England lie along a roughly straight line; with Liverpool on the west coast, Hull on the east coast, Manchester in the north west and Leeds and the north east. As the economies of these four cities (and the wider regions) grew following the Second World War, more and more people began travelling between them.

The lack of high speed roads meant commuting was time-consuming and costly. By the late 1950s and 1960s the government set about improving British roads with a programme of motorway construction. Many of the new motorways started or finished in London but as the network spread, so did the need to link these four ‘Northern Powerhouses’.

With no way of getting around the Pennine Hills that separated the northern cities over 180 miles, and with tunnels for eight-lane motorways proving far too expensive, the only option was to go straight ’over the hill’. While other trans-Pennine routes already existed, these were often impassable in winter. Some are often closed today, despite our milder weather. The M62 was designed to be ‘the pass that would never be closed’.

The farmhouse could have been just another example of the collateral damage that occurs when it comes to development. However, thanks to a geological fault and a legacy of mud from our glacial past, it still survives to this day - long after many of the cars that first used the motorway have ended up on the scrap heap.

Stuck in the middle

Stuck in the middle

From our vantage point on the Pennine Hills, look down over the bridge at the M62 Motorway 37 metres below.

The cars, vans and lorries snake along the highway like a row of giant ants scurrying about their daily business.

Everything seems so fast, so loud, so busy... except for the one house standing in the middle of the eight lanes! A calm amongst the storm; an island in a sea of tarmac.

Why is there a farmhouse in the middle of the motorway? Click to reveal the answer

Iain Palot FRGS, CGeog for advice on the physical geography

Vaidotas Mišeikis for image of evening haze on M62 (accessed via Flickr and used under CC BY-NC-ND 2.0)

Mark Morton for image of Stott Hall Farm (accessed via Flickr and under CC BY-NC-ND 2.0)

Discover different routeways over and under the Pennines

How did the small town of Halifax become the birthplace of the Industrial Revolution?

Why is there a sandy beach in West Yorkshire's land-locked Pennine Hills?

Search for tiny footprints and deadly diseases in Thornton