Rosedale valley is at the heart of the North York Moors National Park. From the vantage point of the car park, the moorland drops steeply away into a peaceful-looking valley.

Nestled among green fields, Rosedale Abbey is the epitome of a sleepy English village, with honey-coloured houses, a welcoming tearoom and a well-kept village green.

Yet just 160 years ago the air here would have been full of soot and steam. Instead of birdsong, the clanking of machinery and the shouts of men hard at work would have rung in your ears.

This short trail explores how and why this now peaceful area of North Yorkshire once became such a hive of activity. Here at Rosedale Chimney Bank we’ll find plenty of clues to help us piece together the story.

From the car park take the well-defined gravel track leading towards the stone ruins. Stop when you reach them.

As we approach the stone ruins you can see they are actually a series of small archways running along the side of the moor, rather like a miniature railway viaduct. Each arch is only a little taller than a person and although a railway was built here later, these arches are in fact ovens!

In the 19th century British industry was booming, fuelled by an increase in international trade and the development of steam power. Before this machinery had to be driven by hand, horse or water, which was a lot slower.  Steam–powered machinery improved production in industries like mining, textiles and metalwork. Britain led the world in the development of railways and steam ships, which were all built from iron. The appetite for iron led to the construction of the arch-shaped ovens before us.

In 1853 two ironstone exporters discovered there was enough good quality ironstone in this local area to make mining here worthwhile. Ironstone is a type of sandstone rock that contains iron and by 1856 mining began in earnest. To extract the iron the rocks were broken up, mixed with coal, and set alight in these ovens or roasting kilns. The material left after burning had a higher concentration of iron and was much lighter and easier to transport to the ironworks in places like County Durham and Middlesbrough.

Men worked long shifts to meet the demand from the blast furnaces in the north  If we had been stood here 160 years ago we would have felt searing heat from the kilns on our faces. Noise would have filled the air from the clanking and crashing sounds of carriages emptying ironstone from the little tramway running across the top of the kilns, and shouts of busy workers ordering us to keep out of the way as they shovelled in coal to keep the fires burning. This was no place for spectators.

Follow the path onwards and leave the kilns behind. You will pass a row of cottages on the right and then the little footpath joins a wider track. Stop once you have joined the larger track.

As you join the wider track, note how it runs in a smooth line around the edge of the hillside. The track is well cut and distinctive because we are now walking on the former railway line that fed the Rosedale kilns.

Initially horse-drawn carts transported ironstone from the mines down to a railway line at Pickering. This was a slow and difficult journey on poor roads, which often became gummed up with mud in wet weather.

In 1861 a railway line opened to connect the Rosedale mines and kilns with the ironworks on the banks of the River Tees. The railway ran along the western edge of Rosedale valley, across the moors and down the Cleveland Hills until it connected with the line to Middlesbrough.

Trace the track as it snakes off ahead of us and imagine the little train pulling its precious cargo off into the distance. It was a great leap forward for the mining industry here – before the railway about 4,000 tons of ironstone was transported out of Rosedale, but in 1865 alone 250,000 tons were removed!

Besides the line of the old railway there are other clues in the landscape that tell us this was once an industrial area. The row of cottages we just passed was built to house railway staff; there were once 16 cottages but just 4 remain. Initially the miners were housed in barracks – basic accommodation for men only. But the railway brought an influx of people looking for work so terraced cottages sprang up across the dale to provide housing for them and their families. In fact the population here more than trebled by the end of the 1860s.

Follow the former railway track as it crosses the moor. Pass through a metal gate and around the hillside until you reach a stone and wooden bench to your right.

This bench was created by local sculptor Vivien Mousdell in collaboration with the local community and the primary school in Rosedale Abbey to reflect the area’s mining heritage. The nearest mine was Sheriff’s Pit, just a little further on around the hillside. Ironstone was dug up from underground and hauled about 270 feet to the surface using a large metal structure and wheel called winding gear. All of this has now gone. 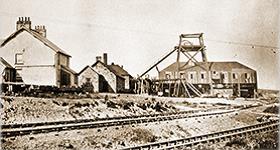 Take a good look at the carvings around the bench, inspired by the children’s drawings. Two short poems imagine different parts of the miners’ day:

“Working hard in the dark, loading up the wooden cart”

“Work shift over, in the sun, on the hill, having fun”

The miners’ lives were not as easy as this might suggest though! They had no protective clothing (or equipment) and accidents, such as roof collapses and collisions with mine carts, were common. The men worked long hours in the dark while women and children often walked miles across moorland to the nearest shops and school. Temporary workers lived in ‘bothies’, huts built from timber and turf along the route of the railway. It was their hard work, and that of other workers in the iron industry, which helped generate the wealth to make Britain one of the world’s leading economies.

Today this is a place of peace and retreat; we can relax on the bench and enjoy the views over Rosedale Abbey below. The toil and hardship of 160 years ago is mostly invisible to us now but a few indicators like this bench can help us recover some of the stories from this time.

From the bench retrace your steps back along the old railway line. Continue along the track until you reach the metal gate

Stop by the gate and take a good look down into the valley below. Compared to the scrubby grass, heather and rocky ground we are standing on, how does it look in the bottom of the valley?

While the hillsides are formed of sandstone and mudstone, which only produce thin soils, the bottom of the valley is covered in clay and silt. These produce much richer soils, hence the greenery and patchwork of little (arable?) fields we can see below. The reason for this lies 10,000 years ago when glaciers covered the valleys but not the higher parts of the moors. The ice in the glaciers flowed very, very slowly. As it did, it gathered up fine particles of rocks and soil. When the climate warmed up the ice deposited these particles in the valley bottoms forming the clay and silt soils we find today.

These soils are good for growing crops so small settlements sprung up where people tended allotments and kept livestock. The higher moorland was less productive, so remained less developed until the discovery of ironstone and birth of the mining industry.

Some locals claimed they always knew there were riches to be found on this part of the moor. A cliff only half a mile east of here was often struck by lightning and people said it meant treasure was buried beneath. In fact, the cliff was made of the same high-quality ironstone which attracted the lightning. This ironstone became incredibly valuable to the iron industry, so it did bring ‘treasure’ to the area - for some at least.

On the other side of the gate the path splits in two. Take the right hand fork (the highest branch) and follow it gently uphill (we are following the old railway still here). Stop somewhere along this track when you need a breather.

As our trail draws to a close and we head back towards the roasting kilns an obvious question arises – what happened to the industry that was once here?

There was only a relatively thin band of the highest quality ironstone in the ground. Once this had been extracted the miners switched to working inferior ironstone, but this produced much less iron for the work they put in. By 1879 only 25,500 tons were mined: one tenth of what had been extracted just 15 years earlier.

As the quality of ironstone dwindled, men moved on to other mining areas where there was more work.  The population declined and in 1911 the mines closed down. The mines on the east of Rosedale valley (the opposite side to where we are) reopened during the First World War as iron was in demand for making shells and the posts for barbed wire defences in the trenches. Production finally ceased in 1926 and just 3 years later the railway closed too.

Today it is cheaper for Britain to import iron and steel from other countries than mine and produce it at home. Iron and steel are brought in from China, Russia and Spain, while iron and steel products, such as cars, are imported from Japan. Many of Britain’s remaining steel works, like Redcar in Teesside, are facing closure because of the quantity of cheap steel coming in from China. It is highly unlikely that iron mines and kilns will ever feature again in our landscapes - so the remains we have seen today offer a chance to appreciate an industry that once shaped Britain.

A short walk in the scenic North York Moors

Nestled among green fields at the heart of the North York Moors National Park, Rosedale is the epitome of a sleepy English village, with honey-coloured houses, a welcoming tearoom and a well-kept village green.

Today the view from the car park is of moorland droppnig steeply away into a peaceful-looking valley. Yet 160 years ago the air here would have been full of soot and steam.

Instead of birdsong, your ears would have rung with the clanking of machinery and the shouts of men hard at work.

Explore how and why this now peaceful area of North Yorkshire was once such a hive of activity. Here at Rosedale Chimney Bank we’ll find plenty of clues to help us piece together the story.

Helen Rawling for creating and photographing this trail

Caroline Millar and Rory Walsh for suggestions and edits

Rosedale has nothing to do with roses! In the 9th century Viking raiders attacked the Yorkshire coast , which became part of a Danish kingdom. Rosedale’s name may have Viking origins – from ‘Rossi’, which could be a person's name or the word for horse, or from ‘rhos’ the Viking word for moor.

Explore how a remote location has helped and hindered Ravenscar

What created the distinctive peak of Roseberry Topping?

Why was a factory in York sweet inside and out?