What secrets does Swansea's glossy marina hold of a booming metallic past?

A closer inspection of the marina reveals why this used to be an area of heavy industry. The boat filled water takes the shape of a clear, rectangular basin and is in fact a dock. Constructed in the 1800s it was, and still is, known as South Dock. In contrast to the leisure boats you see today, during this time it would have been full of much larger cargo ships.

While such an image may seem incongruous to the present scene, by rewinding 200 years we can begin to understand why.

The rocks underlying Swansea actually hold the natural resource of coal, which was formed 290 thousand years ago. In the 18th century, as the Industrial Revolution started gaining pace, Swansea became a centre of activity. Industries such as copper smelting and ironworks required the use of this resource as four tonnes of coal are needed to smelt every tonne of copper-ore. Expanding companies were drawn to this area to seek economic success through industry. As more and more industry became focussed here, transport became a key element.

Wales as a whole by 1820 accounted for over 50 per cent of the world output of smelted copper. This was due to a high demand for copper as a material in building ships and then in the late 1800's for conducting electricity. This needed transporting all over the world to meet growing demand. In response to this, a series of docks, including South Dock, were built on Swansea’s coast. By the mid to late 19th century Swansea was a centre of prosperous industrial activity exporting to places as far away as India, and lending Swansea the name of Copperopolis. 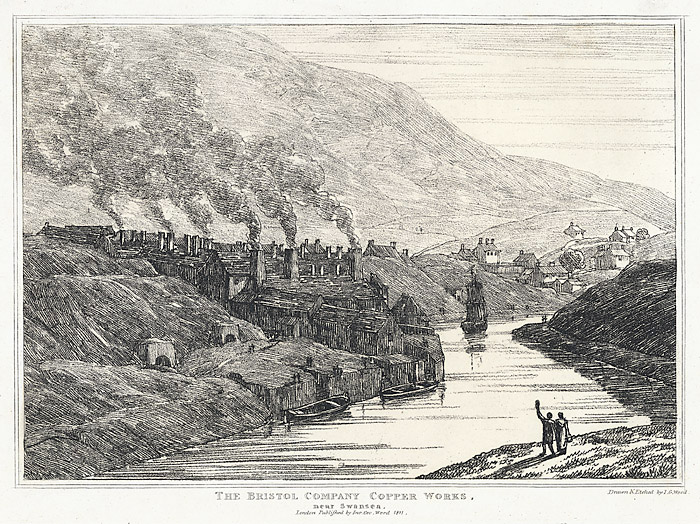 However moving into the 20th century this Copperopolis started to decline. The resources started to dwindle and Swansea faced increasing competition fromforeign rivals. As the industry stagnated, so did the prosperity of the area, leaving behind a declining town and landscape scarred by the heavy industry of its past.

By the 1960s, attempts began to clean the land and make it usable again. The land around the docks was sold to the council and gradually they transformed South Dock into the modern marina that you see now. The boats bobbing on the water would once have been vessels heavy with cargo, but today are now purely coming and going for leisure and tourism. Looking around at this makes it hard to imagine this used to be bustling with copper laden ships.

Meridian Tower itself is a modern landmark designed to symbolise a move from the industrial past of this area to a new booming economy based on leisure and business. The mighty tower is visible across all of Swansea Bay - a symbol of the city’s new image as a modern Welsh city.

There are now plans for a tidal lagoon to be created to generate sustainable energy, and for continued development of the other docks in the area, continuing to boost the post-industrial economy of Swansea.

But do you feel the heritage of this place has been hidden beyond view? Do the developments to build a better future mean the importance of its copper laden past is lost?

Rising up above the small white boats on the water, the tall white Meridian Tower stands imposingly over the marina. The noise of seagulls flying overhead is a reminder of your proximity to the coast and the breeze carries a salty air.

At present it is an area of leisure and peace, although subtle reminders of a more industrial history remain.

What secrets does Swansea's glossy marina hold of a booming metallic past? Click to reveal the answer

Stories from the sea

Explore how Liverpool became the cornerstone of Britain’s international development