Why is Nant yr Arian one of Britain’s most successful conservation success stories?

Bwlch Nant yr Arian’s panoramic views towards the coastline of Cardigan Bay and the expanse of the Cambrian Mountains are dramatic. For as far as you can see through the valleys and around the lake at the heart of your view, there are dense areas of deciduous woodland. It is this unique setting that helps us to answer our question…

Stand and look into the distance. Above the rich green fields and woodlands you may see a few Red Kites circling the skies. You will know you have spotted one of these majestic birds of prey if you can see a forked tail between a mighty wingspan of nearly two metres and hear a distinctive high-pitched ‘whistle’ call. Their characteristic colours make them very attractive; pale grey heads with russet body feathers and distinctive white and black underwing patches. This rural landscape is largely uninhabited, allowing the Red Kites to soar freely, nest and hunt without the disturbance of urban hustle and bustle.

When feeding time approaches up to 150 of these beautiful birds travel from as far as 10 miles away and fly regally above the lake before plunging down to enjoy their daily feast. Once they have claimed their food they will disperse back to their nests, high in the trees that stand here in abundance. Nesting 10-15 meters up, these towering trees provide the prefect habitat. 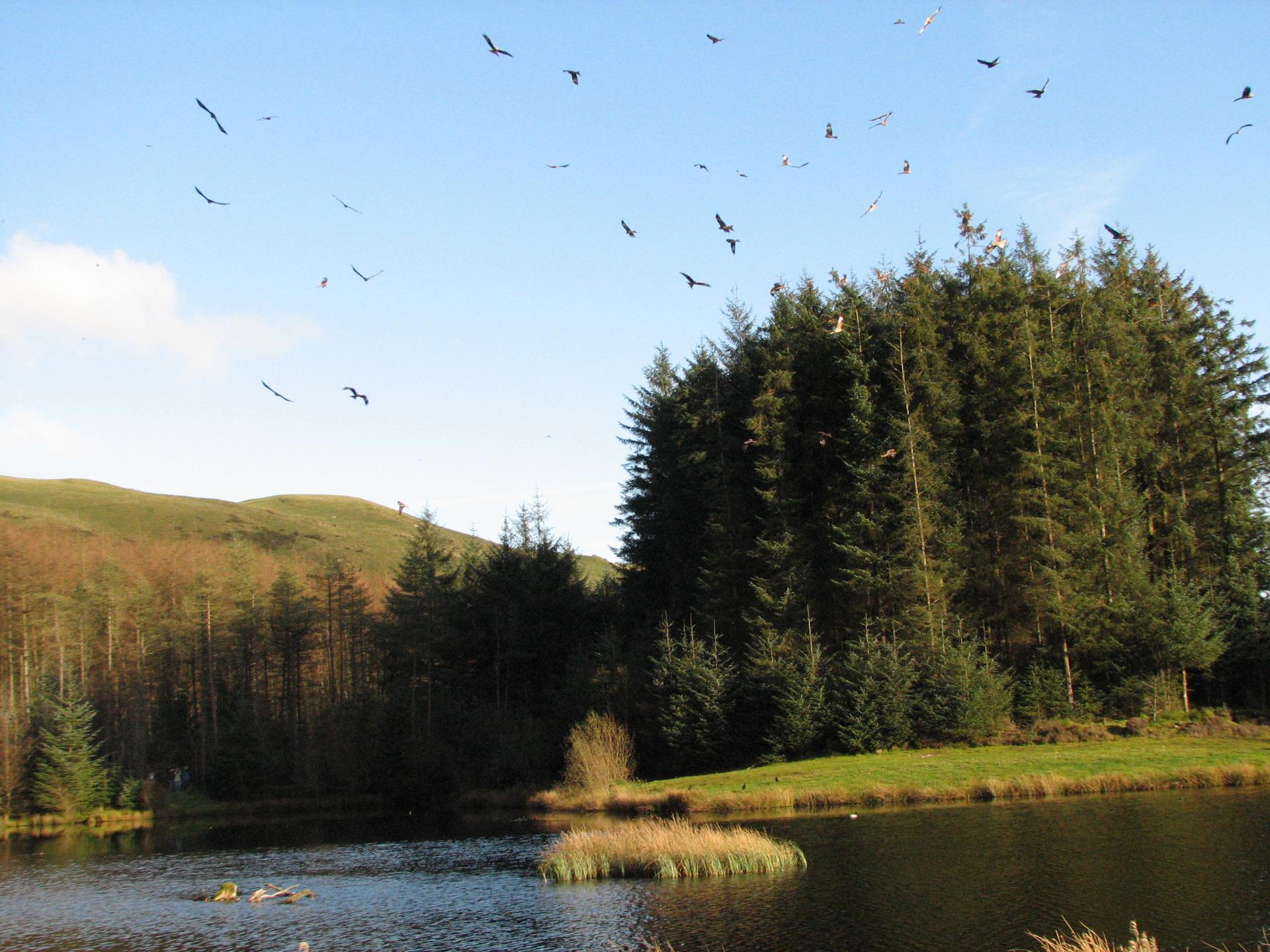 However this scene of soaring birds flocking for food has not always been so. As scavengers, Red Kites were highly valued in the Middle Ages, keeping streets clean from rodents and waste. However attitudes changed by the 16th century, instead thought of as vermin due to their predation of domestic and game birds. With the manufacture of firearms, hunting them became easier and a lack of fear of people made them an easy target.

The Red Kite became rarer and rarer, eventually becoming extinct in England in 1871 and Scotland in 1879. Here in Wales, their mercy to human guns was compounded by the impulsive and changeable Welsh weather.

Thankfully hope remained for Wales as a handful survived in the valleys in which we stand now. It wasn’t until 1903 that a long and tireless battle to reinstate them through an intensive breeding programme began - a collaboration between individuals, landowners and later the RSPB. This now century-long effort was to become one of the world’s longest running species protection schemes! Most Welsh Kites nest within 20km of where they were reared, hence the abundance you can catch sight of in this small areas today.

In 1999 Bwlch Nant yr Arian introduced its Red Kite feeding programme to build on the previous 100 years of breeding success to see numbers gradually creep up.

Standing here today you will be witnessing birds that are part of the now 500-strong breeding pairs in Wales. It is almost 20 years since the introduction of the feeding scheme and more people than ever visit Bwlch Nant yr Arian to enjoy the amazing views and Red Kite spectacle. The long story of these birds of prey progressing from the brink of extinction to now claiming the status of the national bird of Wales is extraordinary. The unique geography of trees and valley lakes, and valiant conservation efforts have ensured its success.

As you walk around the lake and its surroundings before standing to watch the Red Kites, how does it make you feel? Do you believe this place has helped to create a conservation success story?

By taking either the yellow sign-posted footpath (Miners Trail) or the red footpath (Ridgetop Trail) from the carpark you will come across an old mining leat, a watercourse that supplies water to a mill.

This is a legacy of a formerly industrialised landscape where extensive metal mining took place. Folklore within the area claims that fairies living underground called ‘Knockers’, named after the noises heard in mines before they cave-in, made knocking sounds to guide the miners to ore reserves.

As you stand along the edge of the lake at the heart of Bwlch Nant yr Arian you will be surrounded by rolling hills and woodlands, and songs of the many birds that live amongst the trees.

Every afternoon up to 150 red kites gradually fill the sky, circling high above, waiting to swoop down for their food. But this was not always the case - as recently as 20 years ago only a handful of these birds remained in Wales.

Why is Nant yr Arian one of Britain’s most successful conservation success stories? Click to reveal the answer

By the end of the twentieth century, the UK's breeding population of red kites had reduced to just a handful of pairs in South Wales

Stories from the sea

Explore how Liverpool became the cornerstone of Britain’s international development