Why was such a remote location chosen for the priory, and why have people been drawn to this place ever since? 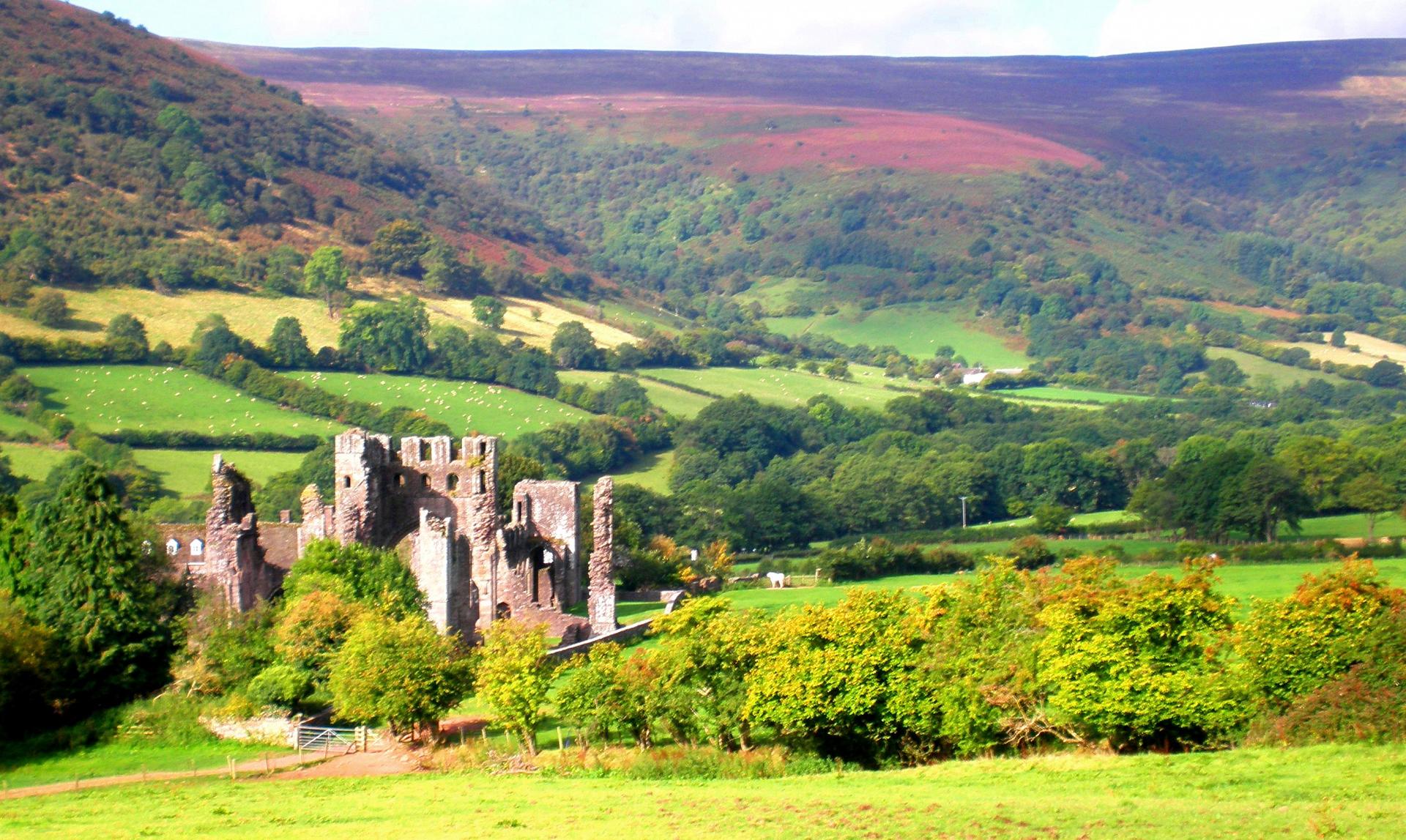 Look at our surroundings and note the steep valley sides: even today, the Vale of Ewyas is pretty secluded. The Black Mountains form a triangle of hilly land between Hay-on-Wye in the north, Abergaveny in the south, and the village of Llangors in the west.

The Vale of Ewyas sits on the eastern edge of this triangle and the key route to it is along the highest road pass in Wales: the Gospel Pass. It is said the road got its name because this was the way St Paul travelled to Wales to preach the gospel. Landscape and religion have long been entwined here. 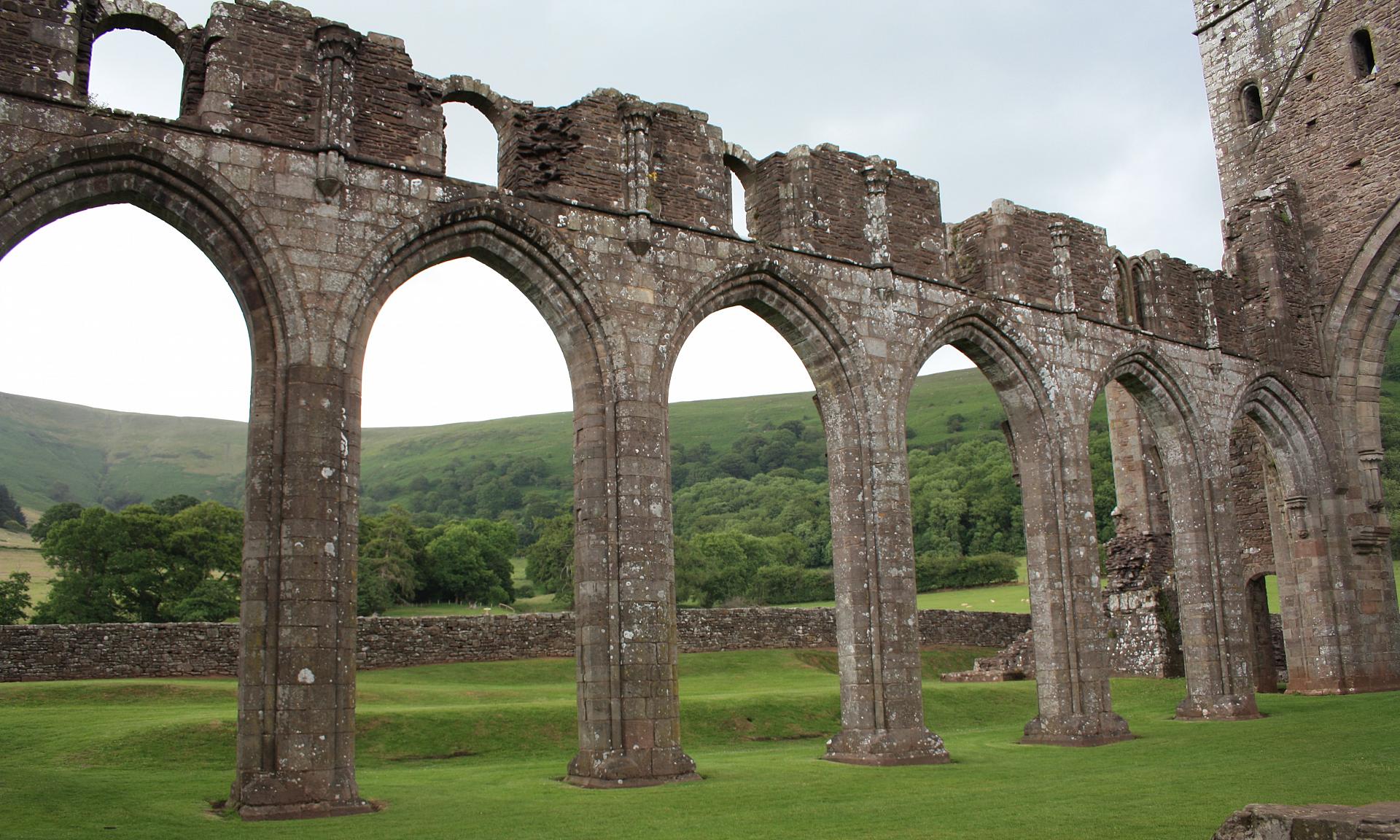 In the early 1100s a Norman nobleman, Walter de Lacy, took shelter from a rainstorm in a ruined chapel he found here. Struck by its remoteness and serenity, he decided to build a church. Others were soon drawn here, finding it an inspirational place for solitary prayer, and by 1118 a group of monks from England had converted it to Llanthony Priory.

Llanthony’s isolation made it an ideal retreat but also placed the Priory in a vulnerable position. The locals resented the English monks occupying Welsh land and they repeatedly attacked the building. The Priory had also received gifts and land from other nobles, so the riches on display were a temptation for thieves. By 1135 the monks were forced to retreat over the border to Gloucester where they founded Llanthony Secunda.

It was not long, however, before the English were drawn back to this striking location. Another member of the de Lacy family funded rebuilding, and by the 13th century the Priory was flourishing again. We can see from the ruins that this must have been a magnificent building.

As a valued English building in medieval Wales the Priory became a target again. In the early 15th century it was attacked by the Welsh prince Owain Glyndwr as part of his campaign to recapture Welsh land from the English. This started a period of decline for the Priory, and it finally closed in 1538 during the Dissolution of the Monasteries by King Henry VIII.

Call of the Wild

During the 18th and 19th centuries the Priory’s remote location captured the imagination again. Britain’s increasingly industrialised towns led to a new interest in picturesque, wild landscapes that offered a retreat from modern life. 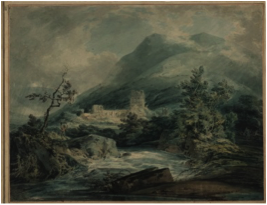 The artist JMW Turner was attracted to Llanthony for this very reason. His 1794 painting - with exaggerated cloud, rain and rushing water – aimed to represent the sublime or awe-inspiring qualities he saw in the landscape, and encouraged other people to see it in this way.

Llanthony has inspired many other creative people since Turner, including the 19th century poet Walter Savage Landor and the 20th century author Bruce Chatwin.

A solid mass of Heaven, mist-infused, ebbs thru the vale,
a wavelet of Immensity, lapping gigantic through Llanthony Valley,
the length of all England, valley upon valley under Heaven’s ocean
tonned with cloud-hang
- Heaven balanced on a grassblade.

This secluded and striking landscape clearly has a powerful effect on some people, moving them to prayer, creativity, poetry and soul-searching. Can you empathise with their search for solitude or do you think the mystique would wear off? Where is your ‘heaven balanced on a grassblade’?

The remoteness and wilderness of Llanthony Priory and the valley continue to move people in the 21st century.

Llanthony was the inspiration for the Big Chill Music Festival, which first took place 20 years ago. The aim was to establish a new type of festival experience where people enjoyed the setting as much as the music. In fact, the music was seen as a way to introduce people to the beautiful site and explore the landscape.

At the other end of the spectrum, each May Llanthony is the location for the Big Black Mountains Challenge – a day of long distance walking and running through the area’s stunning scenery. Here people can appreciate the landscape by moving through it and relish the sense of achievement they feel of ‘conquering’ it at the end.

Meditation, music or marathon: how would you choose to enjoy the tranquillity of this secluded place? 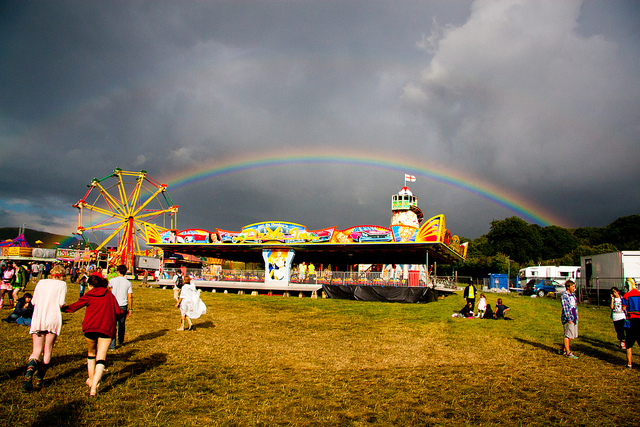 The ruined arches of Llanthony Priory stick out of the ground like the rib cage of a slayed dragon, now forever at rest in the valley bottom.

The Priory lies in one of the remotest areas in Britain, tucked into the Honddu valley between two hilly ridges of the Black Mountains, far from the nearest towns of Abergavenny and Hay. The road to it is just a single track.

Walking among the ruins today it can feel like the mountainsides are the Priory’s walls and the sky it’s ceiling. Stop and lift your gaze to the heavens as the monks might have done. Let a sense of the openness and remoteness of this place wash over you.

Why was such a remote location chosen for the priory, and why have people been drawn to this place ever since? Click to reveal the answer

Caroline Millar and Rory Walsh for advice on the text

"A solid mass of Heaven, mist-infused, ebbs thru the vale
A wavelet of Immensity, lapping gigantic through Llanthony Valley..."
- Allen Ginsberg

Discover how the Lake District inspired artists and writers

Explore the ruins of an Oxfordshire manor house

Discover a serene Welsh lake with many secrets