Why was this farming country deliberately flooded to create a new lake?

The vast boggy floodplain created by the Afon (river) Prysor as it meandered along the foot of the Rhinogydd mountain range, acted like a sponge capturing gallons of water from the surrounding hills which then seeped away northwards into the Vale of Ffestiniog. This water was a valuable source of energy that could drive a hydro-electric power station at Maentwrog in the next valley to the north.

Building a reservoir meant that, by holding back the water and then releasing it down the steep incline of Ceunant Cynfal in one go, power could be harnessed to drive an electricity generator. In 1925 Brynhir, Llwynderw and eight other farms disappeared from view, engulfed by the waters of Afon Prysor. Just three years later the Maentwrog power station opened in the Vale of Ffestiniog. Today it produces enough power for 12,000 homes.

So this quiet rural backwater had taken a step towards becoming, in a sense, an industrial landscape but that was not the end of the story. A bigger development was on the horizon to help satiate our hunger for power, and water was again needed in massive quantities. Some 40 years later in 1965 the equivalent of 64 Olympic swimming pools’ worth of lake water an hour were being used to cool the reactors of the new nuclear power station at the northern end of Llyn Trawsfynydd. At its height, Trawsfynydd generated enough electricity to power a city the size of Manchester.

Times change and the need to modernise along with changes in public opinion led to its closure in 1991 and the long process of decommissioning began. Wind forward 25 years and Trawsfynydd is facing an exciting post-industrial future. 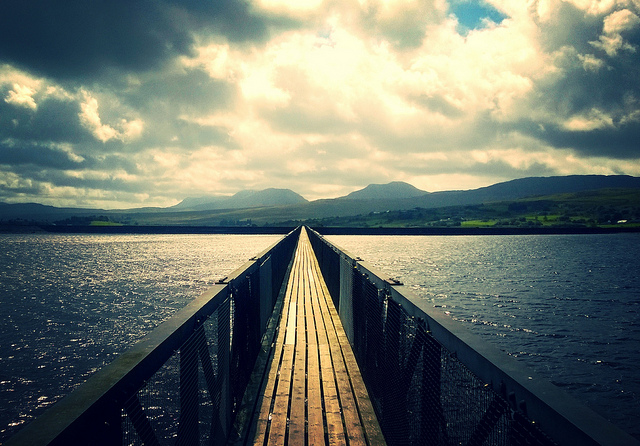 Today this drowned valley is making the most of its main assets – the lake and deep cultural roots (or ‘rich heritage’)- and aiming to attract visitors to its café fishery and many heritage sites. A cycle path and walking route hugs the shores of the lake from which the surrounding hills can be viewed and the name Trawsfynydd, which means ‘amid mountains’ can be truly appreciated!

What a deserving place for a memorial to the fallen of the two World Wars. This testament to the 33 local boys who didn’t return from Flanders is a small tribute compared with the devastation wrought by the loss, on this small close-knit rural community. One of these was the poet Ellis Evans who left his sheep farm to fight at the front. Along with 250,000 other British soldiers, he fell at the battle for Passchendaele in 1917.

Six weeks later Ellis (who adopted the bardic name Hedd Wyn meaning ‘blessed peace’) was posthumously awarded the bard’s chair at the National Eisteddfod at Birkenhead. The chair itself was draped in black during the ceremony, and has since been known as the Y Gadair Ddu (The Black Chair). Whilst Hedd Wyn (Ellis) is the most famous, he is symbolic of all the lads who left their own empty chairs at home and fewer hands to tend the land.

The old harps which once rang

The cry of the lads fills the wind

As their blood mingles with the rain.

A lake for all reasons

Stretched out in front of you is Llyn (lake) Trawsfynydd. At five miles long it is Wales’ third-largest lake, but unlike many lakes in Snowdonia, it is far from natural.

Out of sight under the gently rippling water lie fields, stone walls and farmhouses. If the lake were ever drained a lost world would emerge!

Indeed the profusion of wildfowl, fish and freshwater insects which abound here has replaced the plough, scythe and sheepfold, which once occupied this broad valley floor.

Why was this farming country deliberately flooded to create a new lake? Click to reveal the answer

Siân Shakespear for writing the viewpoint. Siân lives on the edge of Snowdonia and ekes a living by revealing what is hidden about places via stories in Welsh and English, frequently garnered from local people - www.sianshakespear.co.uk

Discover why Harlech's water gate is a mile from the sea

The queen of Welsh resorts

Discover a serene Welsh lake with many secrets