Why has Hay-on-Wye banned e-books?

Hay-on-Wye is well known as a 'book town', which in its heyday boasted over 30 independent bookshops. Things are becoming more challenging for booksellers today however; their businesses are under threat, with consequences for the future of the town as a whole.

Large online retailers can operate more cheaply than small bookshops. Bookshop owners pay taxes and overheads for their premises, while international online retailers can avoid certain taxes and rent cheaper out-of-town warehouses. The issue has been underlined by the introduction of e-books, which mean people can buy books anytime, anywhere, without going into an actual bookshop.

Between 2010 and 2013, 5 of Hay-on-Wye’s bookshops closed down. As a result some booksellers and residents decided to ban e-books and e-readers in protest. Derek Addyman, of Addyman's Books, led the charge; stringing up banners and making national headlines. Besides protecting their livelihoods the move draws attention to the town’s special character. Both would be lost if the books and bookshops were not here. 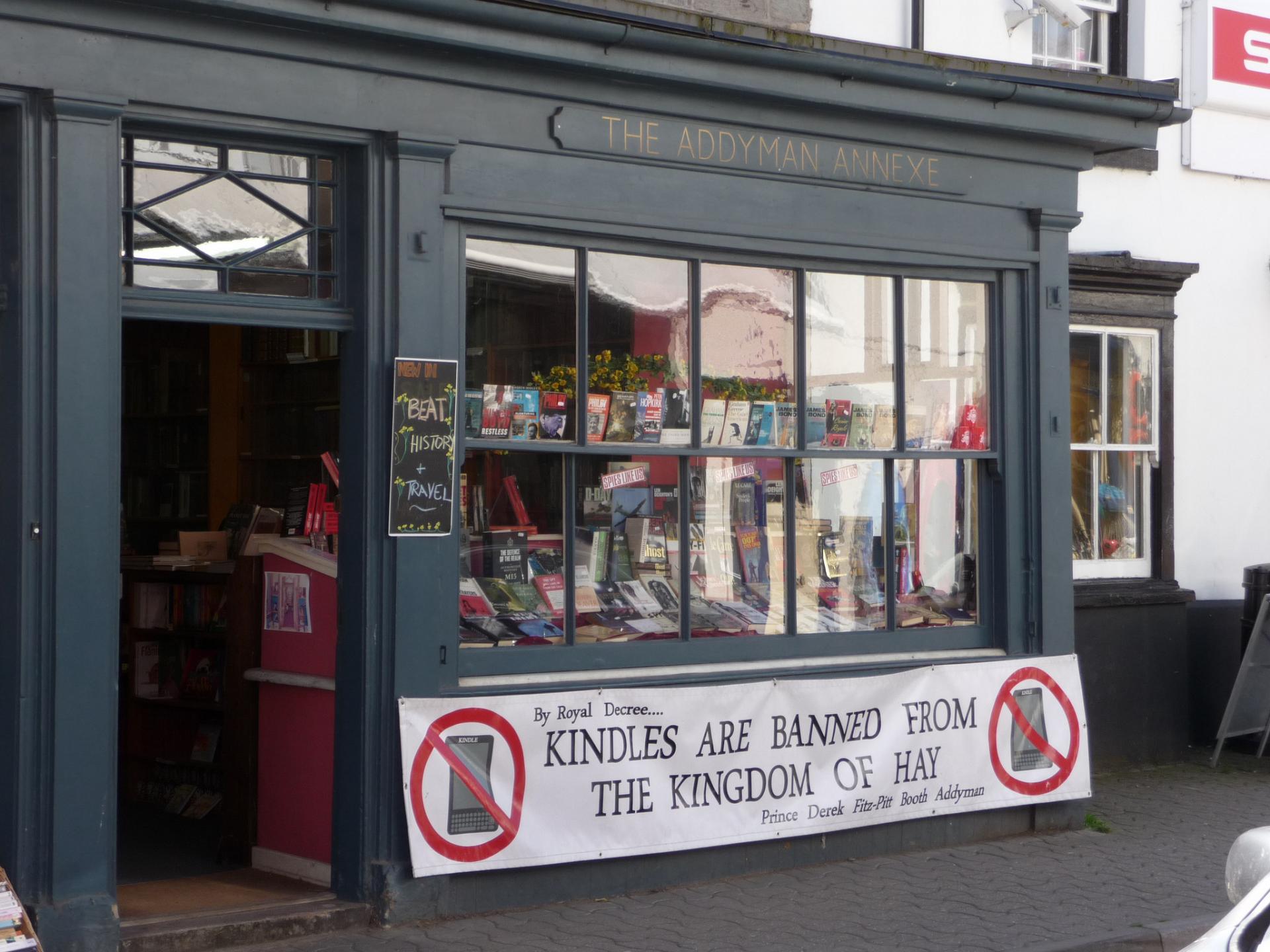 The Kingdom of Hay

It all began with the rather attractive burgundy and cream panelled shop we are standing in front of now – Richard Booth’s Books opened in 1961 and quickly became Europe’s largest second hand bookshop.

Before this, Hay-on-Wye had been an unassuming small town, where most local people worked in agriculture or tourism, providing services for visitors’ walking and kayaking holidays. Richard Booth realised the town could carve out a unique position for itself as a ‘book town’ to attract more visitors and business. On 1 April 1977 he declared Hay-on-Wye was an independent kingdom, ‘The Kingdom of Books’, and nominated himself as the king!

Booth’s entrepreneurial move attracted visitors and more bookshops opened up. Over the next couple of decades the town became a mecca for booklovers. Hay-on-Wye rebranded and regenerated itself from a sleepy border town to the book capital of the UK. It now hosts Britain’s foremost book festival (established 1988), with international speakers and accommodation booked out months in advance. It is amazing to see how the perception of a place can be so important to its fortunes.

Technology has transformed our shopping and reading habits, with many benefits for people lacking time or mobility. However, as we have seen, it makes it harder for small bookshops to survive. If the bookshops close down, the character of the town will change again, and so may its fortunes. While a grand publicity stunt first launched Hay as a book town, can publicity stunts like the banning of e-books save it today? Can places ever survive unchanged?

Just a little further along Lion Street you will find a shop front with a mysterious dark figure and a sinister looking hound painted on it. This is ‘Murder and Mayhem’ a bookshop dedicated to crime, detective and horror fiction. Specialising and offering unusual experiences for visitors (such as a themed evenings) are both ways the booksellers of Hay are trying to compete with e-books and online retailers. See if you can spot other specialist stores around the town.

Similar tactics have been employed by other towns across Britain to build themselves a reputation and attract visitors and spending. Drawing on a history of artistic residents and visitors (including Henry Moore and Barbara Hepworth), St Ives, for example, sells itself as an art town. Numerous galleries, art shops and artists’ retreats entice visitors and emphasise the specialist nature of the place. 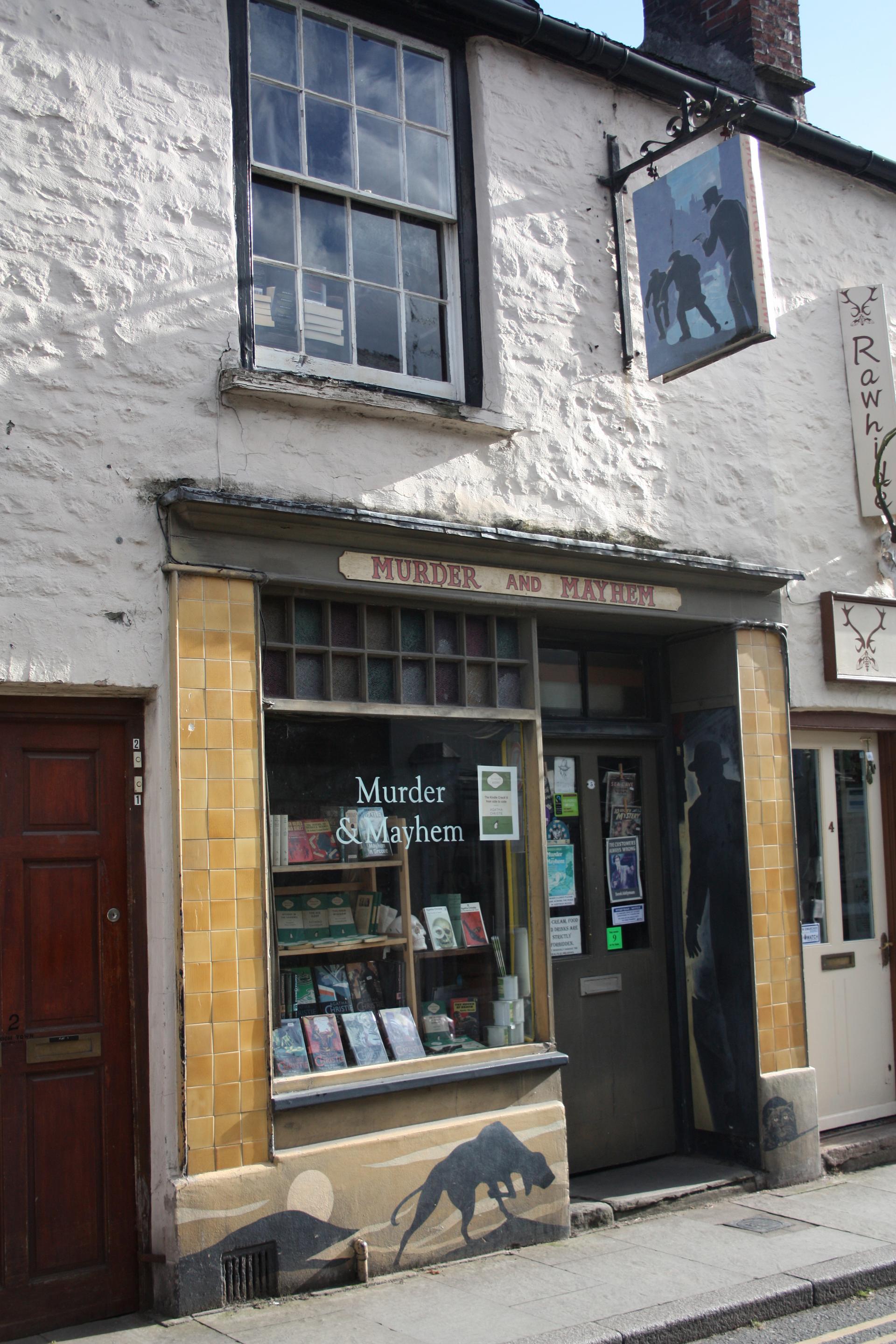 Walking through the streets of this quaint Welsh town you won’t have failed to notice how well-kept they are, with neat signs, fresh paintwork on the shop fronts and scrupulously clean pavements. Hay-on-Wye looks like a most welcoming place.

So it may come as a surprise to learn that the residents have taken the drastic step of banning e-books!

Why has Hay-on-Wye banned e-books? Click to reveal the answer

Caroline Millar and Rory Walsh for suggestions and edits

"Hay-on-Wye is the Woodstock of the mind" - Bill Clinton

Discover a 'magical' lake in the Brecon Beacons

Why was Llanthony Priory built in such a remote location?