But why is Harlech’s water gate stranded on dry land and nearly a mile from the sea?

From our vantage point beside the castle it is clear we are on the edge of a cliff. Face the sea and note how the ground drops away quickly in front of you to flat ground below, which extends out to the sand dunes and the beach.

If you look to your right (north) and a little behind you towards the hills, you should be able to trace the line of the cliffs through the landscape for several miles. If you had stood here 700 years ago the sea would have lapped against this cliff edge and the land beyond would not have existed.

So what has happened?

From around the 1300s particles of rock and sand carried by the waves began to build up along the edge of the cliffs. The wind mostly blows into Harlech from the south-west and so the waves gradually washed the particles northwards up the coast. 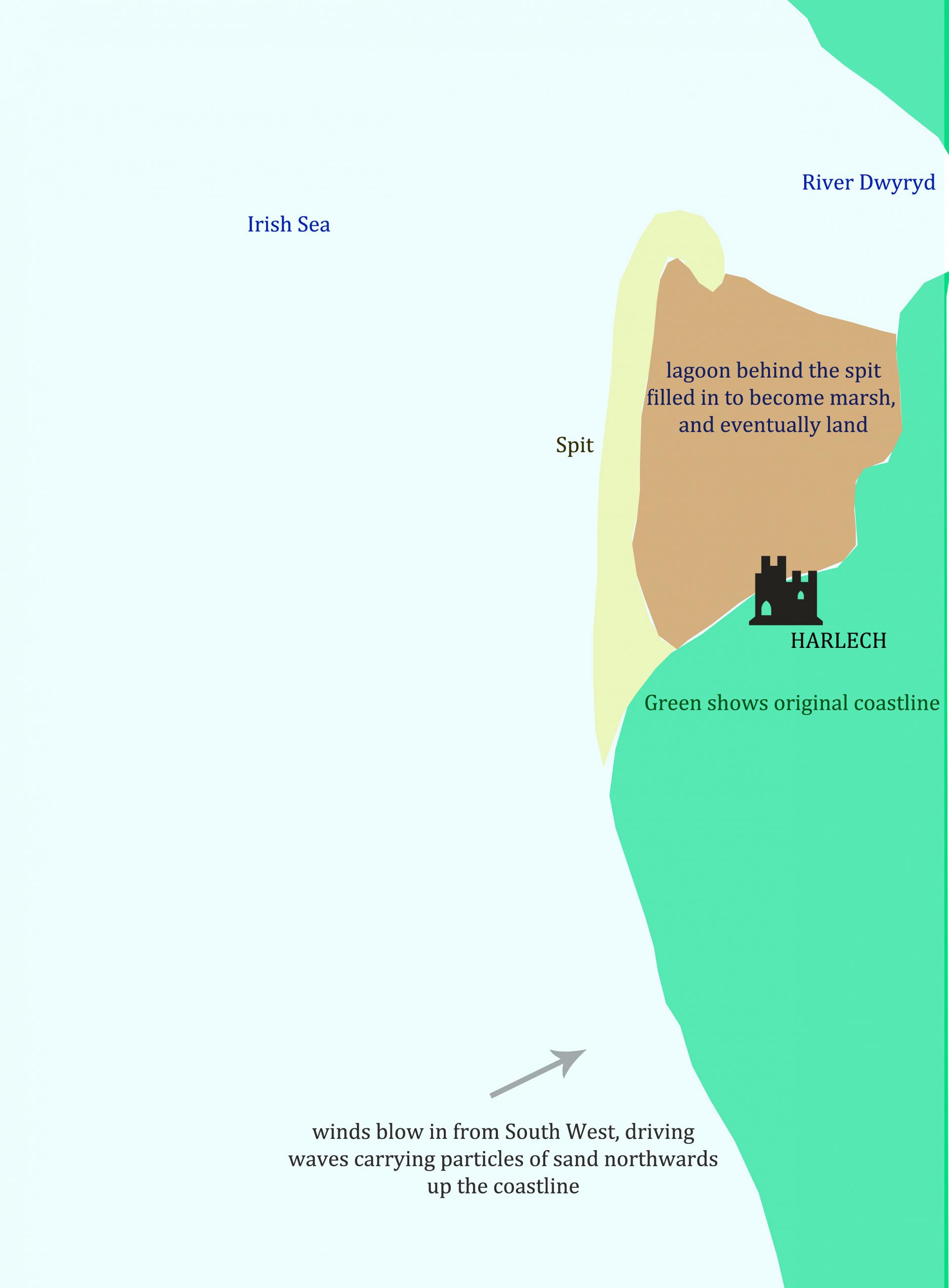 At Harlech the coastline used to simply bend inland where the River Dwyryd met the sea. However, as the particles were washed up the coast they began to collect on the bend. Over time so much material collected here it created a finger of land, which projected out into the estuary.

The stronger currents in the middle of the river prevented the finger from completely crossing the estuary, and winds from the north-west smoothed the end of the finger into a curve. This feature is called a spit.

The body of water between the spit and the old coastline was protected from the wind and waves and so it formed a calm lagoon. Over time sand and mud from the river collected up here creating a new area of marshy land. This is the land that now separates Harlech castle and its cliffs from the sea.

So when the castle was built, back in 1283, the water gate at the base of the cliffs provided perfect access to the sea. It is only over time, and because of the growth of the spit, that sand and marshes have accumulated here, meaning the coastline today is nearly a mile away.

King Edward I built a castle at Harlech for two reasons. Firstly the high ground gave it good views over its surroundings, meaning it was easy to defend. Secondly, it was right on the seafront so boats could bring supplies directly into the castle without having to cross the land.

This feature came in particularly handy between 1294 and 1295 when the castle came under siege from the Welsh who were revolting against English rule. The English in the castle survived the siege because they could still bring food in by boat via the water gate and up a guarded stair.

It is fortunate the castle does not have to withstand a siege today as the land that has subsequently built up around it means it has lost this advantage. 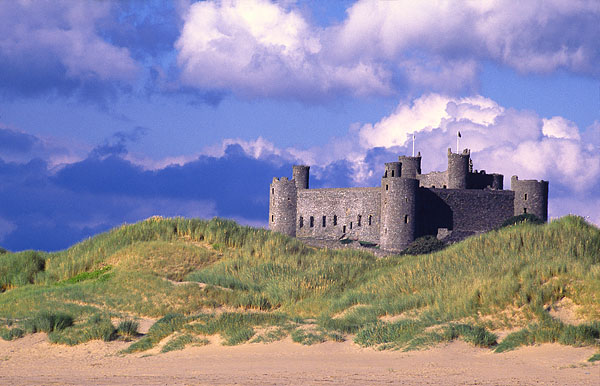 If you were to walk downhill to the car park below the castle on Hwylfar Nant you would find the water gate of Harlech castle.

A water gate provides a castle with direct access to the sea so that goods can be brought in directly by boat.

But why is Harlech’s water gate stranded on dry land and nearly a mile from the sea? Click to reveal the answer

Men of Harlech, on to glory!
See, your banner famed in story
Waves these burning words before ye
"Britain scorns to yield!"