Why does Old Harry no longer reach across 14 miles of sea?

If you could zoom in on the Isle of Wight, you would notice it has its own set of chalky pillars reaching into the sea. These are in fact Old Harry Rocks’ cousins - The Needles. 10,000 years ago both Harry and The Needles were buried deep in a continuous ridge of chalk hills which joined the ‘Isle’ of Purbeck on which we now stand, with the ‘Isle’ of Wight. 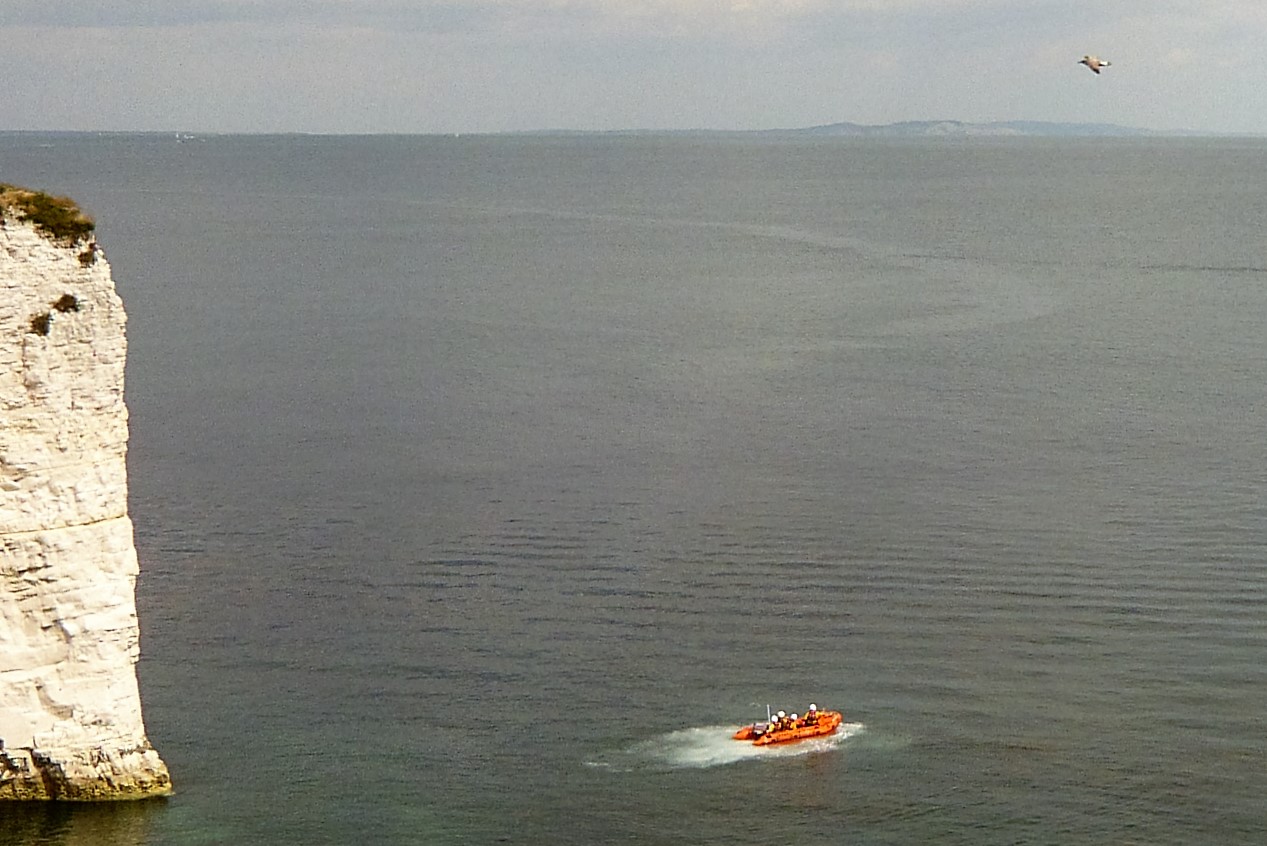 Not Isle’s at all, but one piece of land!

The English Channel was a lot narrower then too, with the coastline probably another five to ten miles further south towards France.

Studland and Poole Bays were mostly dry land, not the watery landscape we see around us today. They were probably covered in heathland and woods, with the mighty River Solent weaving its way through the vegetation to reach the Isle of Wight and beyond.

People lived in this ancient landscape. On the lowlands were villages, probably using the Solent River banks to access water for agriculture, fishing and to create trade routes with other local communities and continental Europe.

Well, it was climate change, but the natural sort!

While the Earth was in the grip of an Ice Age, so much water was locked up in the ice sheets and glaciers that sea level was much lower than it is today. But as the planet warmed up, melting ice released huge quantities of water. Rivers swelled and the sea level rose.

Vast areas of low-lying coastal land were flooded. The mouth of the River Solent, way beyond the Isle of Wight, would have been inundated by the rising sea. This surge in water spread steadily westwards until the low-lying valley in front of Poole and Bournemouth was flooded.

As well as simply covering land, the rising waters of the English Channel actually wore away the southern shores of Purbeck, Wight and eventually the chalk ridge that connected them. As the sea broke through and joined up with the waters of the flooded Solent, the Isles of Purbeck and Wight were parted forever.

The ancestors of Old Harry Rocks and the Needles would have stood like sentinels either side of the new gap in the chalk ridge, and as they were worn away, new ‘Needles’ and ‘Old Harrys’ would have been exposed, each generation leaving a larger gap until the 14 mile one that divides them today.

So natural climate change was responsible for parting Harry from his Needles.

But we now expect this view to change even further. With rapid current climate changes, for which humans are now partly to blame, we expect sea levels to rise again. The same processes will come into play, with seas covering and eroding the coastline.

So who knows where Old Harry may end in the decades to come, or how many generations will follow him as the chalk ridge continues to bid its farewell to its counterpart across the waves.

How were Old Harry’s ancestors formed?

A headland’s cliffs are exposed to the power of the sea, especially at the bottom of the cliffs where the sea will wear away softer and weaker bits of rock to form caves. If a cave from one side reaches a cave from the other side, the connecting wall will collapse and instead of two caves there is an arch.

Erosion continues until the roof of the arch also collapses, usually leaving an isolated free-standing pillar of rock, or a ‘stack’. Old Harry Rocks and The Needles are stacks. If you look closely (but carefully!) from where you stand now you should be able to see a new arch forming in one of these stacks. 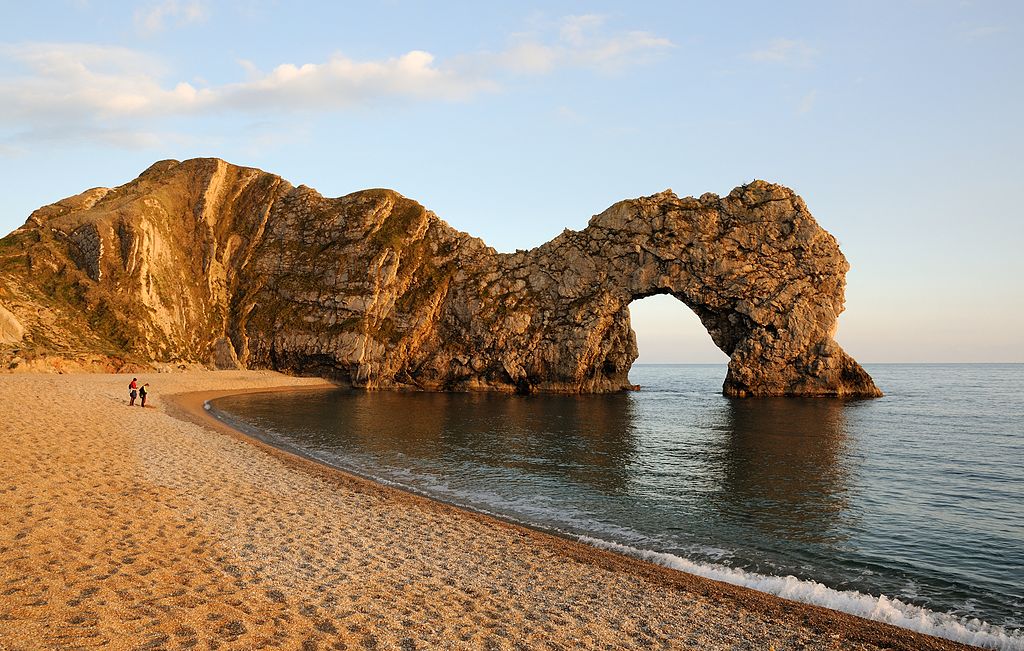 Eventually the wearing away of the base of the stack leads to it toppling over, leaving a ‘stump’, which, in time gets worn down to sea level or below. You can see all these features from this viewpoint, but a bigger famous arch is just a few miles away at Durdle Door, near Lulworth.

The global changes which led to Old Harry’s 10,000 years ago ancestors must have had similar effects all over the planet.

Melting ice and rising sea levels eroded coasts, flooded river valleys and low-lying plains, and displaced many ancient communities of people. While the rising waters were re-shaping the Dorset and Hampshire coastlines, they were also pouring through the Straits of Gibraltar into the Mediterranean, and in turn through the Dardanelles and Bosphorus waterways to create, or at least greatly enlarge the Black Sea.

And this might just be where the story of Noah’s Flood has its origin!

Of various theories which have been put forward to explain Noah’s Flood – which appears in many cultures and religions – this is one, if, as is probable, the story has its origins in real events and is not purely an allegorical tale.

Stood on Handfast Point - the last piece of mainland before the grassy-topped nuggets of Old Harry Rocks step out in the ocean beyond - you tower above the waves below.

From this dramatic spot you can see the Isle of Wight, with its chalk cliffs peeping over the horizon. Gaze left along the mainland and you'll see Bournemouth,  Poole harbour and Studland’s sandy bay.

From this heady vantage point the power of the sea is inescapable. But this view hasn’t always been so watery...

Why does Old Harry no longer reach across 14 miles of sea? Click to reveal the answer

David Kemp for creating this viewpoint

'Old Harry' was a nickname for the devil and legends say he once slept on the rocks - hence their name. Another story goes that the rocks are named after Harry Paye, a local pirate who used the rocks to hide his ship from customs officers.

A favourite haunt of Tennyson and a haven for smugglers

The town that never was

How did a town disappear from Dorset's Isle of Purbeck?

Where Keats wrote poetry, Rupert Brooke lost his love, and Bertrand Russell caused an uproar skinny dipping with his lovers