Where did Dartmoor’s strange tors come from?

Before taking in the sweeping Dartmoor landscape look closely at the distinctive outcrop of grey rocks ahead known as Hound Tor. What does it look like to you?

Now see how many other tors you can you spot from this viewpoint. Do they all seem to be on the highest points in the landscape?

From a distance these rocky outcrops might look like they might have been deliberately carved out by humans and early theories even supported the idea of man-made monuments, but tors are formed of a naturally occurring rock called granite. 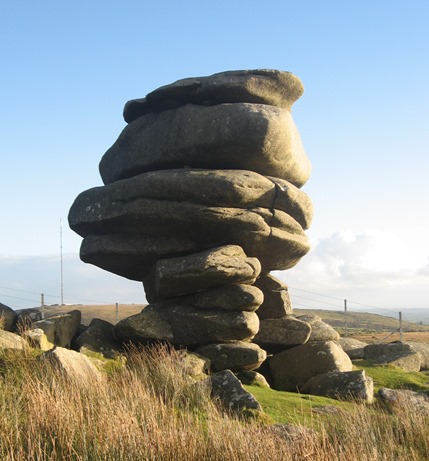 Now look below the tors, first you’ll see boulder-strewn grassy slopes then lower down woodland and then cultivated fields.  Humans too have had their hand in this landscape since at least the Bronze Age.

So how has the distinctive Dartmoor landscape been shaped by both natural and human forces?

To find out we need to go back in time some 280 million years ago to when huge tectonic forces in the Earth created a great mountain chain. At the same time, deep in the Earth’s crust, molten magma forced its way up into the base of the mountain range, solidifying as hard granite several kilometres below the surface.

All that is left of this ancient mountain range is its granite core, which over tens of millions of years has been eroded by wind, rain and ice.

The tors get their blocky appearance as a result of a process known as freeze-thaw action. As rain water seeped into the cracks in the granite it repeatedly froze and thawed. This put huge pressure on the rock, enlarging the cracks, causing sections to crumble away and leaving behind these dramatic stacks of rock.

The lost village of Hundatora

At the end of the last Ice Age, Britain’s climate improved, soil and vegetation developed and slowly humans began to move into the area. Firstly Bronze Age (approx. 2000 years ago) people who left a mysterious stone circle in the valley below whilst on the far side of Greator Rocks in front of you there is evidence of Bronze Age farmer’s hut circles.  However the most interesting human occupation lies below you at the foot of those rocks.

Walk slightly to the left and take the wide downhill footpath to the valley floor stop when you can see over a well cut green grassy area with walls and hummocks. 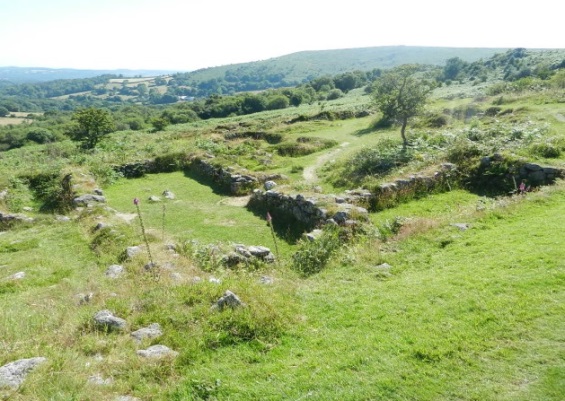 This grassy area is the site of the lost village of ‘Hundatora’ (from which we get Hound Tor). It was recorded in the Domesday Book of 1086 and appears to have been occupied when the climate improved and people moved up onto the high moor to farm what must have been tough, untameable land.

If you look closely you can make out the layout of the four longhouses which were built to house people at one end and animals at the other. There were smaller barns and gardens as well as fields surrounding the medieval village which was deserted by the fifteenth century.

On the left you can see a longhouse with two entrances; one for people and the other for animals. You can also see the remains of the central hearth. Instead of chimneys, the smoke was left to disperse through the thatch.

Why not walk around the site, soak up the atmosphere and try to imagine what life might have been like here, farming this tough land, exposed to all weathers and living alongside your animals!

Dartmoor and its famous tors have long held sway over the public imagination. The strange rocky outcrops can appear sinister in bad weather and their eerie silhouettes have become the focus of myth and legend.

Hound Tor abounds in stories of ghost dogs and a roaming great black hound. It is said to have inspired Arthur Conan Doyle’s Sherlock Holmes story The Hound of the Baskervilles.

But putting the local legends and tall stories to one side, just how did these peculiar features get here?

Where did Dartmoor’s strange tors come from? Click to reveal the answer

The tors are like pimples on the surface of Dartmoor