How did the scenic Camel Estuary become a watery grave? 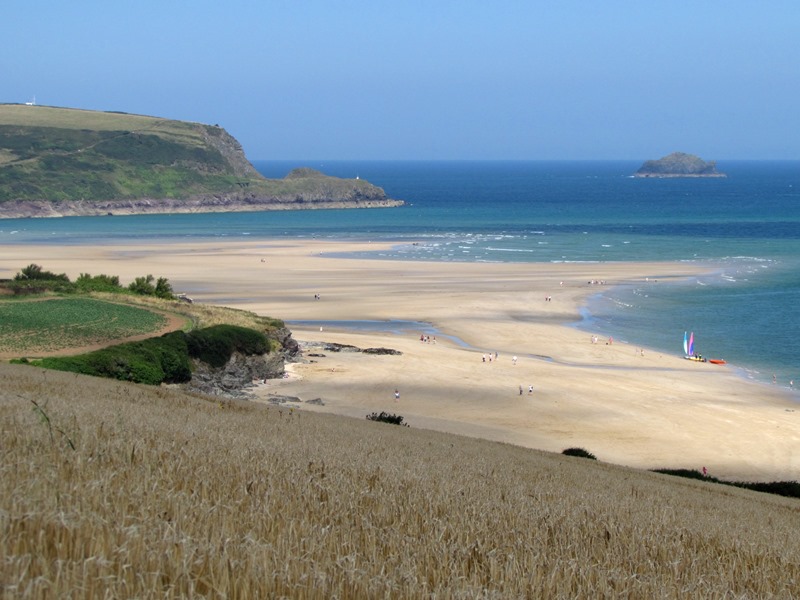 Cornwall’s coast is spectacular – and not just for its natural beauty. Cornwall directly faces the Atlantic Ocean and the coastline is often pummelled by fierce storms.

Sailing around the county can be treacherous, reflected in a traditional rhyme: “From Padstow Point to Lundy Light / Is a watery grave by day and night”

The broad mouth of the River Camel is one of the few places on Cornwall’s north coast that provides inland shelter for boats. By the twelfth century, its location and the shortage of other harbours nearby meant it thronged with seafaring traffic, from local fishing boats to visiting merchants’ ships. 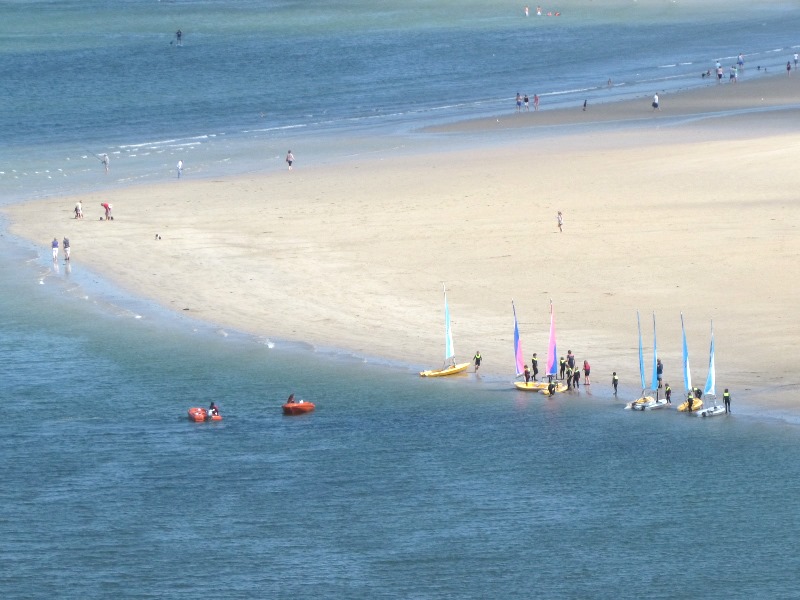 Yet the people who used the estuary to make a living also faced dicing with death. From the sixteenth century the river had a terrifying reputation.

The culprit was the Doom Bar, an expanse of sand that reduces the river to a narrow trickle at low tide. From up here it appears as a yellow sheet spreading from the base of Stepper Point, the headland on the left of the horizon.

The Doom Bar is one of three ‘sandbars’ in the Camel Estuary. Sandbars are formed by tides, storms and ‘longshore drift’ - a process where waves carry material along the coast. All of these activities raise sand and shingle from the sea bed. This material is washed into the shallower water of the Camel Estuary where over time it swells into ridges or ‘bars’.

By filling up the River Camel, sandbars reduced maritime trade and Padstow’s port went into decline. But these weren’t the only costs.

For some of the day the Doom Bar lies hidden under shallow water. At night it’s virtually invisible. Before engines developed, boats were sail-powered and relied upon the wind. In the Camel Estuary, the natural sea breeze dies out past Stepper Point. Drifting boats, especially during north-westerly Atlantic gales, were helplessly pushed towards the Doom Bar. As their anchors couldn’t grasp the sand, many were beached and wrecked.

Today the Doom Bar shares its name with a brand of craft ale, brewed at Rock on the opposite side of the river. But for centuries its name inspired fear not beer.

According to tradition, the Doom Bar formed over a few days after a violent storm. Cornish legends claim the cause was the avenging 'Mermaid of Padstow', who lived in the River Camel and enjoyed watching the passing boats. One day a local man visited the estuary with a new gun. Looking for something to test it on, he met the mermaid and shot her.

Accounts vary whether he did it by accident or deliberately, but all versions agree upon the mermaid's dying act. She cursed Padstow so that the town’s harbour shrank and the river filled with sand.

Incidentally, the River Camel’s name has nothing to do with humped animals. Instead it comes from Cornish for ‘crooked one’ and refers to the river’s twisting course.

The Doom Bar’s death toll declined from the nineteenth century. While engines superseded sails, railways reduced Padstow’s maritime traffic. The motor boats that visit today also benefit from river dredging. From the 1830s to 1990, around 10 million tons of sediment was extracted from the Camel.

Besides improving navigation, dredging had another result - the Doom Bar moved. Take a look at these two charts of the estuary. 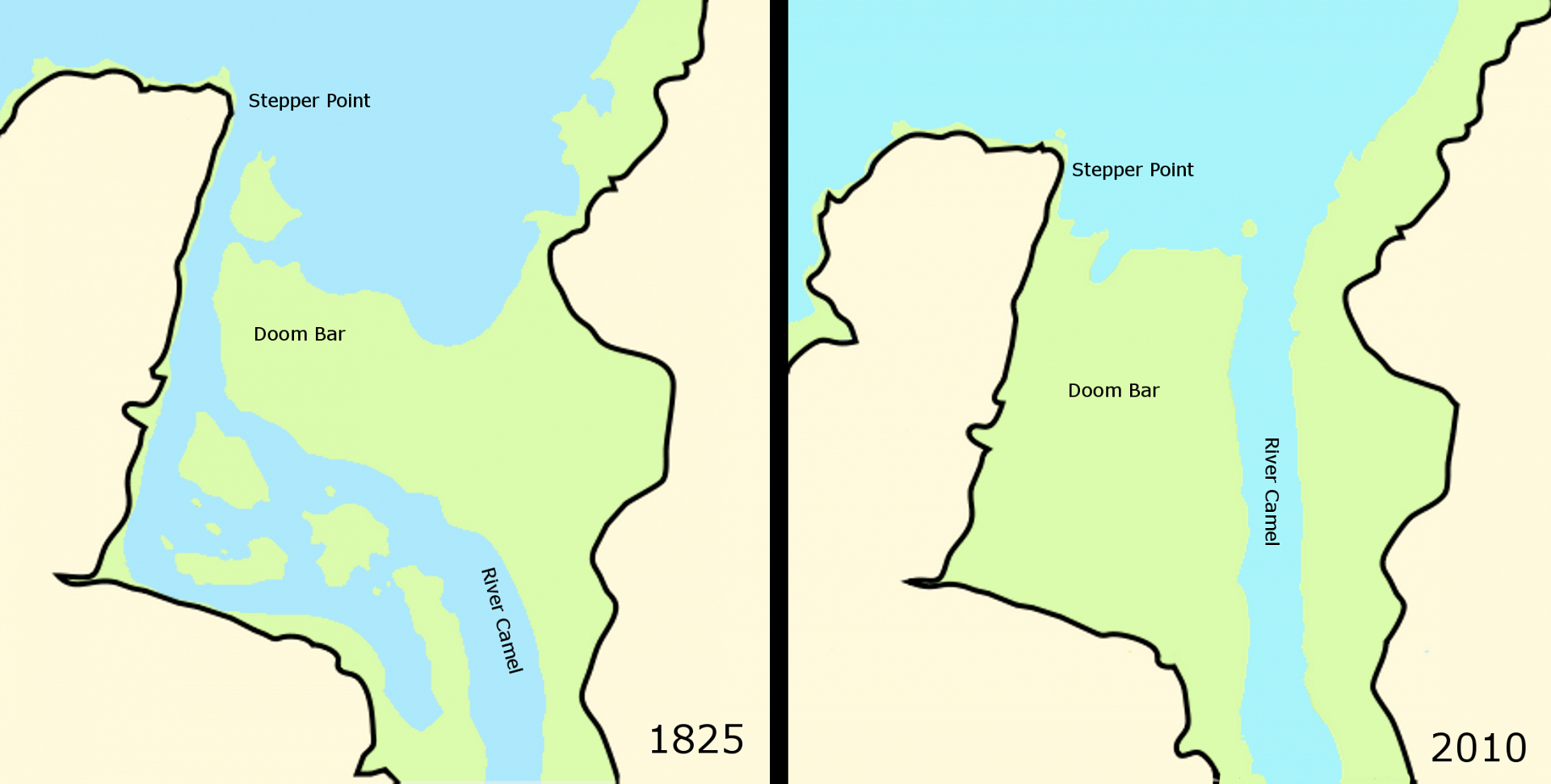 When the Doom Bar was first mapped in the 1820s it spread from the east bank of the river. Boats passed it by looping towards Stepper Point. But sandbars evolve with the tides that form them. Centuries of tidal action and dredging mean the Doom Bar has shifted across the estuary, creating the different channel in use today.

This magnificent view of the Camel Estuary can be idyllic. While tiny figures of people explore the cliffs and relax on the beaches, craft from surfboards to luxury yachts waft across the water.

Today the nearby town of Padstow is a popular holiday retreat but for centuries it was a working port.

And this view wasn’t always so serene. The Camel Estuary has wrecked hundreds of ships with the loss of countless lives.

How did the scenic Camel Estuary become a watery grave? Click to reveal the answer

Helen Rawling and Caroline Millar for advice and edits

“From Padstow Point to Lundy Light,
Is a watery grave by day and night”
- traditional sailors' rhyme

What secrets lie buried beneath the sand at Widemouth Bay?

What shaped north Cornwall's dramatic coast at the Bedruthan Steps?