Who were Samson’s former residents and why did they disappear?

Two hundred years ago Samson was home to around forty people who lived and worked on the island as farmers and fishermen.

A tiny island at just 0.38km², compared with the smallest currently-inhabited island, Bryher at 1.32km², life was hard and resources were scarce. By the mid-1800s there were just two families remaining: the Webbers and the Woodcocks. All ten residents are reported to have been suffering the effects of malnutrition, surviving on what they could forage locally, predominantly potatoes and limpets.

In 1834 London-born, self-appointed Lord Proprietor of Scilly, Augustus Smith, acquired the lease of the Isles of Scilly from the Duchy of Cornwall. He moved into Tresco Abbey, developed the now-world-renowned Abbey Gardens, and set about reforming the lives of the islanders.

Many of his reforms seem well-intentioned, including building schools on the main islands and a new quay on St Mary’s, but some of his actions were unpopular and unwelcome. In 1855 he removed the families from Samson and rehomed them, turning the island into his private deer park. But even the deer failed to prosper and many escaped, some even attempting to swim to the neighbouring islands!

Left alone, Samson has returned to the peaceful wildness we find today, a haven for wildlife – in particular wildflowers and seabirds – and is looked after by the Isles of Scilly Wildlife Trust. 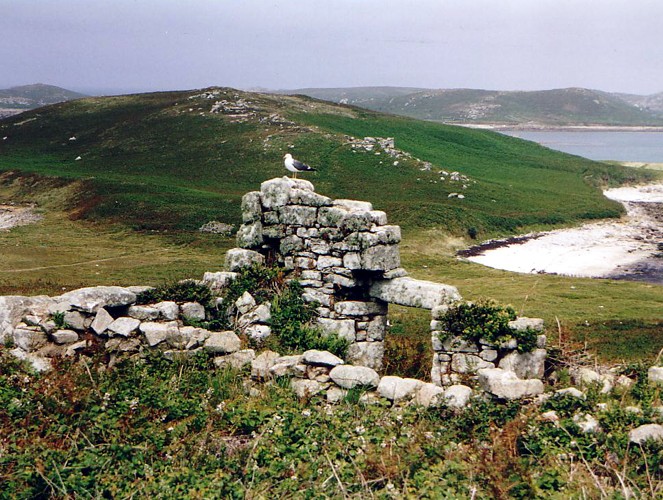 On the open summits of Samson’s twin hills, North and South Hill, are several fascinating Neolithic burial chambers. (In Britain the Neolithic period, or late Stone Age, is estimated to have been around 4,500 to 2,500 years BCE).

Also known as ‘dolmen’ these tombs consist of a single-chamber megalithic tomb, with two or more vertical megaliths on which rests a horizontal capstone. They were most likely used to bury important people, but they may have been used as territorial markers and places of ritual offering. There are over 80 such entrance graves recorded on the Isles of Scilly. 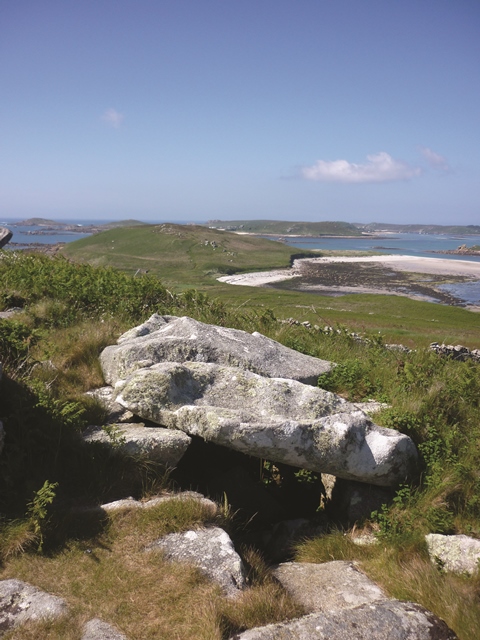 Lying 28 miles off the coast of mainland Cornwall, the Isles of Scilly are a scattered group of around 140 islands, of which 5 are inhabited.

Samson, on the western edge of the main group, is the largest of the uninhabited islands. It takes its name from Saint Samson of Dol, who visited the islands in the sixth century.

Nestled in the narrow strip of land between the twin hills of Samson stand the roofless remains of stone cottages and boathouses. Long walls section off parts of the island and, around the ancient burial sites that top the hills, flints, pottery and other echoes of an intriguing history of human habitation have been unearthed.

But since the mid-nineteenth century no one has lived here; the buildings and former deer park have crumbled into ruins and the island lies swathed in ghostly tales.

Who were Samson’s former residents and why did they disappear? Click to reveal the answer

Jen Benson for researching, writing and photographing this viewpoint

Jen and her husband Sim Benson are writers, adventurers and parents. Their aim is to inspire, inform and make exploring wild and beautiful places achievable and enjoyable for all. View their website for their adventures and books.

Graham Bland for the secondary photograph of Samson accessed via Flickr (CC BY-NC-ND 2.0)

"If you ever do go to the Isles of Scilly, go over to Samson and look around for yourself. The old ruined cottages are still there, a mound of limpet shells outside each one; and you’ll find the well full of water. No one lives there, so you’ll have only the terns and the black rabbits for company. You’ll be quite alone". - Why the Whales Came, Michael Morpurgo

Why does a tall chimney dominate Cape Cornwall?

How have pilgrims made their mark on Orkney?

The sands of time