So why was a railway line built in such a precarious location? Was it an act of folly by the great Victorian engineer?

The mid-19th century was a time of ‘railway mania’ in Britain with 4,300 miles of track being laid between 1845 and 1851 alone! In 1835 the first serious proposal for an Exeter to Plymouth railway line was mooted. The Exeter Corporation suggested a route several miles inland through Chudleigh, roughly following the modern A38. Engineer, Isambard Kingdom Brunel favoured another inland route using tunnels between Teignmouth and Dawlish.

As they looked into these routes however it became apparent that both would involve major engineering works to cross the South Devon hills and to bridge local estuaries. Both plans were therefore rejected as being too expensive.

So Brunel came up with a third option: to run the line down the bank of the Exe Estuary and then along the seafront. Although this was still a challenge, requiring tunnels to be built through the cliffs, it did at least avoid the hilly terrain and bridge building that would have been needed for an inland route. Precarious as they may seem, the seafront and cliff edge were therefore the most attractive choice!

In 1844 an Act of Parliament was passed accepting the ‘sea wall route’ and Brunel started work. But the railway has not been without its problems over the years, and to understand this we need to take a closer look at the red rock below us. 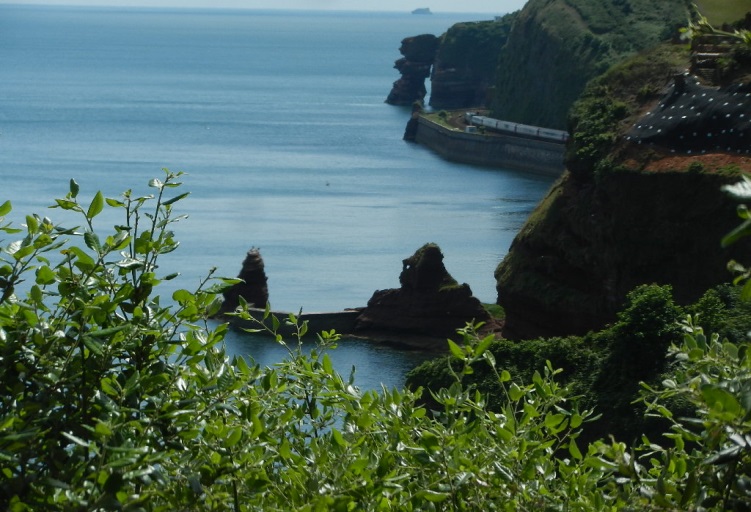 The cliffs here are made of a crumbly rock called ‘breccia’ and date from the Permian Era (299-251 million years ago). Over time, waves, wind and rain batter the cliffs and wear this soft rock away. This can undermine the track or cause rockfalls from above. The railway has clung on, with the seawall providing some protection from the full force of the waves, but the netting above reveals the threat is ever-present.

But to see where the greatest challenge lies we need to follow the footpath around the cliff edge, behind the sign ‘Lea Mount before the Railways came to Dawlish’ 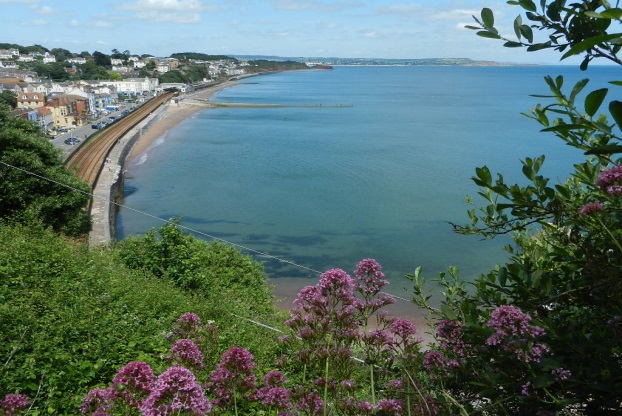 The view from here is strikingly different; instead of the little red cliffs and coves we saw before, the coast is a sweep of orangey-red sands past Dawlish, Exmouth and Orcombe Point. This is due to a change in the rocks: the breccia suddenly gives way here to Dawlish Sands.

These rocks are much softer than the breccia and have weathered and eroded, leaving low straight cliffs and gently sloping beaches. The railway therefore runs over much softer foundations here, and storm waves can more easily breach the track and wash away the sand.

In February 2014 almost the worst storm ever recorded in Britain breached the seawall beyond the station and left the lines suspended over a large hole. As this is the main line in the region it effectively cut off Devon and Cornwall from the rest of the country for two months! By April the line itself was reopened but it took another 18 months to completely restore everything else that was destroyed. 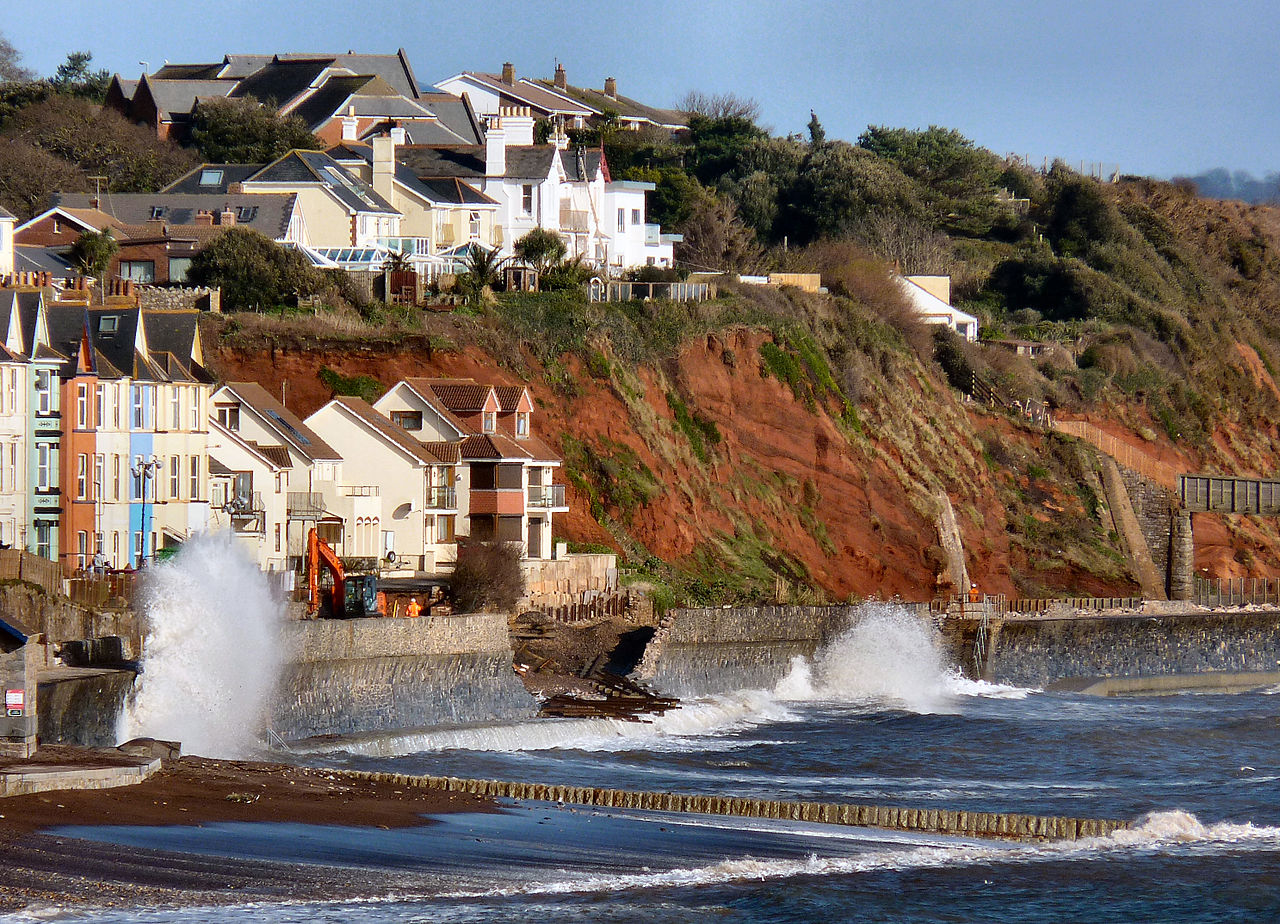 Viewed from this perspective, it may seem foolhardy to have built a railway line right on the seafront. However, due to the challenges of the landscape inland and a limited budget, Brunel had little choice.

Today we are still trying to find an appropriate and affordable alternative. Resolving this issue will only become more pressing as rising sea levels threaten the future of the railway. Some estimate that within 50 years the track could be inundated: is this the end of the line?

From the crown of Lea Mount, just above Dawlish, face the sea and look right towards Teignmouth. Let your eye run over the red, knobbly rocks and be drawn into the secretive little coves that make up this stretch of coastline.

You might expect such a rocky, indented coastline to be left wild and undeveloped, but that is not the case here.

If you look beyond the two sea stacks (the Horse Rocks) to the next headland, you can pick out a seawall; this protects the track of Isambard Kingdom Brunel’s famous coastal railway line. The seawall clings to the side of the cliff, with just a few feet separating the track from the churning waves below!

The Horse Rocks tell us that once the cliffs extended further out to sea, but over time, the waves have worn them back. The netting and rock bolts on the cliff-top indicate this is also an area prone to landslips and rock falls.

So why was a railway line built in such a precarious location? Was it an act of folly by the great Victorian engineer? Click to reveal the answer

Pat Wilson FRGS for devising, writing and photographing this viewpoint

Helen Rawling for edits and suggestions

"Such was the terrific force of the impelled water that along the sea-wall and railway huge coping-stones, probably averaging one ton each, were tossed about like corks.” - Illustrated London News report on a storm hitting the line, 1859

Not just another Devon seaside resort

Discover a different side to Teignmouth