Traffic charging by, busy pedestrians and the bright lights of a metro supermarket – we could be on any high street in any city.

But the shelves in this Tesco branch are stocked with tensions and protest.

Before us is Stokes Croft, a borough with its own People’s Republic, a thriving street art culture and a community hub with a philosophy of open-hearted and active engagement.

Just a mile behind us is Gloucester Road, reputably the street with the UK’s longest unbroken line of independent shops.

So consider this community’s reaction when this Tesco store was proposed in 2010. The multi-national supermarket was not welcomed with open arms…

For over a year, the locals campaigned peacefully to prevent the store opening. They sent postcards to the council, signed petitions and completed surveys which underlined residents' strong feelings. These peaceful actions were dismissed and tensions built.

On 21 April 2011 they culminated in a riot. Police reinforcements brought out hundreds of people ready to fight their cause, leaving the Tesco store badly damaged and question marks over the way the protest was handled.

Whatever the politics of that night, the level of resistance to a supermarket chain setting up on this street is our first taste of Bristol’s culture of activism and strong local values. 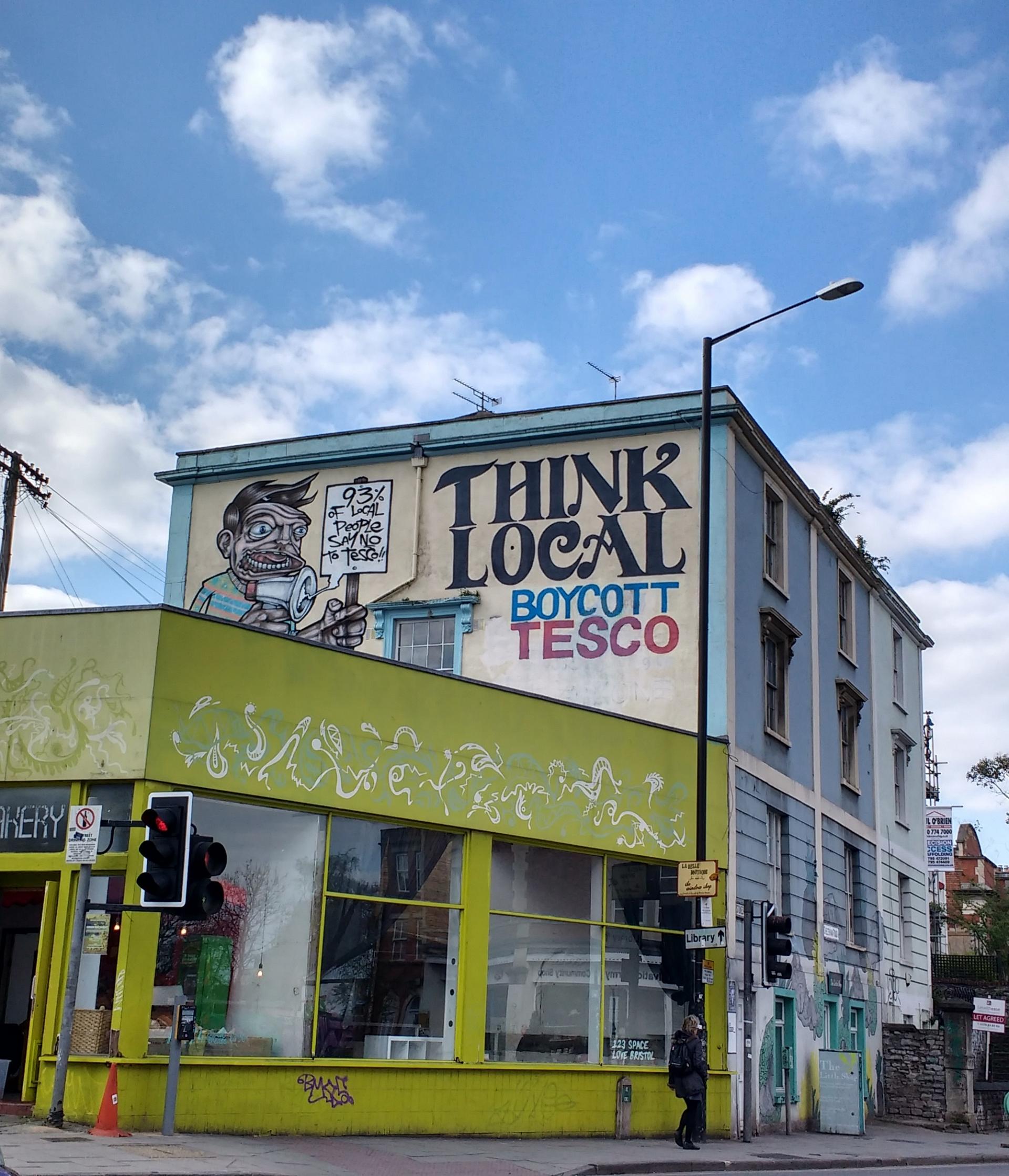 On the way to the next stop, look out for a large piece of street art above the bakery on the corner of Nine Tree Hill. Entitled ‘Think Local – Boycott Tesco’ it proclaims that ‘93% of local people say no to Tesco’. It provides a continual reminder of the battle still being fought between consumerism and localism.

Follow the main road down through Stokes Croft until you see a large 1960s block on your left called Hamilton House.

Hamilton House is a rather uninspiring looking 1960s building. But look closer. This place is more integral to Stokes Croft’s alternative culture than it would first seem. Bright artwork in every other window, painted bricks on its street-side walls, and a leafy veranda with people supping ales and ciders – this is no ordinary office block!

Originally built to replace buildings damaged in the Second World War, Hamilton House became neglected and renowned for squatters. But in 2008 a group of friends began turning it into a community centre. This large block is now a space where people “can grow, share, collaborate, and learn what it is to live in coexistence with each other”

What does this mean in practice? Over 200 community groups and locally-run organisations now use the building - from festival organisers, career advisors and architects to street artists, photographers and even puppeteers! With a bar, live music events, and café, Hamilton House not only fosters hundreds of small start-ups but has become a hub for the whole community. 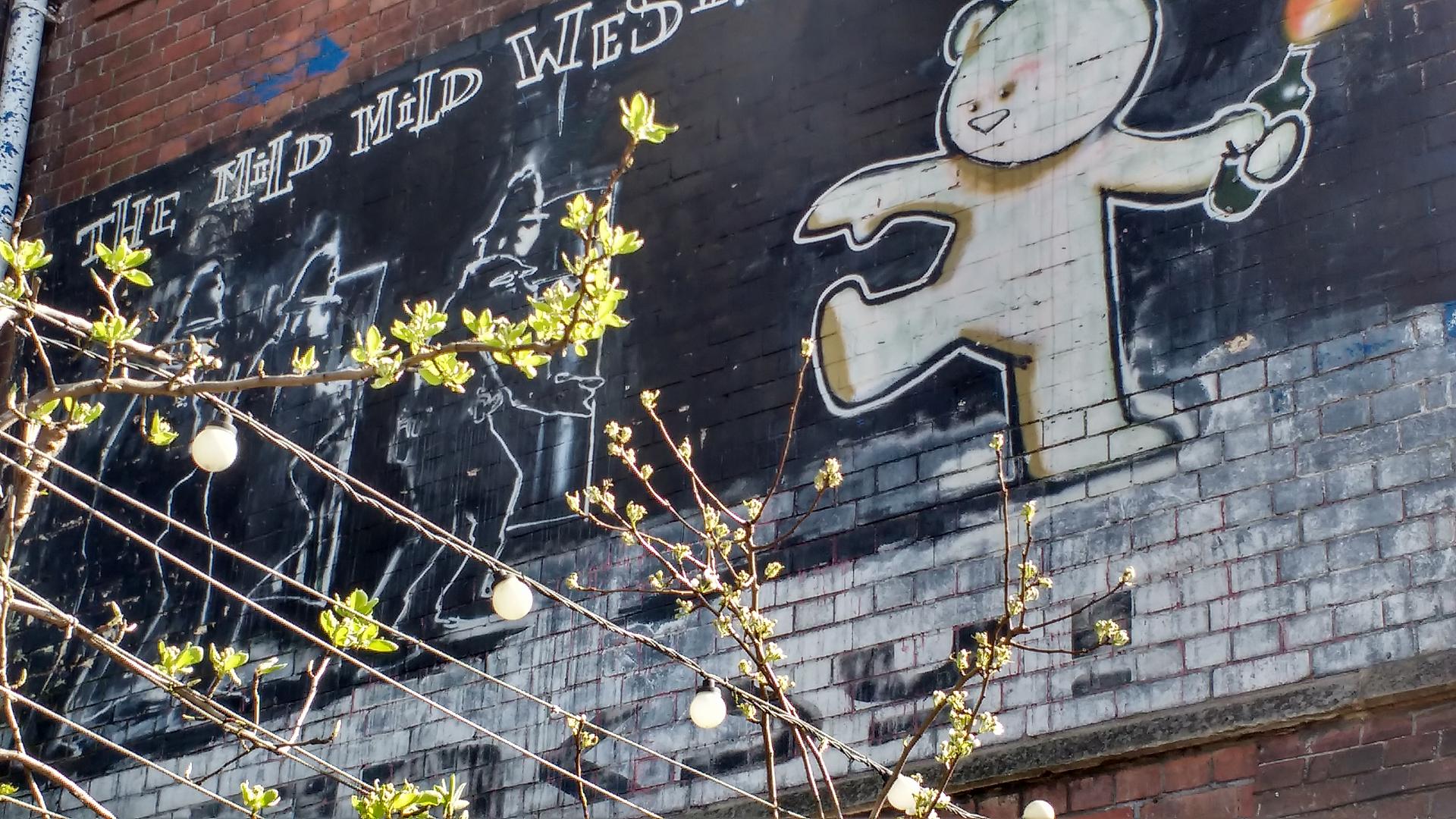 Look to the right of the front door and behind the ping-pong table you will see one of the most recognisable pieces by Bristolian street artist Banksy.

‘Mild Mild West’ depicts a huge, smiling teddy bear with a Molotov cocktail in his paw, facing three policemen holding up riot shields. As with most art, there are several theories about the meaning of this piece.

Is it a reflection of the Bristol riots of the 1980s, the hard-line approach police took against local raves in the 1990s, or simply an anti-establishment commentary? Located just a stone’s throw from the 2011 Tesco riots, it seems like life imitated art right here on these streets.

Continue along the road (the A38). As the road forks, keep to the left and follow the signs into the subway. Stop when you reach the central opening underneath the roadway.

Having just passed under a roaring road, this circus-like arena may have us looking for performing grizzlies, as its name would suggest. Rather than large toothy mammals though, The Bearpit tells a story of change and community engagement.

During the Second World War, Bristol’s international Harbour and the Bristol Aeroplane Company made the city a major target. Enemy bombers were able to trace a course directly into the heart of the city by following moonlight reflected on the River Avon. As a result Bristol was the fifth-most heavily bombed British city of the war.

Almost as soon as the war ended, rebuilding began. This area was demolished in the late 1950s. Its replacement, The Bearpit, is an interesting insight into 1960s design - especially the growing influence of cars.

This sunken ‘pit’ reduced pedestrians to a lower status than drivers. The system of poorly-lit underground walkways led to crime. Over the decades, shopping centres and commercial districts surrounded it in a kind of concrete jungle. Most people avoided walking through this dank dark space at all costs. 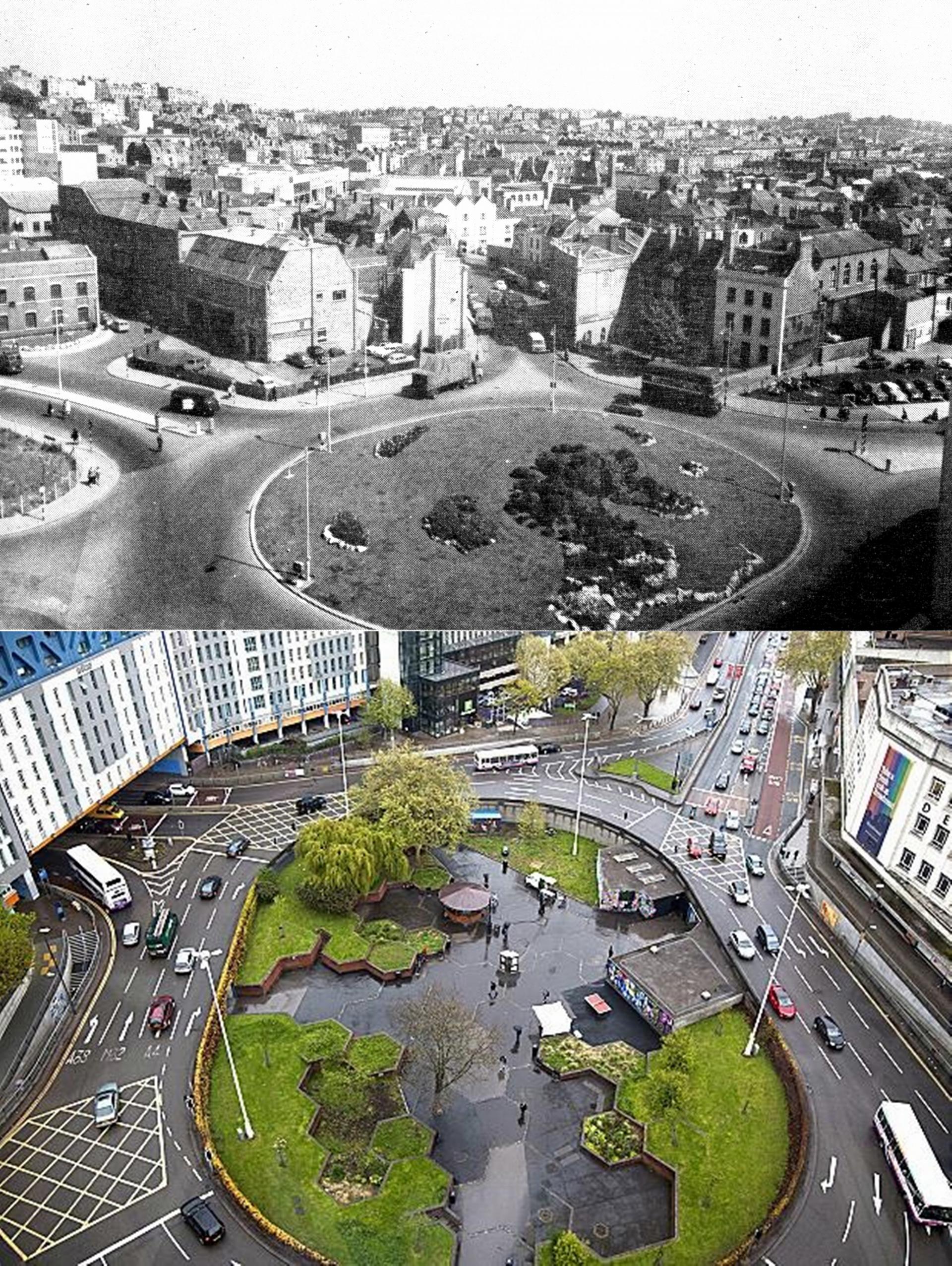 Today this roundabout is lined with colourful artwork, community stalls and green spaces. We can enjoy the smells of street food stalls or talk to campaigners for social or environmental justice. The Bearpit is a physical and cultural junction between the commercial and alternative quarters of the city.

The changes came about through community collaboration. The City Council and police met with the People’s Republic of Stokes Croft and resident groups to create the Bearpit Improvement Group. This unique partnership has started to create a dynamic and welcoming new social space.

Walk through the Bearpit to the underpass below a grey/white department store with a line of shops at its base. This should be almost directly opposite the way you entered. Go through the underpass then turn right at street level.

Follow the footpath past Debenhams and Primark. After Primark take the next road on the left - Union Street. Follow this through the shopping area until it stops opposite a park.

Turn right to follow Wine Street until it bends round at the junction of High Street and Broad Street. Follow Corn Street – a smaller pedestrianised road. Stop outside the grand Exchange building on your left.

This grand building was once Bristol’s official exchange for merchant traders. Between the seventeenth and nineteenth centuries it would have been a pillar of capital, profit and business. Today it’s a thriving indoor market.

So why have we stopped here on our exploration of the city’s alternative cultures and enterprises?

Look below the four grand pillars at the front railings. You will spot an unassuming blue sign. The Exchange now houses offices for the Bristol Pound.

In 2012 Bristol followed in the footsteps of Totnes in Devon to introduce an alternative currency. Bristol became the first city where such a currency could be used.

The theory is that the Bristol Pound encourages the local economy as money generated in Bristol stays in Bristol. In turn this grows a localised and sustainable economy, without relying on the unpredictable and often unethical goings on of the global financial market. 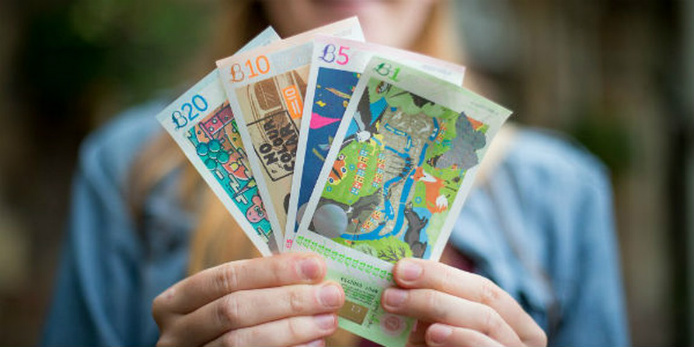 The organisers explain “Bristol Pounds stay working on the ground for us. They stick to Bristol, creating stronger communities and a greener economy.”

Although not necessarily an answer to world economic crises or something that everyone will embrace, it is a visual and coordinated effort by Bristol to stand out from the crowd and look for alternatives.

Over 800 businesses accept the currency, there are 19 exchange points, and over 1,000 people with accounts. To date over £1million of sterling has been exchanged into Bristol Pounds!

You can exchange some of your sterling for Bristol Pounds anywhere with a blue sign – so keep an eye out for them as we explore the city.

Continue down Corn Street as it turns into Clare Street. Carry on until it meets a main road (Marsh Street). Turn left into Marsh Street and continue to the end. Bear right and cross the road (Broad Quay) to meet the water of the Floating Harbour.

Keep the water on your right then cross over it at Pero’s Bridge (a curving metal bridge with a fog-horn sculpture above it). Continue ahead into a pedestrianised square then bear right past the @Bristol Science Museum. Enter another square with a large silver globe. Stop by a metallic tree next to it.

This glossy piazza couldn’t feel further away from the graffiti-lined streets of Stokes Croft where we began. So how is such a contrasting environment relevant in exploring Bristol’s alternative culture?

Here is a new chapter in the city’s cultural identity – Bristol the Green Capital. In 2015 Bristol took up the European Green Capital title, an “annual award designed to promote and reward the efforts of cities to improve the environment”. This meant Bristol had one year to prove its prowess as an environmental city of innovation and opportunity.

The Bristol Green Capital Partnership was set up as an independent leadership organisation whose aim was to make Bristol “a low carbon city with a high quality of life for all”. The ‘tree’ we are under now is a functional art installation, funded as part of the Green Capital developments.

The European Green Capital year may now be over but this artwork remains part of Bristol’s sustainability ambitions. The 36 solar panels mimic the way leaves collect and transform solar energy throughout the day. Visitors can charge their phones and access free Wi-Fi from the ‘tree’, sparking public engagement with the topic of energy use.

Devised by Demand Energy Equality and designed by local sculptor John Packer, the tree's panels were handmade by people recovering from addiction at the Bristol Drugs Project. It is a great example of community cooperation and innovation.

On this trail we’ve strolled through community activism, alternative currencies and carefully orchestrated city-wide change. Throughout we have seen how Bristol has developed as a place for challenging the norm. If the city continues to invest in the alternative, to find a green and community-focussed future, then who knows what people’s revolution it could power up next?

A walk on the wild side

A city walk in the heart of Bristol

Bristol may be famous for its balloons, bridges and boats, but look closer and the city is a beating heart of alternative culture. This trail follows some of its arteries.

Along the way we will explore Bristol’s history of social movements and change. We’ll see colourful houses, street art and and the green roots of environmental change.

Jo Kemp for creating and photographing this trail

Caroline Millar and Rory Walsh for advice and editing

The Bristol Pound for insight and advice

What is the mysterious entrance for in the Avon Gorge cliff face?

Should we build more roads and bridges to accommodate our ever-increasing use of cars?

Why does mystical Glastonbury Tor rise up from surrounding lowlands?