Why was Winchester once the capital of England? 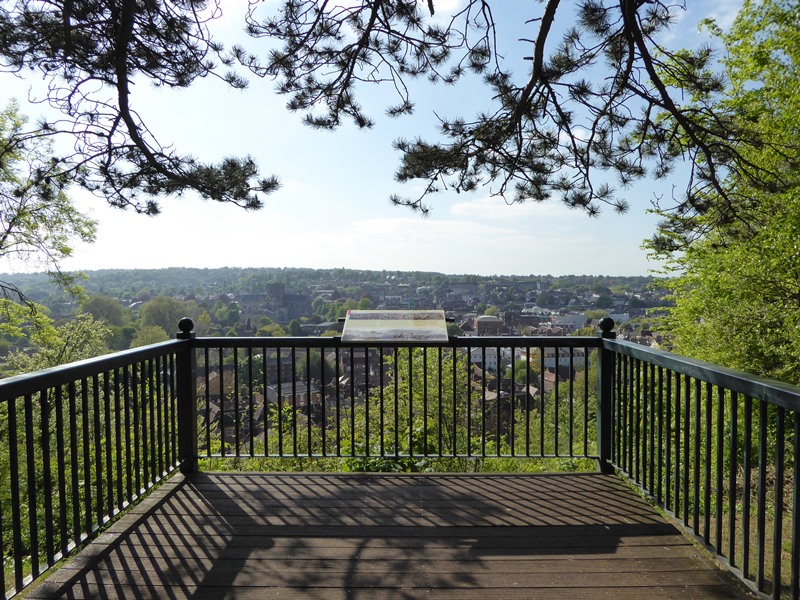 The platform is new but people have enjoyed this scene for centuries. Look on the information board at the engraving, made from the same spot in the 1730s. We can still compare most of the sights, including the Cathedral, College and Great Hall.

Another landmark is the High Street heading towards the horizon. Notice how it unfurls uphill and that surrounding buildings stand on high ground.

Winchester lies in a valley, surrounded by the hills of the South Downs. While these provide shelter, the River Itchen provides water and a route out to the North Sea. These natural features offered an ideal defensive site. The Romans recognised this and founded a town here in 72 AD.

Eight centuries later, somebody else saw Winchester’s potential - the man whose statue now gazes along the High Street. Known as Alfred the Great, he is perhaps best-known for burning some cakes. Yet he left us a greater legacy. Alfred ruled from 871 to 899. But he wasn’t the king of England. Alfred was the king of Wessex.

Today Great Britain comprises England, Scotland and Wales (the United Kingdom includes Northern Ireland). In Alfred’s lifetime these countries didn’t exist. At the start of his reign, the land we know as England was divided into different tribal kingdoms.

The largest were Wessex and Mercia. Wessex spanned today’s East Sussex to Devon, plus the Welsh border up to Merseyside. Mercia covered Kent, London, the Midlands and Yorkshire.

Saxon kingdoms were divided by physical obstacles like hills and rivers. From here on St Giles Hill we can see how Winchester became important through its landscape and location. The Downs were part of the Wessex / Mercia border and protected Winchester from attack.

The Great and the Danes
When the Romans left Britain in the fifth century they also left behind a power vacuum. The Saxon tribes constantly fought for supremacy. Then from the 820s a bigger threat arrived. Danish Vikings began raiding the east coast and their routs soon became rule. By 870 AD the Vikings controlled much of Mercia, East Anglia and Northumbria. And this ‘Great Heathen Army’ wanted more… 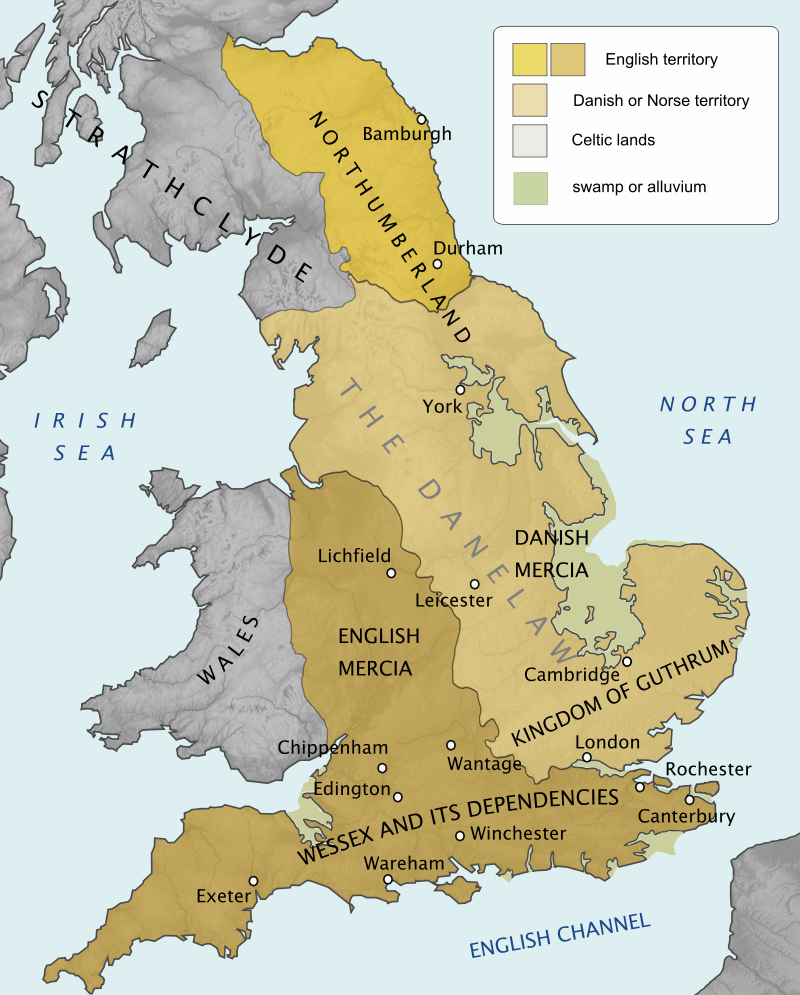 When the Vikings attacked Wessex, Alfred retreated to the Somerset Levels. Legends say that while mourning his lot he accidently burnt a peasant woman’s cakes. But Alfred regrouped. He formed an army in the South West and fought a series of battles for Wessex.

In 878 the two sides agreed a treaty after the Battle of Edington in Wiltshire. The Vikings settled in East Anglia and the North, and their territory became known as ‘Danelaw’. They left Alfred their other Mercian gains, including London.

From Kent to Merseyside, the expanded Wessex covered around half of today’s England. To protect his kingdom, Alfred fortified the towns. Winchester became the largest.

Besides its physical advantages, Winchester had a strategic location near London and the sea. So Alfred established his capital here, complete with a royal castle.

Alfred’s settlement with the Vikings was the first step to creating England as we know it. When the Normans invaded in 1066, the Anglo-Saxons had one king and Winchester was the national capital.

Winchester’s story is a reminder that capital cities - and countries - are political as well as physical constructs.

All the fun of the fair

St Giles Hill got its name from the medieval fair which took place here annually on St Giles Feast Day (1 September). Originally a small holy ritual, it became a 16-day festival with games and jousting. During St Giles Fair other markets as far as London were closed. Buyers and sellers arrived from even further, including Ireland and mainland Europe. The fair declined after the 1350s because of the Plague - and as locals got fed up of the disruption!

Where is the capital city of England? Today almost everyone in the world knows the answer.

London is internationally famous - but it hasn’t always been the English capital. If we had asked the question at different times in the past, we would have got different replies.

When the Romans settled in Britain (after 43 AD) they chose Colchester in Essex as their capital. Some 900 years later the Anglo-Saxon capital was here, Winchester in Hampshire.

Why was Winchester once the capital of England? Click to reveal the answer

Caroline Millar and Helen Rawling for adice on the text

“An exceeding pleasant town, enriched with a beautiful cathedral and surrounded by fresh-looking country” – John Keats, 1819

Explore the unique river at the heart of Winchester

What's the story behind this throne of Saxon Kings?