Why do many of our rare native species only survive in nature reserves?

Wildflowers, grasses, butterflies, insects and other species thrive at Queendown Warren because this is a special type of environment - chalk grassland. It is one of Britain's richest wildlife habitats but thanks to intensive farming, we've lost 80% of it. Today chalk grassland only exists in scattered and isolated pockets. 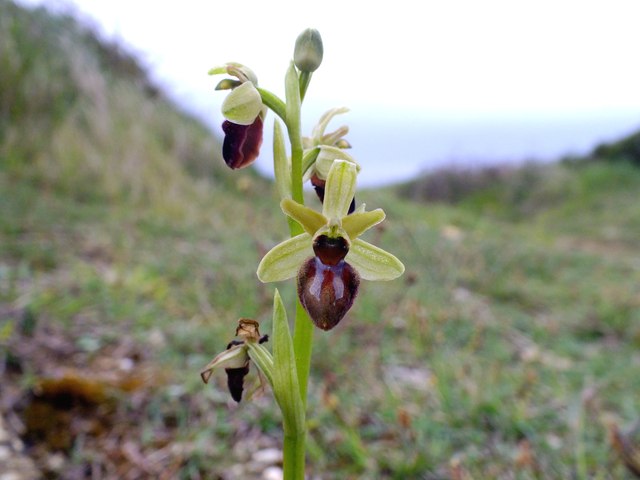 Queendown Warren is a small piece of land that has escaped the effects of intensive farming. From here in the reserve, look at the patchwork of neighbouring arable farmland.

Intensive farming increases crop yields and efficiency for the farmer. It also threatens our wildlife habitats though. The use of inorganic fertilisers, slurry, herbicide, re-seeding and pesticides, along with cutting grass early for silage, affect flowering plants and reduce the land’s biodiversity.

Oddly enough, chalk grassland is a man-made habitat. Stone Age farmers were the first to clear Britain’s woods for pasture to graze their sheep. These hungry animals regularly ‘cropped’ the soil, creating tough springy grassland where only very particular wildflowers and grasses could thrive.

At Queendown Warren these include lady’s bedstraw and fairy flax, which have evolved tiny leaves to minimise moisture loss. Because of such nationally important rare species, this land is designated as a SSSI (Site of Special Scientific Interest) and managed as a nature reserve by Kent Wildlife Trust.

In areas like here in the Kent Downs, we can find chalk grassland thanks to the ground beneath our feet. The underlying chalk rock is porous (unable to hold water) and overlain with thin poor soils. If properly managed, by allowing sheep to graze and encouraging rabbits, encroaching scrub is kept under control and native species can flourish.

Nature reserves are important for the plants and animals they support. But they are equally important for us too. At a time when biodiversity is under threat and wildlife diminishing, places like this are a chance to see and feel just how rich in birds, flowers, insects and mammals our countryside once was.

The good news is that conservation organisations are working to restore these threatened habitats. Kent Wildlife Trust have recently bought 7.5 acres at nearby Polhill Bank in the Darenth Valley. By removing the wheat crop and introducing grazing livestock, the land will revert back to chalk grassland once more.

Just off the M2 motorway, between Chatham and Sittingbourne, is a small nature reserve known as Queendown Warren. This is an orchid lovers’ dream. At least ten native species are regularly spotted here, including the incredibly rare spider orchid.

In early summer, the reserve becomes a fragrant purple carpet. The orchids’ strong sweet smell and nectar attract an array of butterflies, including the tiny Adonis blue and the rare Silver-spotted Skipper.

Why do many of our rare native species only survive in nature reserves? Click to reveal the answer

Thanks to Kent Downs AONB for information and photographs and Rory Walsh for edits.