Why have people ‘walked the chalk’ at Ivinghoe Beacon since the Iron Age?

From your high vantage point on the edge of the Chilterns, look down over the flat expanse of the Vale of Aylesbury, then back behind you at the rolling grass slopes of the hills you’re standing on.

The stark difference in height is caused by the two areas consisting of two different geologies: the Vale is mostly clay, while the Chilterns are formed of chalk.

The meeting of these two rock types forms what is called an ‘escarpment’, created by what is known as differential erosion: as clay is such a soft rock, it is eroded away much quicker by wind and water than the more resistant chalk, leaving behind a series of hills.

This type of landscape makes a perfect viewpoint, appreciated by modern day visitors, and thousands of years ago, an ideal stronghold and lookout for a fort. In fact, in the Iron Age (a period from about 800 BC to the Roman invasion of 43 AD), such a fort existed here. Look around carefully and you can just about still see the small raised outlines of the structure.

It wasn’t all about defence though.

People have also farmed this land for centuries. 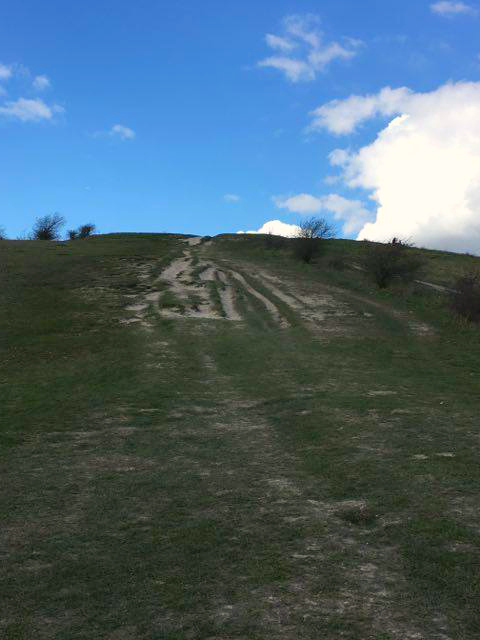 If you’re here in summer, keep your eyes peeled - you can see the ridge-lines from ancient plough furrows below the main hill. If it’s a rainy day on the other hand, you may have had trouble walking the ascent to the top. Imagine how difficult it would have been for tradespeople and farmers walking the footpaths, dragging carts laden with goods through the mud and bad weather!

However, the Beacon is changing.

The chalk scarring you can see is not natural; that’s the areas of exposed white rock, where the grass has been worn away, that you may have noticed on either side of the footpath on the way to the top of the hill.

The thousands of people that walk up to this geographically and historically rich hotspot each year are contributing to human-induced erosion. As people divert away from the footpaths, they remove the vegetation, making it easier for water droplets and wind to wear down the chalk underneath.

This can cause damage to the habitat by changing the vegetation and soil structure, as well as altering the natural beauty and quality of the landscape.

People have ‘walked the chalk’ here since the Iron Age, for trade, settlement and today for pleasure. But sat upon its imposing chalk ridge, Ivinghoe Beacon reminds us that although some landscapes may seem indomitable and immoveable now, they are perhaps more fragile than they first appear.

Creatures from the deep

Chalk, the composite rock of Ivinghoe Beacon, is chemically known as CaCO3. Look around you, and find an area of chalk scarring, taking a closer peek at the rock.

Chalk is sedimentary: geologically speaking, that means it is formed at the bottom of the sea, from multiple layers of shells of long-dead sea creatures.

Yes that’s right- although the Beacon is now 70 miles from the sea, in the Cretaceous period (65 million years ago), the sea was at a much higher level, which would’ve covered the whole of present day South-East England, and helped to form the hills you now see around you!

A local icon, a sight familiar with the residents of the surrounding towns and villages, and the start of both the Ridgeway and Icknield Way long distance paths, Ivinghoe Beacon stands at 249 metres above sea level, an imposing gateway to the rolling hills of the Chilterns.

The path you have just walked up, and the landscape around you, was also ascended by thousands of people before you over thousands of years.

Why have people ‘walked the chalk’ at Ivinghoe Beacon since the Iron Age? Click to reveal the answer

Manon Burbidge for writing and photographing the viewpoint. Manon is a BSc Geography student at the University of Durham and an RGS-IBG Geography Ambassador

Jo Kemp and David Kemp for edits and advice

Why is Sussex lined with so many north-south facing sunken lanes?