Looking at the landscape from this viewpoint you can probably appreciate that much of what you can see is ‘man made’. Let’s start with the three-storey, redbrick Chevening House itself.  It was built about 1620 as the country house for Lord Dacre, a member of the ‘landed gentry’ or land-owning classes.

Besides the house, the estate also includes gardens and 280 hectares of parkland (one hectare is the size of a sports field if you want to visualise it!). The estate lands stretch north up to and including the beech woods that cover the steep scarp of the North Downs. To the south, the estate encompasses farmland almost as far as the M25. 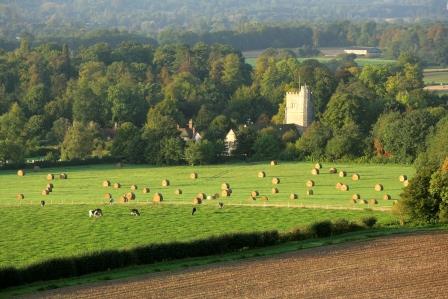 Just to the right of the house, see if you can spot an Italianate garden with lawns and pleasure grounds beyond. Rows of yew trees border the lawn and a high brick wall screens the pleasure ground off from the road.

Looking up to the woods, the beech trees you can see were planted here in the early nineteenth century. A network of ‘drives’ were cut through them for the landowner to ride and hunt in.

Along with these visible changes to the ‘natural’ landscape, there are other invisible ways in which the Chevening estate has influenced how the land is used.

Before the estate was built, two ancient trackways passed close to where the house now stands. One was the Pilgrims Way - the historic pilgrims route from Winchester to Canterbury following the southern slopes of the North Downs.

The other was the Rye Road, also known as the Fish Road, along which horses laden with baskets of fish travelled from the coast at Rye up to London’s markets. In the late eighteenth century both of these roads were rerouted, and new ones built to increase the privacy of the estate.

Chevening House has shaped the political landscape too. When the 7th Earl died in 1967, he had no children to inherit the estate.  Fearing that the house would be sold and broken up, he ensured it would remain intact after his death by putting it in the hands of a trust.

As a result, Chevening House’s occupancy can only be nominated by the Prime Minister. The current occupier is the Foreign Secretary. We can only imagine what role this hidden house plays in the political life of the country and what far-reaching decisions are debated right here.

A church, a handful of cottages and a scattering of farms are all that make up the quiet village of Chevening in Kent.  Within earshot of the M25, but tucked away down a country lane, thousands of cars and lorries rush past it every day.

Here, hidden from view, is an English country house that has both reshaped the physical landscape we experience today and the political one that shapes our lives.

How has hidden Chevening House shaped the local and global landscape? Click to reveal the answer

Chevening is alleged to be the model for Rosings Park, the home of the awful Lady Catherine de Bourgh in Jane Austen’s Pride and Prejudice