Why is the Sussex High Weald lined with sunken lanes in a north-south direction?

Most of the lanes, bridleways and footpaths in this area were originally created many centuries ago by farmers and their pigs!

From as far back as the Neolithic period (about 4300 - 1400BC) or even earlier, farmers from the surrounding South Downs, North Downs and coastal plains would drive their pigs into the Wealden woods each autumn to fatten them on acorns. This practice is known as pannage.

The Weald was the most important place for pannage in Britain. The Domesday Book tells us that in 1086, around 150,000 pigs would have been driven to and from the woods of the High and Low Weald! That’s a lot of pigs! 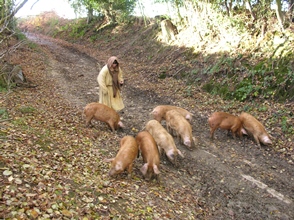 Farmers from a particular village took their pigs to the same woodland place year after year. They called these places ‘dens’. In time, people began to live in the dens all year round and they became permanent settlements. Many have kept their ‘den’ place names to this day. For example, Tenterden means ‘The den of the men of Thanet’.

See how many ‘den’ place names you can spot on a map of the area!

The pigs and their drovers going back and forth between the villages and dens formed routes known as ‘droves’. These routes can stretch for up to 20 miles between a village and its den.

Today, the radiating, linear pig droving routes are easy to spot on an OS Explorer map and can still be traced – following a combination of footpaths, bridleways and lanes – all the way from the North and South Downs to the very heart of the Weald. 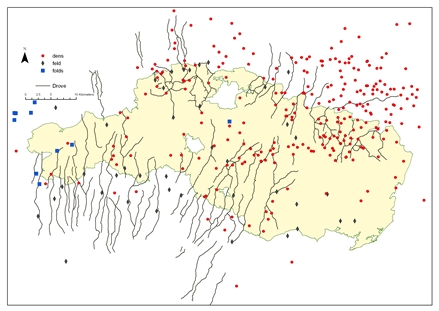 Centuries of use by many trotters, feet, hooves – and, later, cartwheels – have worn the soft ground away so that today, many of the routes have deeply sunken sections; whether in the form of sunken tracks or narrow lanes with high banks.

And, when you walk down one of these sunken routes – following in the footsteps of the drovers and their pigs – your own feet too are wearing a groove in the lane and adding to thousands of years of history!

Kipling and the High Weald

Bateman’s is a lovely house to look at, but its beauty is more than skin deep. It has a wonderful atmosphere, too. You can see why Kipling loved living here and why he wrote so many stories based on people and places he knew in the Dudwell Valley and surrounding area.

Puck of Pook’s Hill, Kipling’s children’s book written in 1906, is based in the Dudwell Valley where the two central characters, Dan and Una, live. It mentions real places, such as Willingford Bridge, Bog Wood and Dallington. See if you can spot them on an OS Explorer map of the area!

‘Pook’s Hill’ is thought to be the hill that can be seen to the south-west from the lawn at Bateman’s. Its real name is Perch Hill: see if you can spot nearby Perch Hill Farm on the OS Explorer map. 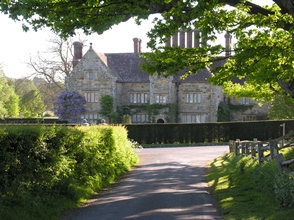 You are standing at the top of Bateman’s Lane, looking south, down through a ‘tree tunnel’ to the beautiful Dudwell Valley below.

The sides of the tree tunnel are formed by the steep banks of the sunken lane at the bottom and the overhanging tree branches at the top.

Rudyard Kipling who lived at nearby Bateman’s called this lane an “enlarged rabbit hole” and it is a very good description – particularly in the leafy summer months.

This is an example of a typical High Weald sunken lane – one of the area’s special features.

Why is the Sussex High Weald lined with sunken lanes in a north-south direction? Click to reveal the answer

“It was the heartbreaking Locomobile that brought us to the house called ‘Bateman’s’. We had seen an advertisement of her, and we reached her down an enlarged rabbit-hole of a lane” -Rudyard Kipling.

Step back in time and discover the High Weald

Why is there a church without a village on Kent's Romney Marsh?