We start our trail here at the old lighthouse.  There are great views across Romney Marsh from the top of the lighthouse, but even from here at the bottom you can take in most of Dungeness.

The first thing you’ll notice is the landscape is flat and without these buildings the level land would become monotonous. Under this flat landscape, the skies seem even bigger and bluer (or greyer depending on the weather!).

The view is dominated by the two power stations, two lighthouses and the starkness of the unbounded shingle and scrubland stretching out for miles ahead of you.

We’ll find out more about the power stations later. But the first question to ask is why are there two lighthouses here? There have actually been five lighthouses at Dungeness over time. This one is the fourth, the black and white striped lighthouse to our left (east) is the fifth and newest.

To find out why we’re going to walk towards the new lighthouse.

Look out beyond the shingle beach and notice how choppy the sea is here. See if you can work out which direction the waves are moving in. It’ll depend on the prevailing wind but you might notice the waves are moving from the right (in a south-westerly direction from the English Channel) as well as from the other direction (east from the Straits of Dover) and meeting here.

The waves from east and west pick up sediment like sand and shingle from the beach and deposit them here in a process known as longshore drift. This process has created a triangular shaped spit of land that sticks out into the sea. This feature is called a ness (from where Dungeness gets its name) or sometimes a naze (as in Walton-on-the-Naze).

This geographical feature is a clue to why several lighthouses have been built here. The constantly moving sand and shingle transported by the action of the waves has changed the shape of the coastline, extending the shingle beach and effectively pushing the sea further away from the lighthouse. As a result Dungeness is now the largest shingle beach anywhere in Europe.

We’ll find out more about this shifting shoreline as we continue the trail.

Retrace your steps back to the road. Walk along the road passing abandoned railway carriages converted into dwellings.  At the second track on the right, turn off the paved road and walk towards a white house with red painted window frames and a scattering of outhouses.

3 Shacks and railway carriages on beach

Dungeness has been classified by the Met Office as Britain’s only desert. This is due to its dry climate and also to the expanse of shingle and poor soil that supports very little vegetation. But if you look around, you’ll see that the landscape has been shaped by more than just natural forces.

You might already have noticed the unusual, random collection of wooden shacks, lean-tos and one-story bungalows built along the road and out on the shingle.  Keep an eye out too for dwellings that have been adapted from old railway carriages.

In the nineteenth century many farmers sold their land to working class Londoners who then built their own weekend or holiday homes. There were little restrictions over how the houses were built. Many were simple beach houses that were extended in piecemeal fashion over the years. Some took advantage of the railway carriages that were left stranded on the shingle when the train line was abandoned and adapted them into homes.

Gradually more and more people chose to retire here and escape from the city. Huddled on the beach, there was no need for a formal garden as plants or crops couldn’t grow on the shingle. Residents built their own pathways, boundaries were not formally defined and buildings were bodged and escaped planning permission. 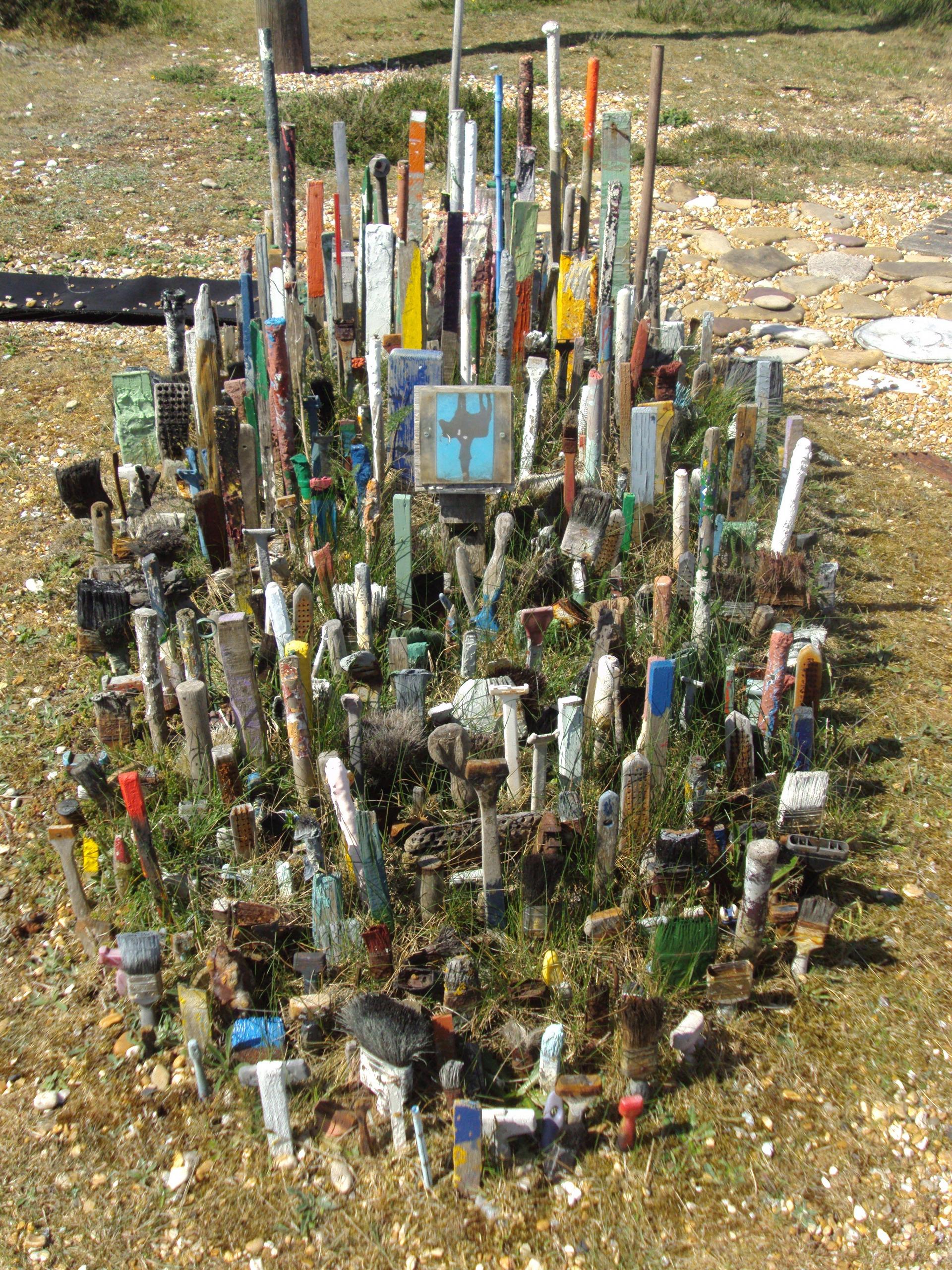 Today we tend to admire these ramshackle shacks and shanties. They’re fun, creative and built from recycled materials. They add to the feeling of this being a wild landscape, not dissimilar to the American West where hardy pioneers made their home from whatever materials they could find.

Wander round some of the abandoned and working fishing boats and paraphernalia on the beach.

Though the beach here might look like an abandoned junkyard there are still some working fishing boats from which local families make their living. You can still buy fish direct from the boat from a third generation local fisherman.

The various fishing and rowing boats, winches, ropes, nets, abandoned carriages and containers make up a living history of the fishing industry. The decayed and derelict rowing boats beached on the shingle are relicts from an earlier era when fishermen used simple rowing boats and families came down to the beach to help land the catch.

See if you can spot wooden and iron hand cranked winches used to pull boats up the beach before motorised versions took over. You can still see some of the old tanned fishing nets along with the more modern and highly coloured nylon nets.

Today this flotsam and jetsam has become a mecca for photographers drawn to its air of decrepit romanticism.

Find the obvious shingle track back to the main road (in the direction of a house with a square white tower). Continue up along the main road and stop outside a black painted beach house with yellow window frames.

On the trail so far we’ve tried to explore what makes Dungeness such a unique landscape and think about how this has been created both by natural processes like longshore drift and human intervention. Places like Dungeness are also influenced and in part created by how artists and writers have chosen to depict them.

This distinctive black beach house with its unusual garden is Prospect Cottage famously owned by the late artist and filmmaker Derek Jarman. Today it’s become a site of pilgrimage for his admirers and for gardeners inspired by his rustic, driftwood sculptures made from rubbish washed up on the beach and tough plants that survive the baking sun and wind. 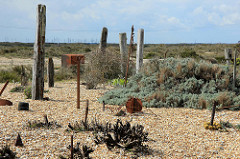 It’s also a garden without any borders, stretching away into the shingle desert. It’s not quite clear where it begins and ends. Jarman’s cottage encapsulates the idea of Dungeness as an escape. The poem written on the south wall, John Donne’s The Sun Rising echoes the idea that this is a place out of time, without life’s normal rules and regulations.

A little further along, just past Prospect Cottage and set back from the street is The Shingle House, one of a series commissioned by architect and writer Alain de Botton. Though it’s black tarred shingles are designed to fit in with the landscape, it has little in common with the simple shacks hastily erected as holiday homes by working class Londoners. A three-night stay here costs over £1,700.

Continue along the road in the direction of the large white lifeboat station. Just in front of the station on the right hand side of the road you’ll see a square black brick construction. This is a tanning copper used to preserve fishing nets.  Just ahead is the Pilot Inn – a good stop for lunch. Follow the road as it bends to the left and crosses the railway tracks. Head towards the row of white terraced coastguards cottages. You will see a green public footpath sign just in front of them on the road. Roughly follow the direction of the footpath sign and make your way across the shingle back towards the old lighthouse. Stop about halfway when you’re in sight of the square nuclear power station.

We’ve already learnt that Dungeness is classed as Britain’s only desert. Walking back across this shingle scrubland it appears that nothing much grows here. Stunted prostrate trees like blackthorn and yellow-flowered bloom along with tough plants like sea cabbage cling on to life in this hostile landscape. But there is one man-made structure that through creating a windbreak has actually helped improve plant life here on the shingle.

Perhaps you can hear its low throbbing hum. In this low-lying relatively featureless landscape, the mammoth Dungeness Power Station is hard to miss.  It’s actually two power stations (one decommissioned the other still active) and is one of nine nuclear plants in the UK.

We heard earlier that wave action has transported sea pebbles around the coast to create a headland. It’s still a dynamic, active coastline today and the power of the waves continues to shift the shingle away from the power station. Dungeness nuclear power station was literally built on shifting sands.

To combat this, shingle is taken by truck from the east of the headland (where it tends to build up) and put back in the sea west of the power station. It’s an ongoing battle to maintain these sea defences and raises the question of why a power station was built here in the first place. If you look at a map of the UK’s power stations you’ll see they are all positioned on the coast. That’s because power stations use massive amounts of water for cooling the reactors. If they were built inland, thousands of gallons of water would need to be transported to them using even more power! 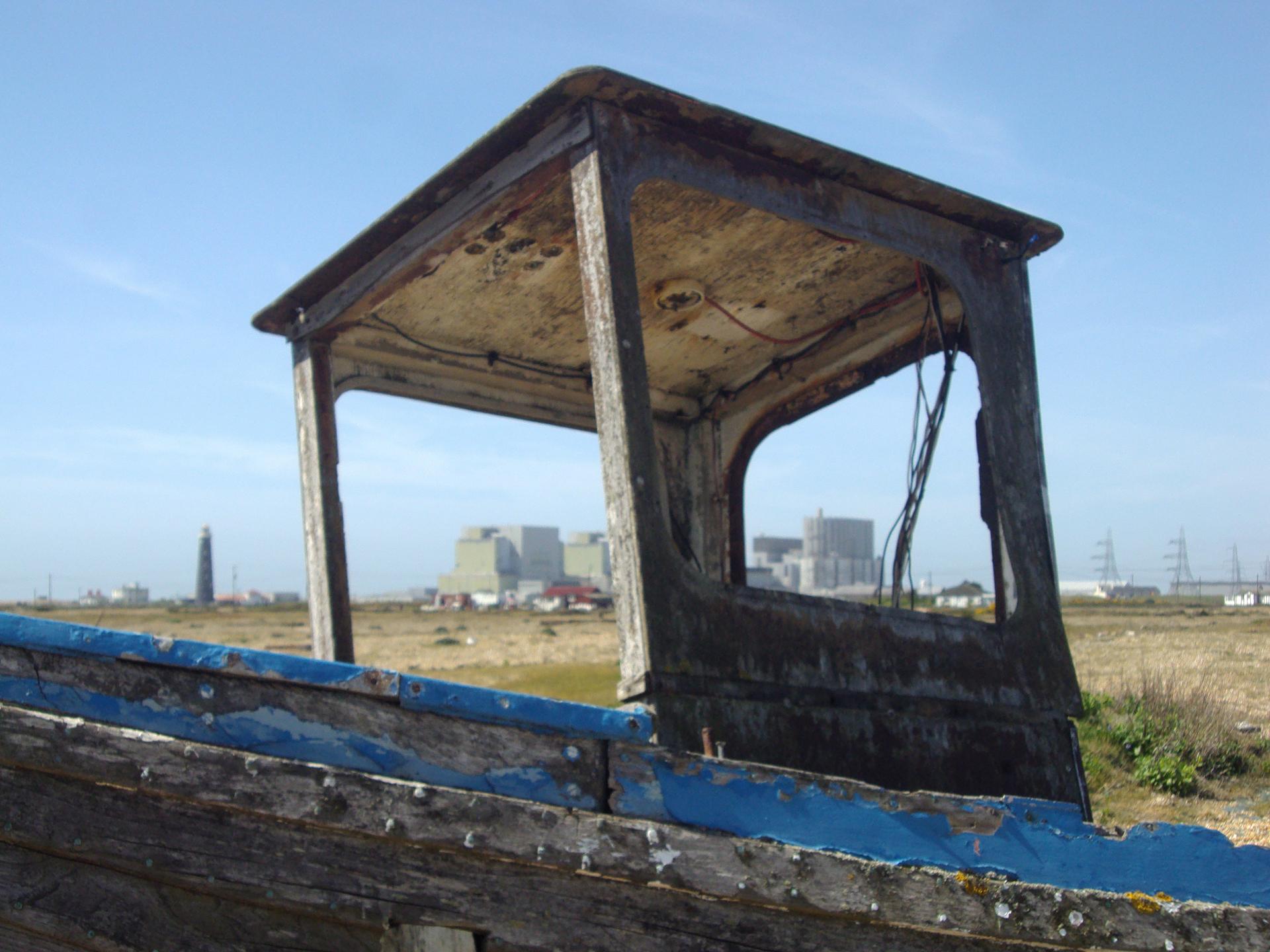 We hope you’ve enjoyed this walk around Dungeness in Kent. It’s been described as a ‘marmite landscape’ as people either love its wild beauty or hate it.  Whatever your opinion, we hope at least that you’ve come to understand it a bit better. From the shifting shingle that has changed the shape of the coast to the curious, tumbledown homes, from an artist’s garden inspired by the sea to a nuclear power station, Dungeness is undeniably unique.

Continue across the shingle picking a path back towards the old lighthouse where you started the trail.

Bleak, desolate, wild, forbidding. There are many ways to describe Dungeness. But it’s only when you experience it for yourself that you understand the appeal.

With its shingle nose sticking out into the North Sea, Dungeness is bounded by water on two sides and overshadowed by a massive nuclear power station. It’s also been designated as Britain’s only desert.

Discover what makes this landscape unique, how it has changed over time and reflect on some of the issues facing it today.

See how another coastal landform has given shape to our shores