What festive solution has come to the aid of St Andrews' famous golf courses?

St Andrews is known as the home of golf because the game has been played here since the 15th century.

The town is located on the East Neuk (bend of coast) of Fife with a long stretch of beach and plenty of sand dunes. It is the dunes that make it such a good environment for playing golf and explain its long history here. The sandy soil means the land drains well and provides a firm golfing surface all year round. The gently undulating surface provides an enticing challenge for golfers but means the land is not generally wanted for farming. 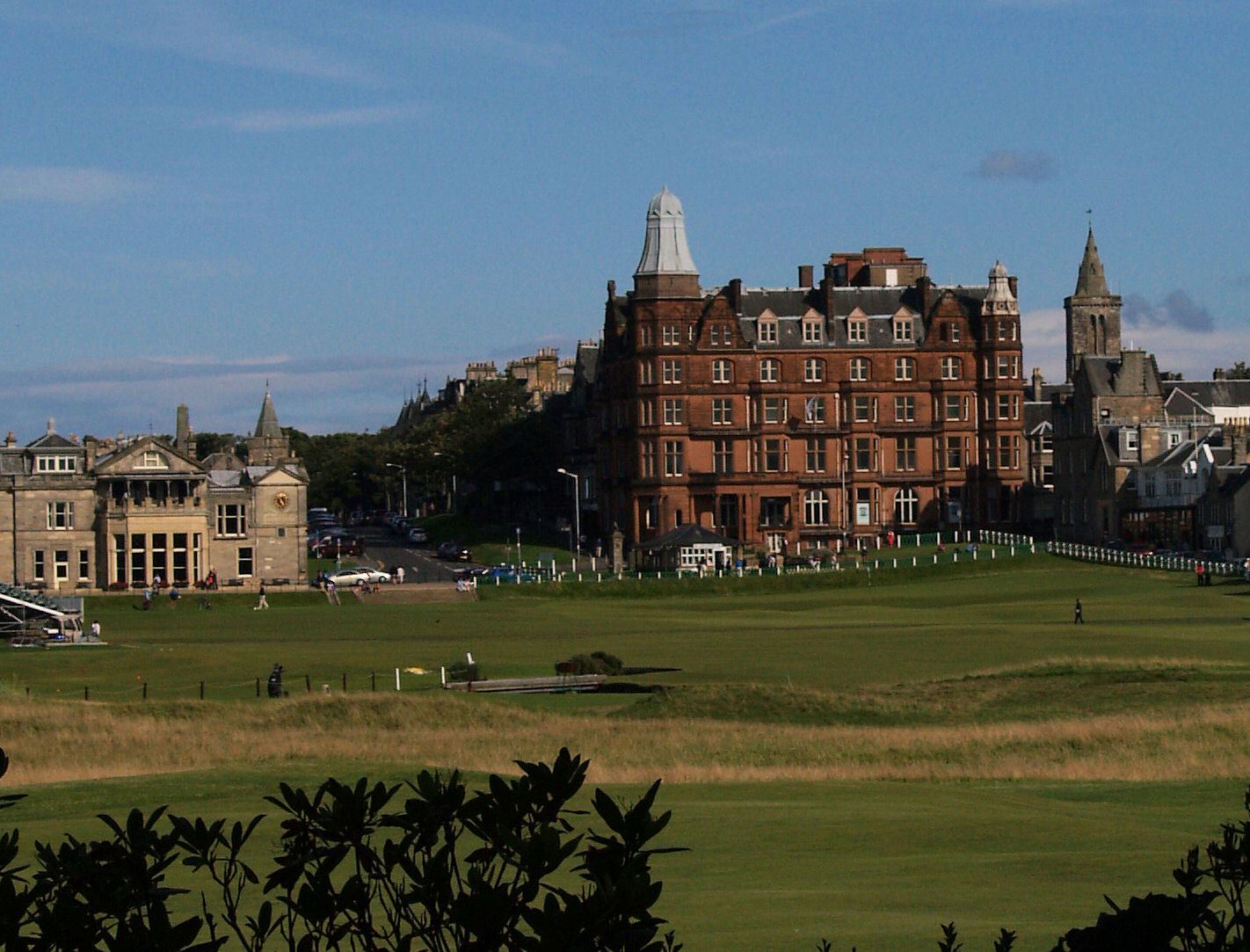 Today there are seven internationally renowned courses around the town. However, the New, Old and Jubilee Courses, which adjoin West Sands beach (where we are standing), are at increasing risk of flooding.

A combination of factors, including global warming, rising sea levels and an increase in extreme weather events, are to blame. Waves wash sand up the beach and winds strip it from the dunes in a process called erosion. This leaves the greens at the mercy of storm surges and high water. Some predictions claim that the Old Course could be lost entirely by 2050!

Golf is a central part of St Andrew’s heritage. Records show that locals played the game on land here from at least 1552. Golf is also vital to Scotland’s economy; when the Open Championship was held at St Andrews in 2015 it generated over £140 million for the country. Besides offering enjoyment for tourists and locals, the courses are also a mosaic of habitats for a range of wildlife including brown hare, stoat and plover (a wading bird). Giving up the land to the sea is just not an option.

West Sands Beach and the dunes act as a natural buffer between the golf courses and the sea. The best way to protect the courses therefore is to protect the beach and dunes from erosion. The course managers, St Andrews Links Trust, work with a series of partners including Fife Coast & Countryside Trust (FCCT) and Scottish Natural Heritage to do this. They have tried a range of methods including 'hard' (technical) and ‘soft’ (more natural) approaches.

Hard approaches have included installing 100 metres of metal caging in the north of West Sands. The metal cages are filled with stones and covered with sand so they look like a long dune. This protects the real sand dunes behind it. The Trust also collected sand from Out Head (at the mouth of the River Eden) and moved it further south down the beach, a process called beach feeding.

Soft approaches have included using chestnut paling fences and planting Marram grass. Both of these trap sand and help stabilise the dunes. Once plants start colonising them, the dunes become more stable and protect the land behind from the ravages of waves and wind. 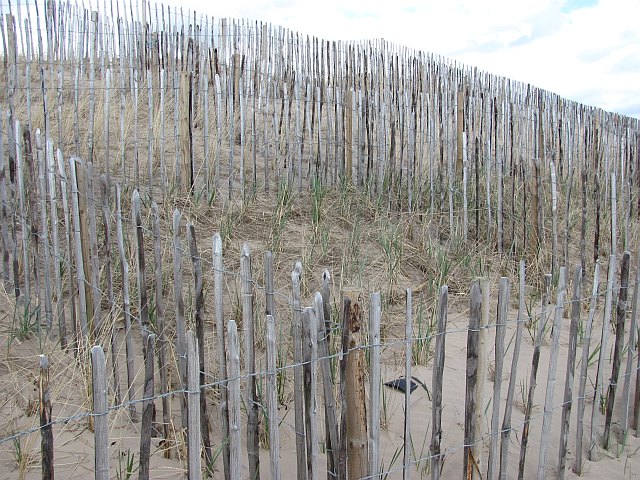 But what about the ‘festive solution’?

In Winter 2010 a storm surge wreaked havoc on the dunes in West Sands. Waves breached the dunes in several places and storm winds blasted through them, creating ‘blowouts’ (holes and depressions in the sand).

Such bare and exposed stretches of sand encourage more dune loss and let water through to the golf courses beyond. The key to protecting the courses is to fill in any holes and allow the dunes to start regenerating themselves.

The Links Trust and FCCT had an ingenious idea about how to do it.

Since it was the festive season they put out a call for residents to donate their Christmas trees. Ranald Strachan, a countryside ranger for the FCCT said "Christmas trees are often landfilled after a short use at Christmas, so we asked local communities to donate them to coastal protection instead". About 100 trees were gathered and volunteers used them to fill the holes in the sand dunes. "Christmas trees have a great, open structure and trap sand well", says Strachan. Gradually the trees were covered with sand and have become part of the dune system, protecting the golf courses behind them once again. 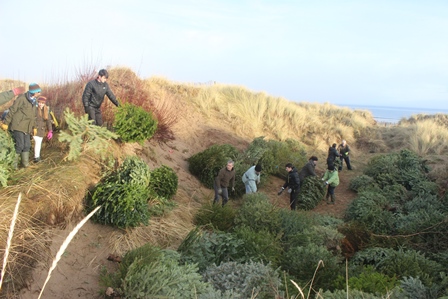 Understanding and enhancing the natural processes at work here (sometimes in rather innovative ways!) has proved the most effective way to sustain the beach and dunes, and therefore the golf courses beyond.

The Fife Coast & Countryside Trust manage many countryside sites throughout Fife including the Fife Coastal Path, the Lomond Hills and the vast Eden Estuary nature reserve and bird sanctuary adjoining the West Sands.

Today the term ‘links’ is often used to refer to any golf course; however a links course is generally one in a coastal location with sandy soil, sand dunes, sea grasses and very few trees.

The very first golf courses were links courses and they developed in Scotland. In fact, the word links comes from the Anglo-Saxon word ‘hlinc’ meaning ridge and referring to an area of coastal sand dunes. These environments were perfect for golf because the sandy soil means the ground drains well, so can be played on all year around. Sandy soils are generally poor so there was little competition with farmers for use of the land. Few trees grow here so there are no major obstructions, but grasses are common and help bind the soil to provide a firm ground for playing on.

The undulating ground is a good challenge for players as are the coastal winds that whistle around the dunes. The dunes also provide sheltered areas in their lee that make good spots for golf greens. On early courses the order of play of holes was varied, often embracing the shifting sands of the dune environment!

Golf courses in Britain today are still commonly found in these coastal environments; think of England’s ‘Golf Coast’ between Southport and the Wirral, or the ‘Atlantic drive’ of courses between Saunton and West Cornwall. And of course Scotland’s east coast, where it all began, will always be the home of golf for many fans. 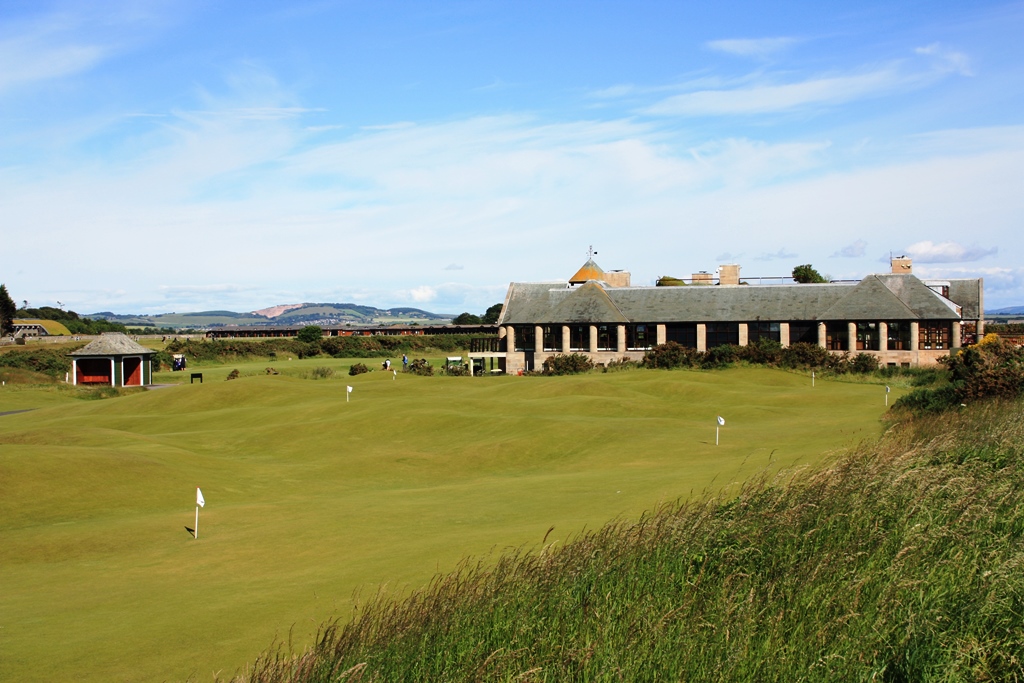 Take a deep breath and savour the salty bite of the sea air.

To one side of us the North Sea rushes back and forth up the sweep of the beach. To the other side the manicured greens and venerable clubhouse tell us we are in the home of golf. West Sands beach is the golden paradise where these two worlds meet.

The sea is a beautiful but challenging neighbour for the golf courses of St Andrews. Future forecasts suggest that large sections of the greens could be lost to the sea over the next couple of decades.

To prevent this from happening, the sand dunes hold a secret which helps to protect the golf courses and the town’s heritage.

What festive solution has come to the aid of St Andrews' famous golf courses? Click to reveal the answer

Ranald Strachan, countryside ranger for the Fife Coast and Countryside Trust for talking to us about the work of FCCT in St Andrews

St Andews Links Trust for information on preparing the viewpoint

Aerial Photography Solutions for use of the aerial image of St Andrews. Further works available on their website

The Athens of the North

The tale of a tail

How did volcanoes, tribes and ancient poems give Arthur’s Seat its name?