How have past pilgrims made their mark here?

Aside from its draw as a Neolithic site, the circle is in a stunning location. On a thin spit of land between Loch Harray and Loch Stenness, this peninsula provides a dramatic panorama. The Ring of Brodgar is the ideal start or end point for a tour of this landscape. It’s a site that demands demarcation.

And this is its hidden history. For centuries, pilgrims and passersby have felt moved to own historic sites by carving their names into walls and monoliths. Walk the Ring of Brodgar and you are witness to the signatures of a vast visitor’s book. Look closely and you’ll see layer upon layer, a palimpsest of names and dates obscuring each other. 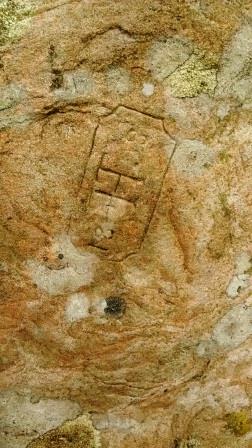 Much of the graffiti here dates from the second half of the 19th century. This is significantly later than the medieval carvings you might spot in English churches, or the chiselled names of Georgian visitors to Avebury or Stonehenge.

Does this point to the obscurity of the site as a visitor attraction? Perhaps. But monumental graffiti can also tell us something about the literacy of local people. When free schooling reached Orkney after the 1872 Education Act, any would-be local graffitist stood a better chance of shaping their letters.

Counting clockwise from the north western entrance, find the third standing stone. Hidden amongst the Orcadian family names, and the initials of Victorian sightseers following in the footsteps of Sir Walter Scott, is a cryptic inscription. Carved into the stone is a group of Norse runes. Known as the twig-runes because of their twig like appearance, they defy accurate translation.

Norwegian scholar Magnus Olsen offered his translation of the inscription as “Bjorn”.

Was Bjorn the Viking here? Was he an early heritage sightseer, drawn by the mysterious henge? Was he so moved by the site that he just had to sign his name here?

It’s certainly tempting to think so.

Be a better tourist than Bjorn

The volume of visitors in recent years has damaged footpaths leading to and around the stone circle. Combined with Orkney’s infamous weather, tunnelling rabbits and essential conservation work, erosion of the site is an ongoing issue.

By keeping to the new elevated footpath you can help to protect the archaeological heritage underfoot. And however calligraphic your hand, please don’t add your name on the stones.

The Ring of Brodgar is an iconic stop for tourists in Orkney’s West Mainland. It is part of a vast World Heritage Site, ‘the Heart of Neolithic Orkney’.

Stand here and you are surrounded by ancient mounds, burials, architectural complexes and curious sites of prehistoric activity.

To the northwest is the great earthwork the ring of Bookan, a flattened, oval henge like a giant button on the landscape, the remnant of a stone setting in its centre.

To the southeast are the vertiginous Standing Stones of Stenness: angled pillars, thin flakes and bending slabs of rock, overseen by the sentinel Watch stone.

Beyond these is the enigmatic bump of Maeshowe, a chambered cairn with circular ditch and raised bank.

How have past pilgrims made their mark here? Click to reveal the answer

Sonia Overall for writing and photographing the viewpoint.  Sonia is a lecturer in Creative & Professional Writing at Canterbury Christ Church University and founder of Women who Walk.

Like snowflakes or fingerprints, no two circles in Britain are the same

Why is a remote Orkneys island one of naturalist Mark Cocker's favourite places?

A view of Scottish salmon farming

Find more ancient graffiti on the coast of Oban

Explore more iconic stones in the wild landscape of Dartmoor