What makes Braemar in Aberdeenshire such a record breaker?

The answer is that great British obsession - the weather.

Braemar holds the record for the lowest ever UK temperature – it has reached - 27.2 °C twice, in 1895 and 1982. Whenever cold weather is predicted, meteorologists turn their attention to the weather station here at Braemar, as it’s usually colder than any other lowland station.

But it’s not just cold temperatures that have made Braemar a record breaker.  On 30 September 2015 it registered as one of the warmest places in the UK recording an unseasonably warm temperature of 24.0 °C. Yet the same day it was also the coldest place in the UK at -1.3 °C. The very next day (1 October) it was again the coldest and warmest place, meaning that for two months in a row Braemar recorded the warmest AND coldest monthly temperatures for the UK!

So how can we explain this strange phenomenon?

The reason is down to its geography. Braemar is relatively high at 339 metres above sea level (just 128 metres shy of being the highest village in the UK), and is flanked on four sides by mountains. The village is overlooked by Carn na Drochaide (818 metres high), Creag Choinneach (538 metres), Carn na Sgliat (690 metres), and Morrone (859 metres). So, no matter which way the wind is blowing, cold air from the mountaintops gets funnelled down the mountainsides into the heart of the village, vastly reducing the temperature there. 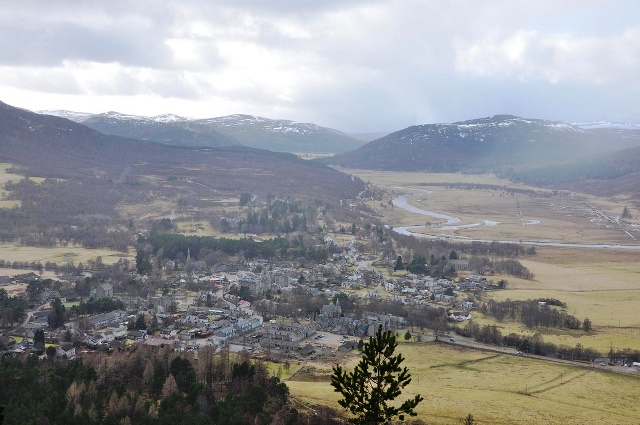 As Braemar is effectively at the centre of a large bowl, a cumulative temperature effect occurs. Cold dense air masses roll into the village and, unable to escape over the surrounding mountains, keep the temperature artificially lower than it otherwise would be.

But, when the air is still and the sun is shining, the opposite effect occurs. Heat gets concentrated into a small space by the surrounding mountains. It is as if a giant magnifying glass has been placed over the village, warming it beyond what temperatures would be reached otherwise in this Alpine-esque place.

When the stars align and the two phenomena occur in the same day, Braemar can be both very warm and very cold in the same 24 hours. And when this occurs twice in two days, as was the case in September and October 2015, Braemar gets to bag four monthly temperature records in the space of just two days!

It’s hardly any wonder then that meteorologists and reporters always have one eye on Braemar when Britain is exceptionally warm or especially cold.

With a population of less than a thousand, the small village of Braemar on the edge of the Scottish Highlands in rural Aberdeenshire isn’t the sort of place you would imagine making too many headlines or breaking many records.

But every few years, Braemar finds itself front-page news in several national newspapers.

What makes Braemar in Aberdeenshire such a record breaker? Click to reveal the answer

Caroline Millar for edits to the text

“But who wants to be foretold the weather? It is bad enough when it comes, without our having the misery of knowing about it beforehand.” - Jerome K. Jerome, Three Men in a Boat

The most loved hill in Britain?

Discover the secrets of Bennachie in Aberdeenshire

Looking into the abyss of time

Discover the unique weather of the North Pennines