How did a collapsed crater become Britain's highest mountain?

Around  400 million years ago, the rocks that form the area around Ben Nevis were part of a chamber of molten rock in the upper layers of earth’s crust. The heat and pressure baked the surrounding crustal rocks into schists and domed them up. Volcanic eruptions, in this area, added layers of lavas on top.

As the hot magma chamber cooled and contracted, its domed roof collapsed, forming a large crater – called the Ben Nevis caldera – some 2 km in diameter.  The rocks that now form the top of Ben Nevis were at the bottom of this crater!

So how did they end up as the highest land in Britain?

First, all of this geological activity was happening at the time of massive mountain building forces in the earth’s crust that bound these rocks into a chain of ancient mountains, similar to the Himalayas today, across northern Scotland and other surrounding land. 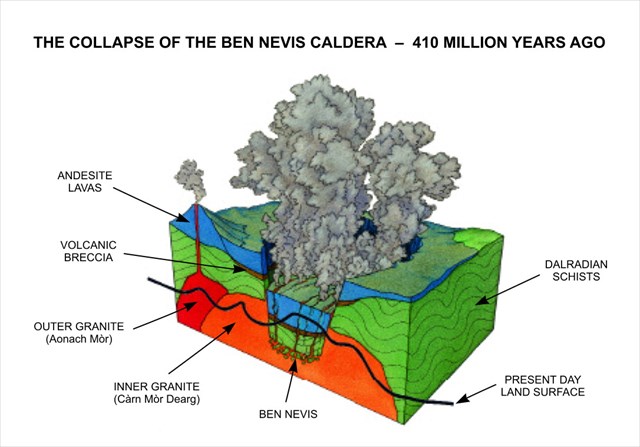 From the bottom to the top

Then there is the hundreds of millions of years of slow but steady wearing away of the surrounding and overlying rocks by erosion. It is nature’s natural sandpaper that operates on all land, slowly and inexorably wearing it down by wind, water, ice, chemical changes and the force of gravity.

At times, too in this long geological history, a sea covered large parts of the Highlands, which also helped to erode the rock.

The final, and most important, sculpting of the highlands, to create the landscape we see today, took place over the past 2.5 million years. This was as northern Britain was repeatedly covered by large ice sheets and valleys scoured by glaciers, in the Ice Age. There were around 20 phases of glaciation, each lasting on average around 75,000 years, each separated by several thousand years of warmer weather, like today, when rivers continued the relentless erosion.

If you climbed to the top of Ben Nevis now, you would be standing on the highest point in Britain, BUT you would also be standing much lower than the height of the collapsed crater all those millions of years ago! 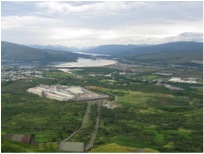 Look just to the left of the white lock keepers house and you will see two large sets of pipes running down the side of Ben Nevis.  These transport water, to generate electricity for the local aluminium smelter.

The smelter extracts aluminium from the rocks it naturally occurs in, and this is then used to create a host of products from ships and cars to foil for food.

The pipes are part of a 16-mile network of tunnels, which bring water to the town of Fort William.

Imagine the feat of engineering it took to construct these tunnels up Britain’s highest mountain! It was worth it however because aluminium smelting requires a huge amount of electricity, and running the water down the steep mountainsides creates plenty of power to drive the turbines and produce the required electricity.

From our loch-shore viewpoint, the snow-dusted shoulders of this imposing mass stand clear of the surrounding peaks.

Once, however, the top of Ben Nevis was actually the bottom of a large crater, and one of the lower bits of land in this mountain range!

How did a collapsed crater become Britain's highest mountain? Click to reveal the answer

Clive Turner for permission to use his photograph

Read me a lesson, Muse, and speak it loud
Upon the top of Nevis, blind in mist!
I look into the chasms, and a shroud
Vapurous doth hide them - just so much I wist
Mankind do know of hell
- John Keats