Standing at this point in Glen Roy a curious feature becomes apparent. See if you can make out three lines etched into both sides of the valley.

Notice how the lines run in parallel, and are sometimes distinct while at other times they fade into the slope.

This trail investigates how the lines came to be here and why this was the site for Charles Darwin’s ‘gigantic blunder’.

From the car park look for a grassy path and follow it straight up the hillside until you reach a distinct ridge (just above a solitary tree).

Look along the ridge you have just climbed onto: it stretches out to both sides forming a ledge along the hillside of about 2 metres wide.

This ledge is one of the ‘Parallel Roads of Glen Roy’. If we had been standing here during the last Ice Age, a great loch (lake) would be lapping at our feet and your car would be underwater!

So why was the landscape so different, and why is this ledge here today?

Around 12,500 years ago, the climate became extremely cold and an ice-field (an expanse of ice) developed to the west of Glen Roy. Glaciers spread eastwards along the glens (valleys) until one blocked the end of Glen Roy and joined with another glacier blocking the end of Glen Spean, just to the east. Together these glaciers acted as a dam, trapping icy water inside Glen Roy and creating a large loch. This loch stretched as far up the valley as you can see, filling it to a height of 260 metres, which is where we are standing at now. The loch remained at 260m high because any extra water escaped through a low-point between two hills (a coll). 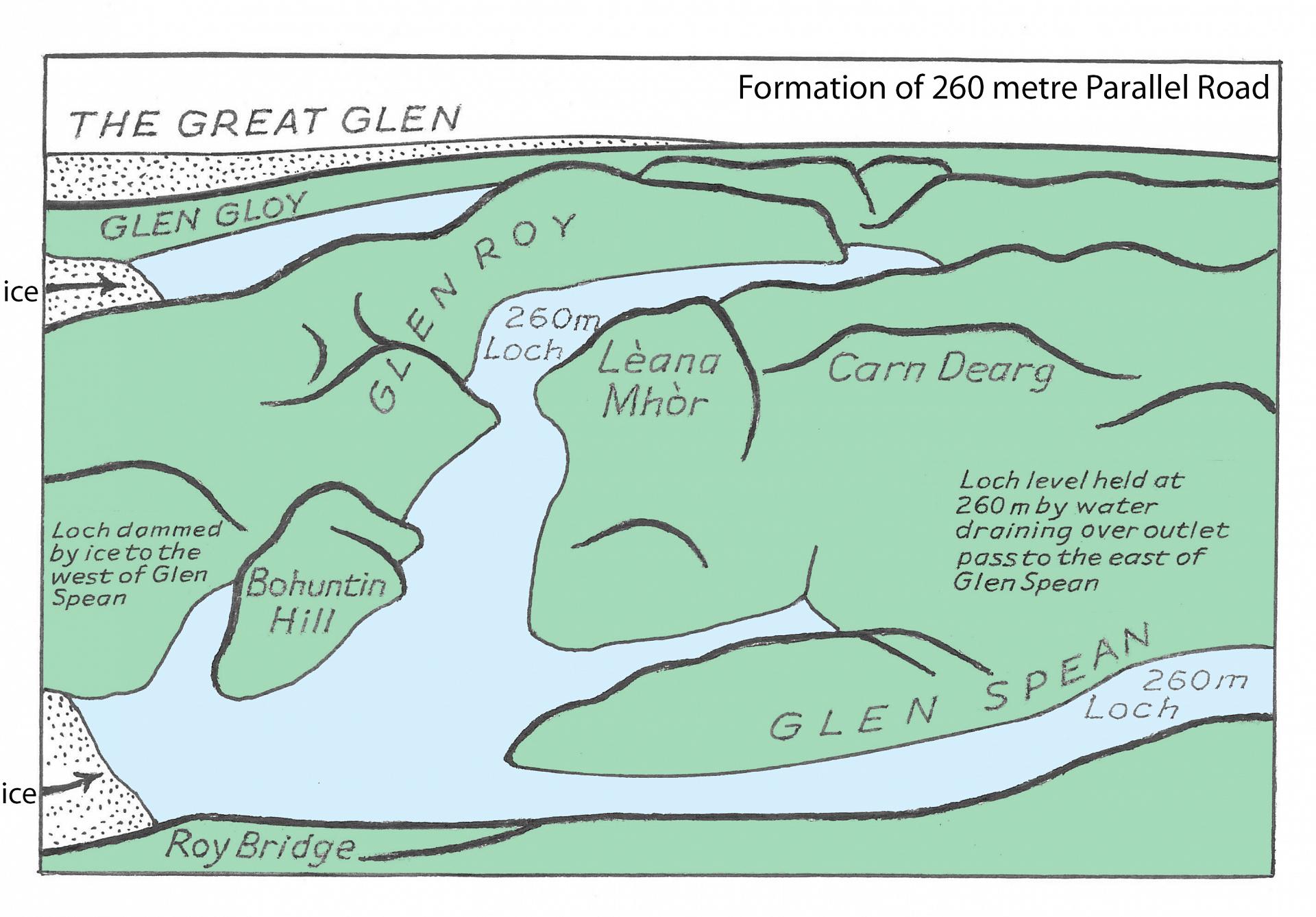 Such a big loch produced its own waves; they lapped at the hillsides and gradually carved out a beach. The continual freezing and thawing of water at the loch’s edge, which helped break up the rocks, aided this process. It is the remains of this beach that we are standing on now, and this is the lowest of the three lines we can see along the side of the glen.

Continue straight up the hill until you reach a second ledge

It is probably not a surprise to learn that this second ledge is the second of the Parallel Roads, and it was also a former beach of the ice-dammed loch.

100 to 200 years after the loch was created, the temperature in the region dropped. More ice was formed and so the glacier extended further up Glen Roy. The extending glacier blocked off the water’s escape route, so the height of the loch rose, this time to 325m, which is where we are standing now. The loch could not get any deeper than this because extra water drained away into Glen Spean through a pass. 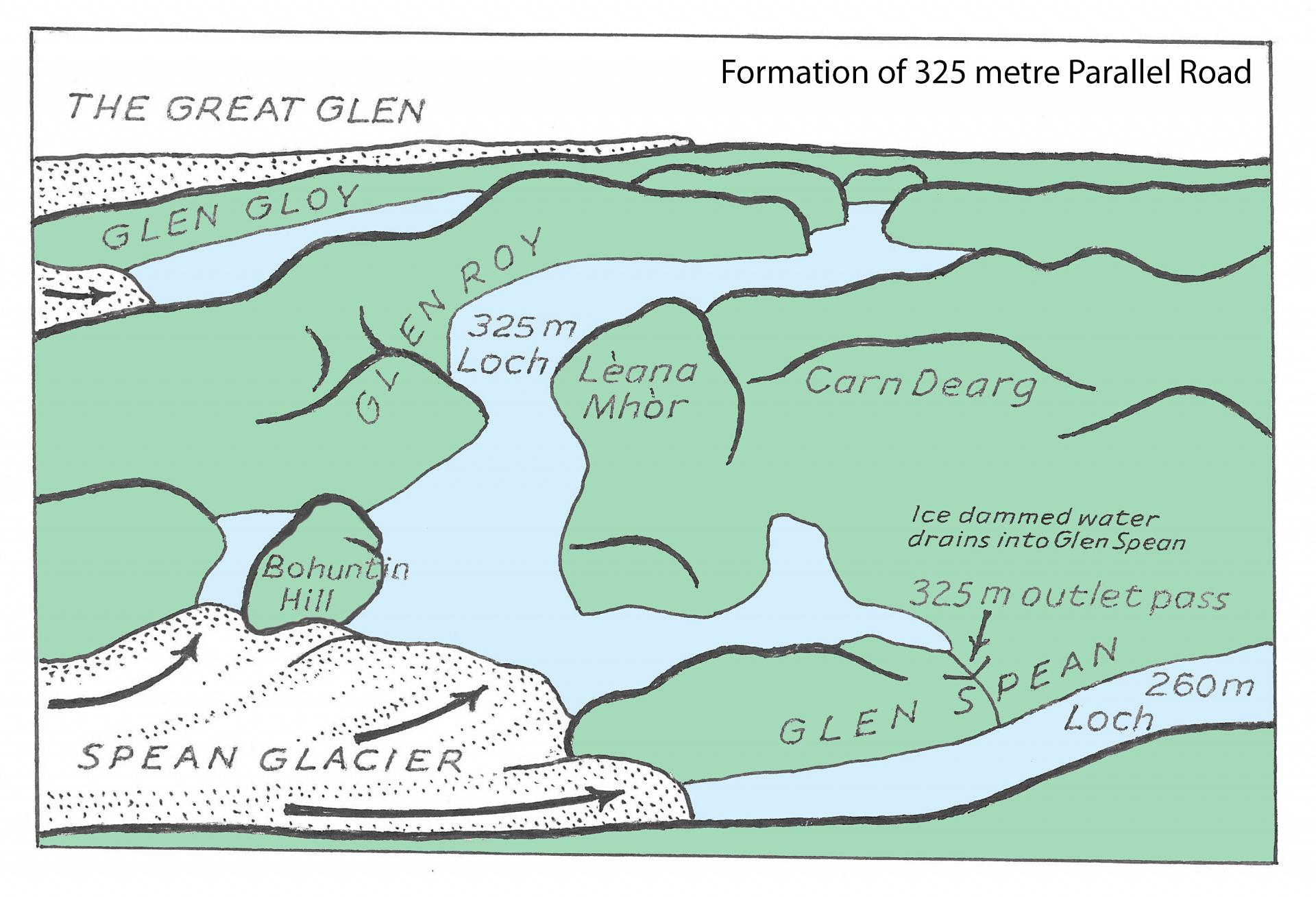 If you look up you may be able to see the lip of a third ledge in the hillside 25m above. This is the third of the Parallel Roads. You can see all three of them clearly if you look to the opposite side of the Glen.

You can probably guess why the third ledge is there! After another 100 or so years the temperatures dropped again and the glacier crept even further up Glen Roy, blocking off the pass that allowed extra water to drain away. The loch could now fill the Glen to a height of 350m and a final new beach was carved here. 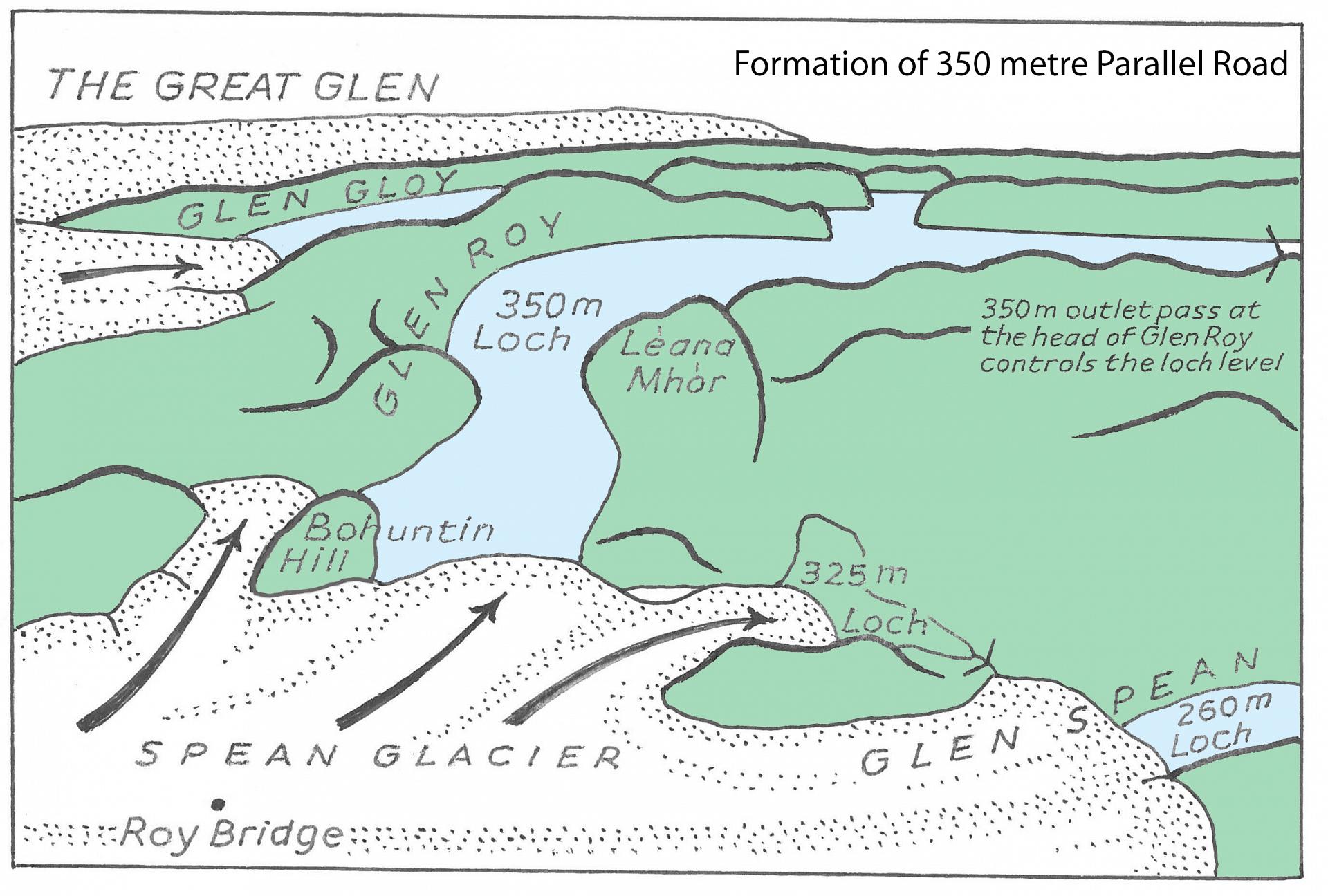 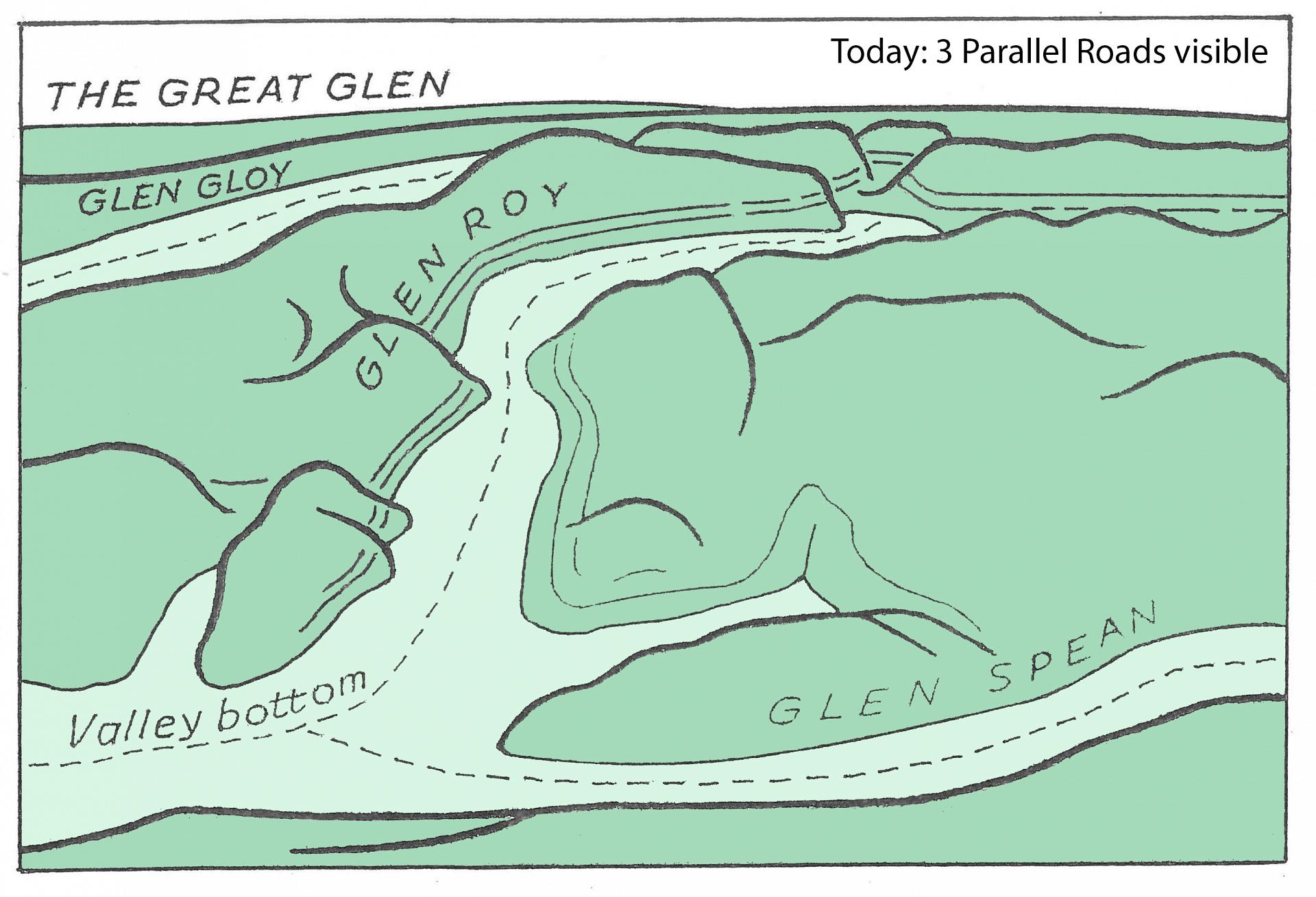 Facing uphill turn right and walk along the second Parallel Road, following it for 300 metres as it contours around the hill (Beinn a’ Mhonicag). Stop where you meet a small stream (or set of tiny streams) crossing your path (these streams go on to become Allt Criche if you are looking at a map).

As you pick your way across this small stream, can you guess what might have happened to the mighty loch that once filled this Glen?

Around 11,500 years ago the climate finally started to warm up, and the glacier began to melt. However, this is not a story of a gradual decline, what happened here is much more dramatic.

As the glacier melted, cracks opened up in the ice and water started leaking underneath it. As ice is less dense than water, once the glacier had shrunk a little, it bobbed up to the top of the loch, like an ice cube dropped in a glass of water. The water then rushed under the ice to escape in a huge torrent. Where this has happened in more recent times, scientists have recorded the process taking only a matter of hours! For this reason the phenomenon is known as a glacier burst.

Continue along the Parallel Road as it contours around the hillside. Sometimes the Road is less distinct, so just remain at the same height and walk for 750m. About half way along you pass over the remains of a low stone wall, which runs up the hillside to a rocky crag, and later you cross another stream.

As you walk along note how hummocky the land is in the bottom of the Glen.

Continue along the Road until it begins to bend off to the left around the hillside. Before you turn fully left (west), look down the slope ahead of you (north) and you will see a small stone enclosure with a clear footpath just below it. Leave the Parallel Road here and walk down the hillside to join the footpath.

So far on this trail we have explored the marks left by ice on the landscape and imagined just how different this place once looked.

But what has this got to do with Charles Darwin?

The Parallel Roads puzzled people for centuries. According to local legend the lines were created by Fionn MacCumhail, or Fingal the Giant, a mythical Celtic warrior-king. The glen used to be heavily wooded, so Fingal built a set of roads through the forest so he could hunt deer from horseback. The marks on the mountainside were thought to be the remains of these roads.

In the 19th Century a number of scientists and geologists, including Charles Darwin, were determined to find a more logical answer for the Parallel Roads. Darwin believed the sea must have reached further inland than it does today, so argued the Roads were ancient shorelines. However, no seashells or marine remains could be found to support his theory.

It was not until 1840 that a Swiss geologist, called Louis Agassiz, proposed the correct answer. Having lived near the Alps and studied the glaciers there, Agassiz realised that a glacier could have acted as a dam across the valley, trapping in water and forming a large loch. He argued the waves of the loch could have carved out beaches, which would explain the Roads.

Other scientists drew on Agassiz’s theory to work out that if the glacier had grown, it would have deepened the lake and so created beaches at different heights. Darwin was so cross with himself for getting this wrong that in 1861 he wrote to a friend:

But perhaps he should not have been so hard on himself. Piecing together the past from the remains left in the landscape is not easy; even today theories are refined and new discoveries emerge.

Upon reaching the footpath turn right and follow it downhill until it joins the road. Turn right again and follow the road (taking care to watch for cars) until you reach a small wooden footbridge where the road crosses a stream

From the road we have a good view up and down Glen Roy. Notice how wide the valley bottom is, with plenty of space for trees to cluster around the river and sheep to graze the grassland. This is a classic ‘U-shaped’ valley with a flat bottom and steep, straight sides like the letter U.

The valley shape tells us that it was formed by glaciers and not by the River Roy, which flows through the Glen today. The ice of a glacier is powerful enough to scrape out the valley, leaving a wide bottom. A river on its own can only carve a narrow channel, so would have left a much narrower valley bottom. Valleys carved by rivers are called ‘V-shaped’ valleys because their pinched profile is more like the letter V.

There is another clue that glaciers must have shaped this valley. From higher up we saw how hummocky the valley bottom is (and you can still see the undulations here). The lumps in the ground are in fact piles of sand and stones dropped by the glacier as it melted and retreated down the valley. These materials are now overgrown with plants but their distinctive shape remains. 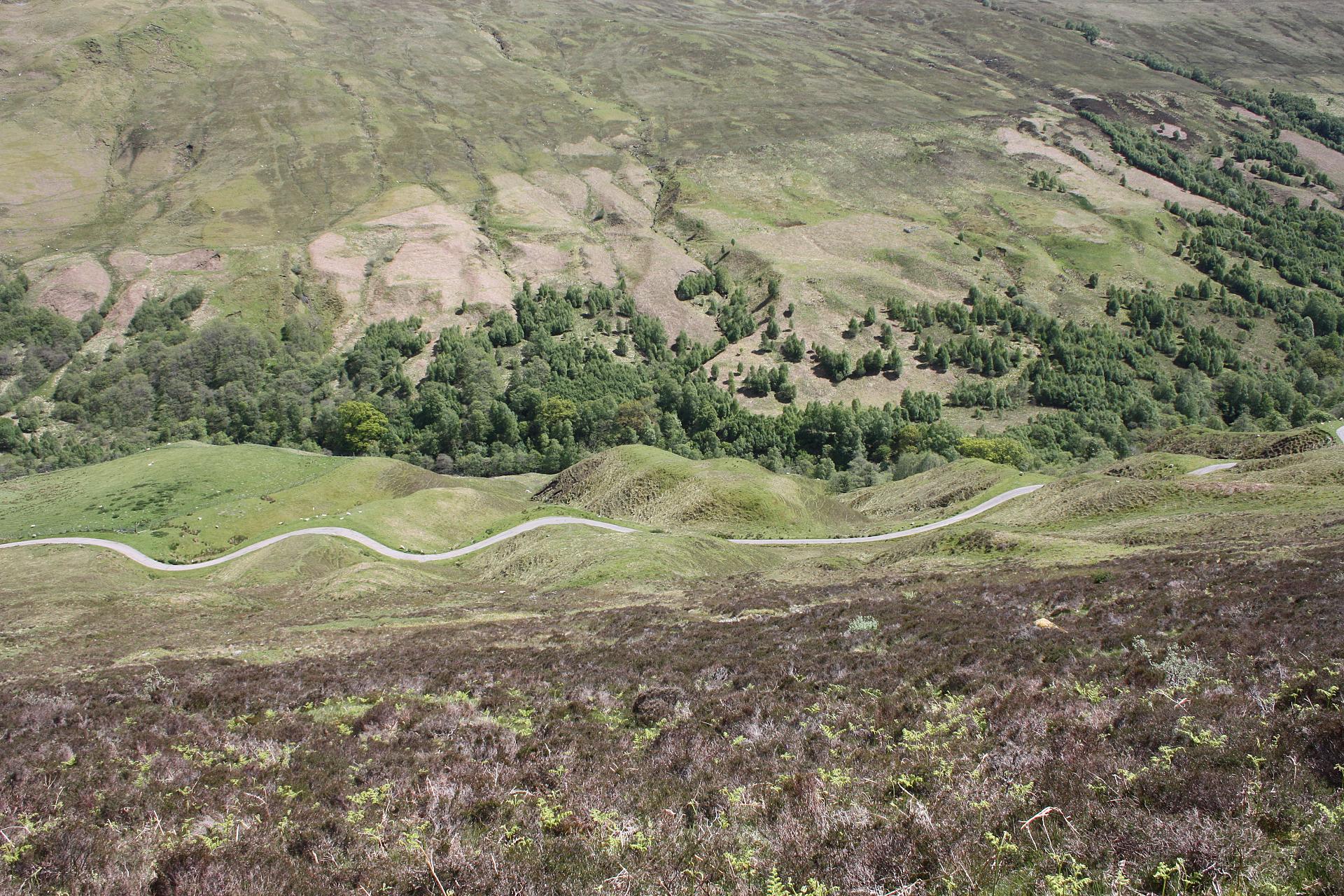 From lines to lumps, we have explored a number of strange features in this landscape. While it can be hard to work out the precise details of their formation, these features are all clues that ice has played a key role here.

Next time you are out in the hills, keep an eye out for hummocks and valleys with wide flat bottoms and steep sides. You will know you are in a landscape shaped by ice.

The parallel roads, on the other hand, are a much rarer feature, which is why they caused Darwin such a headache. In fact, you won’t find such markings on the landscape anywhere else in Britain - so we hope you have enjoyed the opportunity to explore them today.

Continue along the road all the way back to the viewpoint and car park we started from.

A short walk on the 'parallel roads' of Glen Roy

Standing at this point in Glen Roy a curious feature becomes apparent. See if you can make out three lines etched into both sides of the valley.

Notice how the lines run in parallel, and are sometimes distinct while at other times they fade into the slope.

This trail investigates how the lines came to be here and why this was the site for Charles Darwin’s "gigantic blunder".

Helen Rawling for creating this trail

Ted Hatch for drawing the diagrams