Before we investigate the secret of the islands, take a moment to enjoy the peaceful woodlands we are walking through. This is the Queen Elizabeth Forest Park, part of the larger Loch Lomond and Trossachs National Park.

You may have noticed that many of the trees here are oaks; this is thanks to the third Duke of Montrose who, in the 18th century, planted the oak woods that cover the eastern side of Loch Lomond. 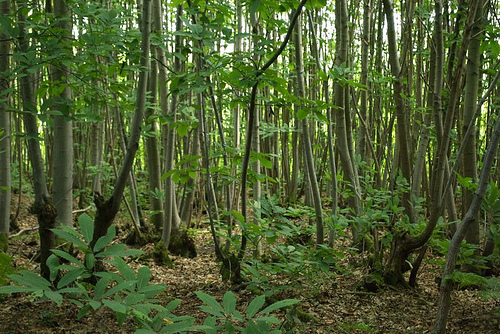 While quiet now, each spring this area was once a hive of activity, with women and children coppicing oak trees and stripping the bark. ‘Coppicing’ involves cutting back large branches then harvesting the young, straight shoots that grow in their place. These were used for building and charcoal making.

Charcoal making produced wood vinegar and this was also distilled and used to fix dyes in the textile factories of the Vale of Leven (between Loch Lomond and the River Clyde). These woods were important to many livelihoods and supported several industries.

Today they are a Site of Special Scientific Interest because they provide habitats for a variety of plants and animals, including red squirrels. In fact, one old oak tree can support 600 different species of life!

Where the path forks take the left hand track, following the West Highland Way through the woods. Continue as the path heads uphill, the terrain comprising steps, mud and rocky paths. Pass through a gate, climb more steps and cross a stream.

Approximately 10 metres after the stream you will see a faint path tracking uphill, taking on the nose of Conic Hill (this path is not marked on the map). Turn right to leave the main track and follow this path, using your hands if needed to scramble uphill. Don’t forget to look back every now and again to enjoy the view over Loch Lomond. Stop when you reach a false summit.

Turn away from the path and look out across the Loch to notice a curious phenomenon.

The islands directly below the ridge we are walking up appear to line up neatly, one after the other like emeralds strung along a necklace.

From nearest to furthest we are looking at the islands of Inchcailloch, Torrinch, Creinch and Inchmurrin. You can imagine a line connecting them, and then running right up the ridge, under our feet, and away over the hill top behind us. And in fact, just such a line exists! 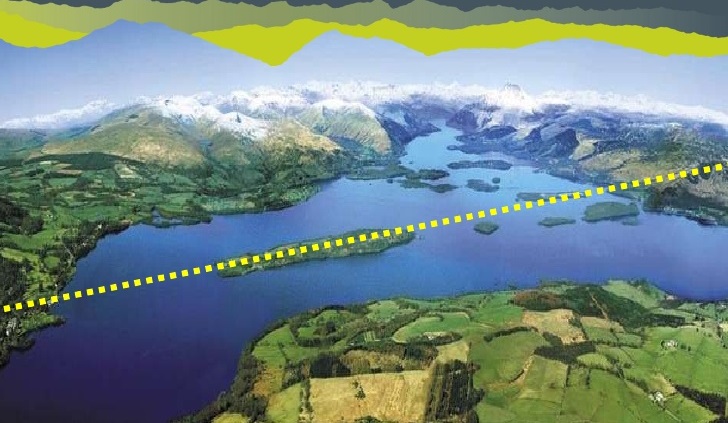 We are standing on what’s known as the Highland Boundary Fault. A fault is a crack in the Earth’s crust, essentially a break in the rock. The fault we are standing on runs right across Scotland from the Isle of Arran and Helensburgh in the west to Stonehaven, Aberdeenshire, in the north east. The islands and ridge we are standing on mark the line of the fault.

So why is there such a massive crack running across Scotland?

Until 410 million years ago the land we now know as Scotland was separated from England by the Iapetus Ocean, which was larger than the Atlantic. Over time the two land masses drifted together, the ocean closed up, and the subsequent collision of land pushed up a mountain range as large as the Himalayas! 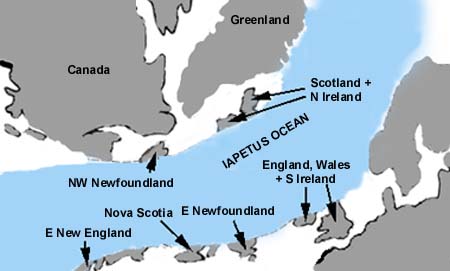 When rocks are pushed together like this they often fold into waves, with anticlines (or up-folds) and synclines (or down-folds) creating mountains and valleys. One of these folds cracked under the strain. This split became the Highland Boundary Fault Line. 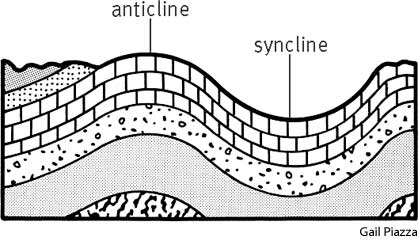 The Highland Boundary Fault essentially separates Scotland’s rugged, mountainous Highlands from the rolling hills of the Midland Valley. The Midland Valley or Central Lowlands is an area of relatively low-lying land in Central Scotland. It includes the cities of Glasgow, Stirling, Edinburgh and Dundee, as well as the Ochil Hills and Campsie Fells. When the Highland Boundary Fault was created the land to the south of it dropped as much as 4000 metres forming this lowland region or rift valley. 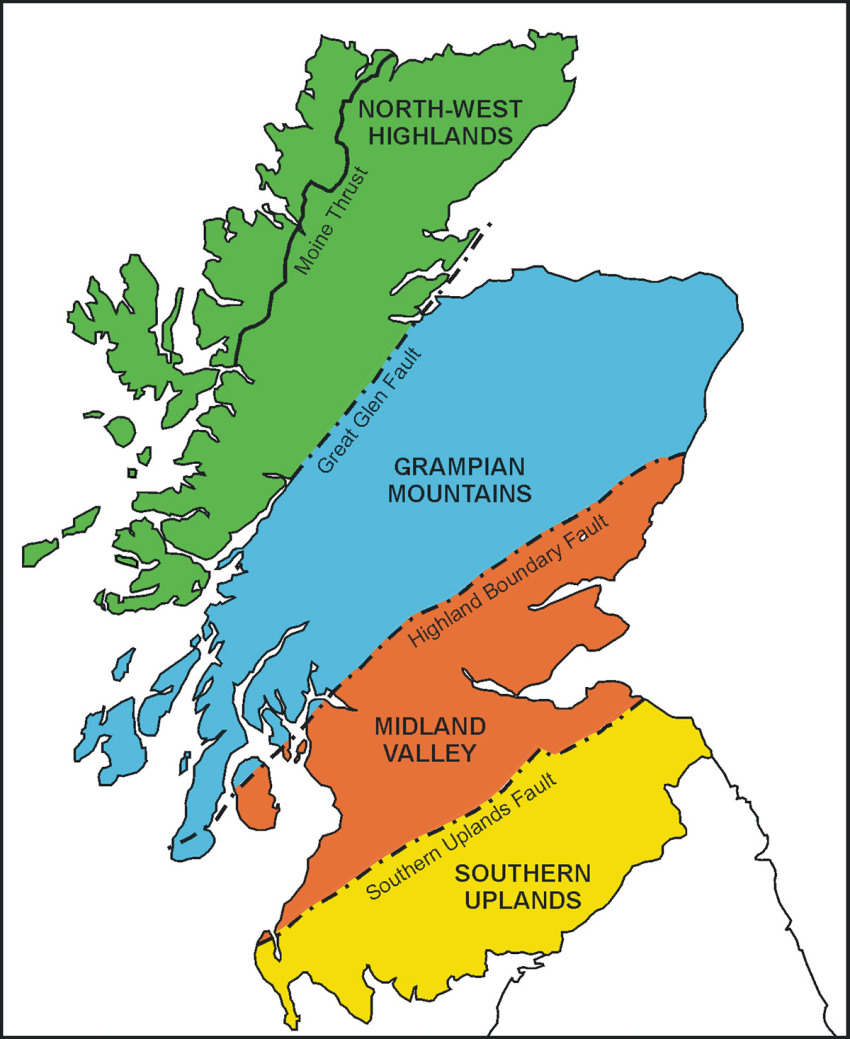 As we climb we’ll find out more about the differences either side of this dividing line.

Continue along the path, descending into some boggy ground before heading up to the true summit of Conic Hill.

Celebrate reaching the top by turning through 360 degrees to take in the (literally) breath-taking views.

If you are lucky, the waters of Loch Lomond will be glistening at your feet. To the north (right when looking out over the Loch) the highest peak you can make out is Ben Lomond, the mostly southerly of the Munros. (A Munro is a Scottish mountain with a summit of more than 3,000 feet, named after the man who first listed them all).

In fact, it is no coincidence that the highest land around is off to our right. Land to the north of the Highland Boundary Fault tends to be more mountainous and wild. Look over to your left (south) and you should be able to see a mosaic of farm and woodland, with field boundaries, trees and a generally more intimate feel. This is because the different sides of the fault are made of different types of rock.

Before the two land masses collided (around 410 million years ago) England and Scotland were on different sides of an ocean and made of different rocks. When they collided and the massive mountain range was pushed up, molten magma was injected into the Earth’s crust where it cooled to form granite. During the formation of these mountains the rocks were subjected to immense heat and pressure creating a series of metamorphic rocks.

Millions of years of erosion by wind, water and ice followed until the Himalaya-like mountains were reduced to relative stumps. The rugged Highlands we see today are the hard granites and metamorphic rocks exposed at the surface. 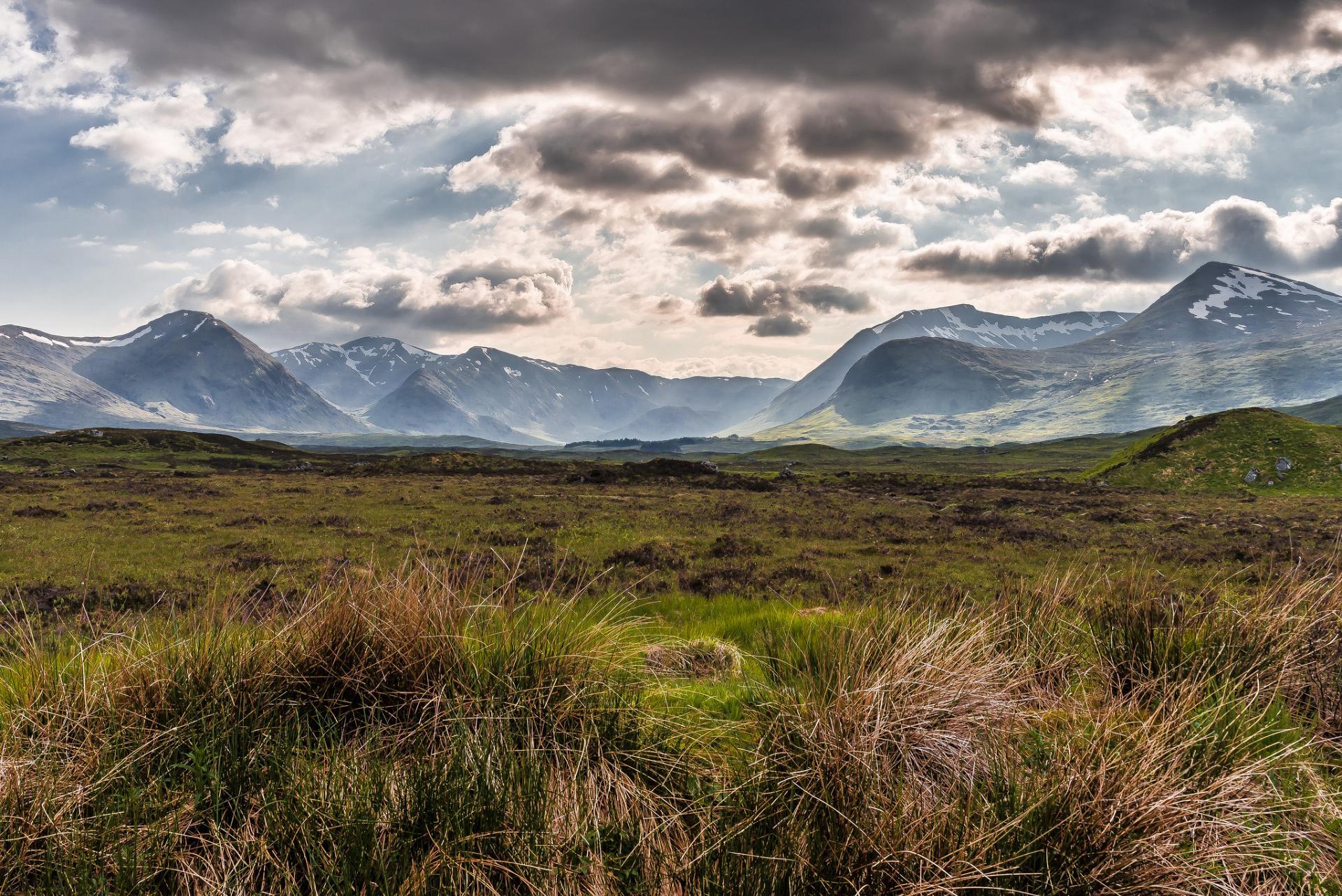 To the south of the Fault the rocks are softer sandstones and other sedimentary rocks. These formed from material deposited by rivers washing through the ancient mountain ranges. They have weathered to produce softer, rolling landscapes more capable of supporting farming and woodland. 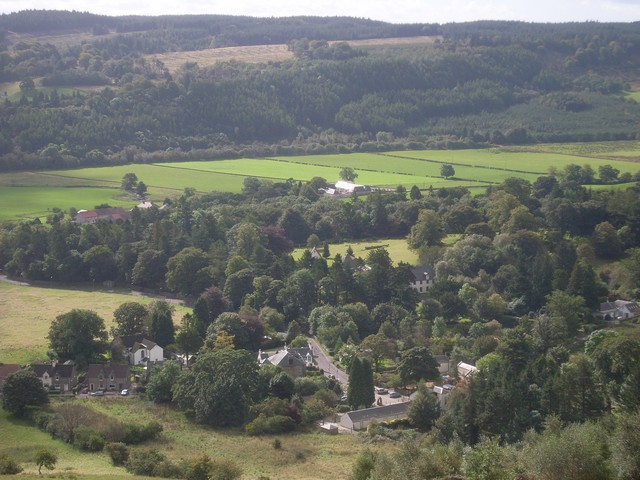 The different landscapes have been used in different ways over the centuries - so different cultures and lifestyles have historically been apparent on either side of the Highland Boundary Fault.

The Midland Valley, south of the fault, with gentle hills and fertile soil was good for farming. Typically, farmers worked the land, paying dues to the barons (landowners – many of them English) and ultimately the King. The mountainous Highlands to the north of the fault were used for crofting. This involved small plots of good land being used to grow food and the rougher land used for common grazing and foraging. Here the traditional clan system was retained for much longer than in the south. It was not until the mid-18th century and after the Battle of Culloden (1746) that the Government really made efforts to undermine the Scottish clan system and Gaelic culture.

Today, with many livelihoods less dependent on the land, and transport and technology opening up remoter areas of the country, life on either side of the fault is less divided.

Leave the summit by the much more distinct path that tracks steeply downhill, roughly west, then joins the West Highland Way. Follow this southwest until you meet a fork in the path.

As we descend towards Loch Lomond our eyes and thoughts return to the islands which hold the clue to the secret of the landscape.

The National Park Authority lists 22 islands and 27 islets within the 24-mile long Loch. Some are inhabited by people while others are the sole domain of wild birds and animals. The Isle of Bucinch literally means ‘island of goats’, so no prizes for guessing what species reigns there!

Take a look at a 1:25k OS map however and you’ll notice a few of the tiniest islands are marked ‘crannog’. Most of these are dotted close to the shore of the lake. There is one, for example, just south east of Inchcailloch Island. Crannogs are artificial islands, found in lakes and rivers in Scotland, Wales and Ireland. 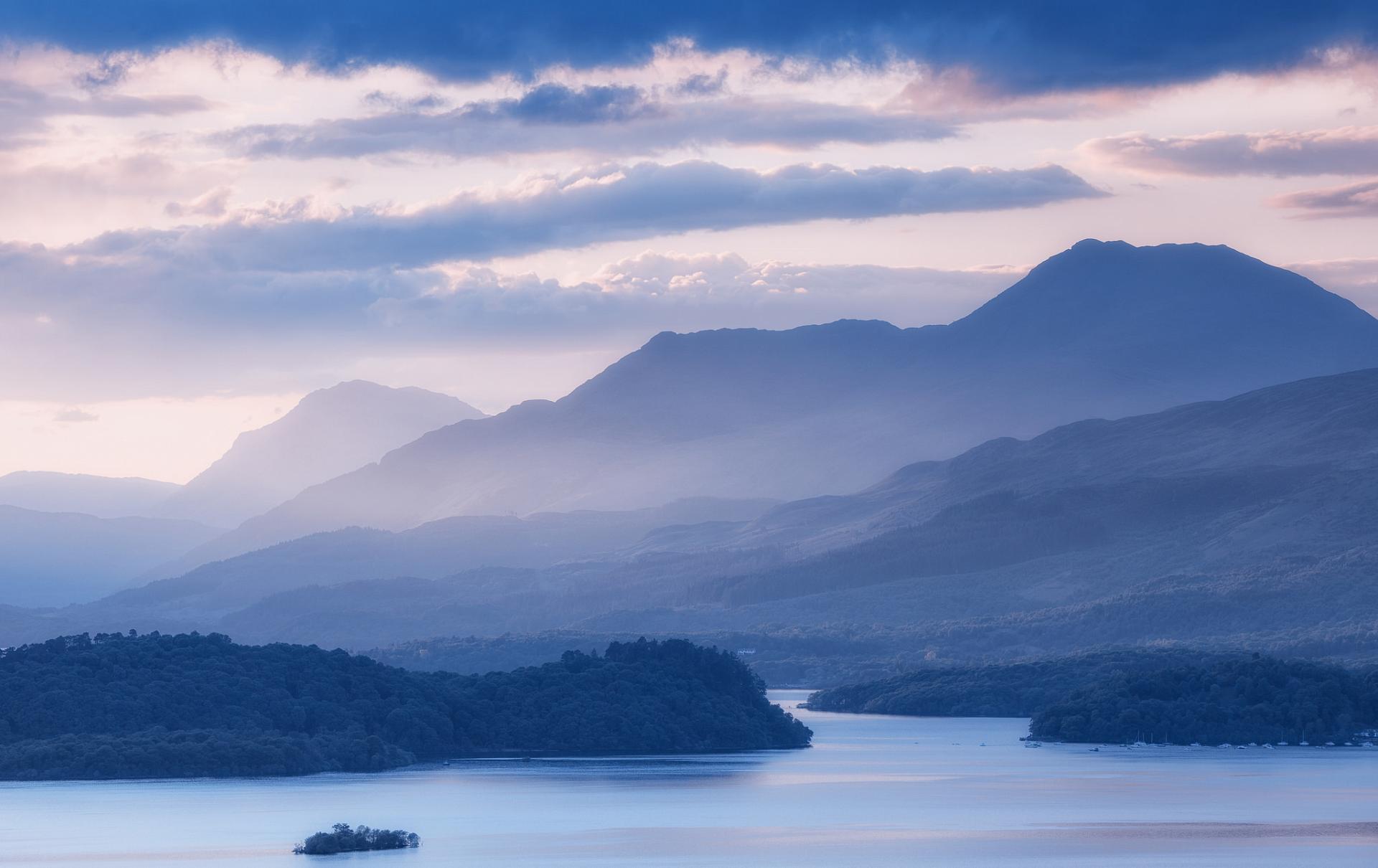 It can be hard to date these structures; but we know they were built at various points from Prehistoric to Medieval times. In Scotland, crannog construction seems to have peaked during the Iron Age (from about 750 BC to AD 42). They were made from whatever material was to hand – brush, wood or stone – and supported by timber piles. Some supported hut-like structures on top whilst others were just mini circular islands.

Crannogs were probably used as defensive homesteads or as the retreats of kings. However, some may have had a more symbolic or religious purpose. Either way they intrigue us to this day, particularly because they are relatively inaccessible unless you are a diver or own a boat!

Loch Lomond’s islands contain a multitude of secrets, but we can read their stories if we know how to find them. Perhaps the most fascinating tale is that of the Highland Boundary Fault. This line is so large that it runs right through the very heart of the country, and yet is rarely visible to the eye. A truly great divide.

[Find out about a crannog in Wales - see Stop 2]

At the fork in the path take the left fork (southeast – keep to the West Highland Way). Follow this until you reach the point where you originally left the uphill path just before Stop 2. Now simply retrace your steps downhill through the woodland back to the start (the route you came up on).

“What a large part of Loch Lomond's beauty is due to its islands, those beautiful green tangled islands, that lie like jewels upon its surface”…..

But Loch Lomond’s islands have more to offer than just a pretty view. If you know where to look, they can reveal a secret about the landscape.

From the top of Conic Hill we’ll discover a story that stretches back 400 million years, and crosses the country from west to east.

Climb with us to uncover the secret and revel in the breath-taking views….

Phoebe Smith for creating this trail, sharing the idea for the story and providing photographs

Phoebe is an award-winning travel writer, photographer and presenter specialising in adventure, travel, camping, gear and the outdoors (http://www.phoebe-smith.com/). This trail is adapted from her book Britain's Best Small Hills published by Bradt Travel Guides Ltd in 2017.

Andrew Magee for the lead photograph of the view from Conic Hill used via Flickr under CC BY-NC-ND 2.0 (cropped from original)

Why did a local poet write a lament for this beauty spot below the Campsie Fells?

Discover how Falkirk links the east and west of Scotland