Why is the Beetham Tower so noisy - and what do its sounds tell us?

Humming. Howling. Whistling. Shrieking. All these words and more have described the Beetham Tower’s eerie signature tune. Although the noise comes and goes, it can carry for up for to 2 miles and irritates countless people within earshot.

Experts have analysed the noise being 245-260 hertz, about the same frequency as a Middle C note on a piano. Look up to the roof and we can see the source. The building is topped by a large fin-like sculpture made of glass panels. The noise happens when high winds make this sculpture vibrate.

Sound is caused by objects vibrating in air. You can try this out by blowing across the top of a glass bottle or running a wet finger around the rim of a wine glass. In each case, sounds come from air pressure making the glass vibrate.

At the Beetham Tower this happens when winds reach around 30mph. Then the roof sculpture creates ‘turbulence’ - violent or unsteady air movement. The turbulent air vibrates rapidly between the glass panes, which act like an amplifier. Musical instruments like flutes and chimes work in a similar way.

Sound affects
The Beetham Tower’s song may seem quirky but it raises serious issues. One is noise pollution. Many people find the sounds disruptive, especially at night. The troublesome roof sculpture remains as it doubles as a lightning conductor. Failed attempts to stop the noise include fitting it with foam pads to reduce vibration.

Besides noise, skyscrapers pose other problems. Some are specific - like the curved glass in London’s ‘Walkie Talkie’ tower that pointed the sun’s rays towards the street, damaging parked cars. Others are commoner issues - including urban light pollution and challenges of emergency evacuation.

There are social effects too. Buildings like the Beetham Tower and the Shard are symbols of luxury. Yet other towers signify poverty and deprivation. When Britain’s bomb-damaged cities were rebuilt after the Second World War, many people were rehoused in tower block estates. Communities were broken up and places fell into decline.

Some fear Britain’s new skyscrapers may create similar divisions. Do such buildings illustrate wealth or a wealth gap? Housing demand or a severe shortage? The Beetham Tower was built for £150 million but its windy wail could be a wake-up call of greater costs. 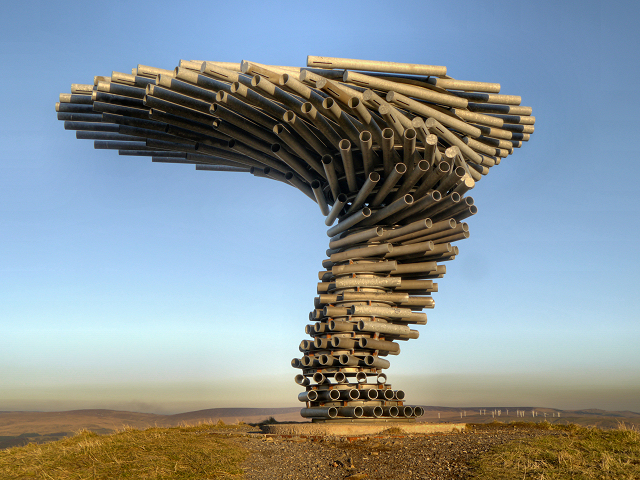 While the Beetham Tower’s sculpture produces accidental sounds, another one nearby is deliberately noisy. The Singing Ringing Tree is a 3-metre tall artwork on the Pennines, at Crown Point near Burnley. It’s made from dozens of steel pipes which create notes in the wind.

Sounds produced by the wind are called ‘Aeolian’. Aeolus is the ruler of the winds in ancient Greek mythology. Besides buildings, Aeolian sounds can be made by other objects and even natural landscape features like cracks in cliffs.

The Tree and the Tower were both unveiled in 2006. While the Beetham Tower has caused controversy, the Singing Ringing Tree is a popular visitor landmark. In 2015 a public poll for The Independent included it in a list of ‘21 British Icons for the 21st Century’.

At 554 feet (169 metres), Manchester's Beetham Tower is Britain’s tallest building outside London. On clear days it’s visible from 10 counties, while apartments inside offer views over the Pennines, Peak District and Snowdonia.

The building’s looks divide opinion. For some people it’s an exciting symbol of modern Manchester, for others an overpowering blot on the city’s heritage. But the Tower is also infamous for another reason.

In strong winds the building makes a startling noise. Locals have compared it to alien spaceships landing or a giant baby having a tantrum.

Why is the Beetham Tower so noisy - and what do its sounds tell us? Click to reveal the answer

Jo Kemp and Caroline Millar for suggestions and edits

Explore the milk fields of Lancashire

The art of regeneration

Discover decades of redevelopment along the River Tyne in Gateshead

River-view flats in London can cost more than £22,000 per m² of floor space