Why has Beeston Crag been a refuge for our ancestors over the centuries?

It is clear from our viewpoint that Beeston Crag is a highly defendable site. It has high ground, but also stands distinct from neighbouring hills. The rest of the Cheshire Plain is relatively flat, so it is possible to see as far as the Welsh Mountains in the west and the Pennine Hills in the east from its summit.

These qualities made the Crag an ideal place for a castle - any would-be attackers would have been visible from a distance and then had to climb a steep slope, whichever direction they approached from. Ranulf de Blondeville, Sixth Earl of Chester, began building work here in the 1220s. Returning from the Crusades, he found the King’s viceroy confiscating lands from other wealthy men. So Ranulf’s castle was a show of strength and effort to cement his political position. 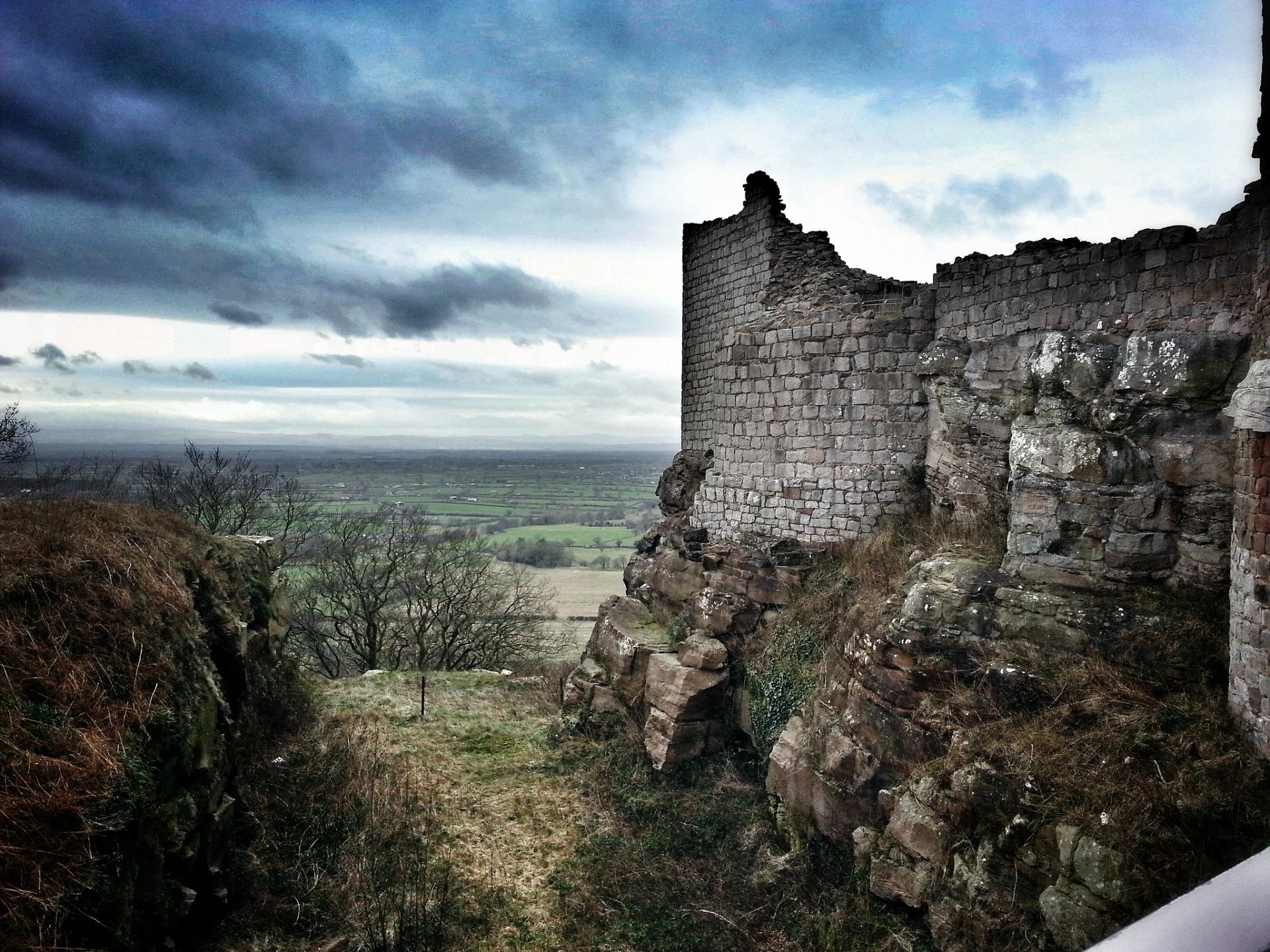 Ranulf had the local geology to thank for the advantageous features on his land. Beeston Crag actually forms part of Mid Cheshire Ridge  – a sandstone crest that flows for 34 miles across Cheshire’s flatlands, from Frodsham and Helsby in the north, to Malpas in the South. (See map; click to enlarge) 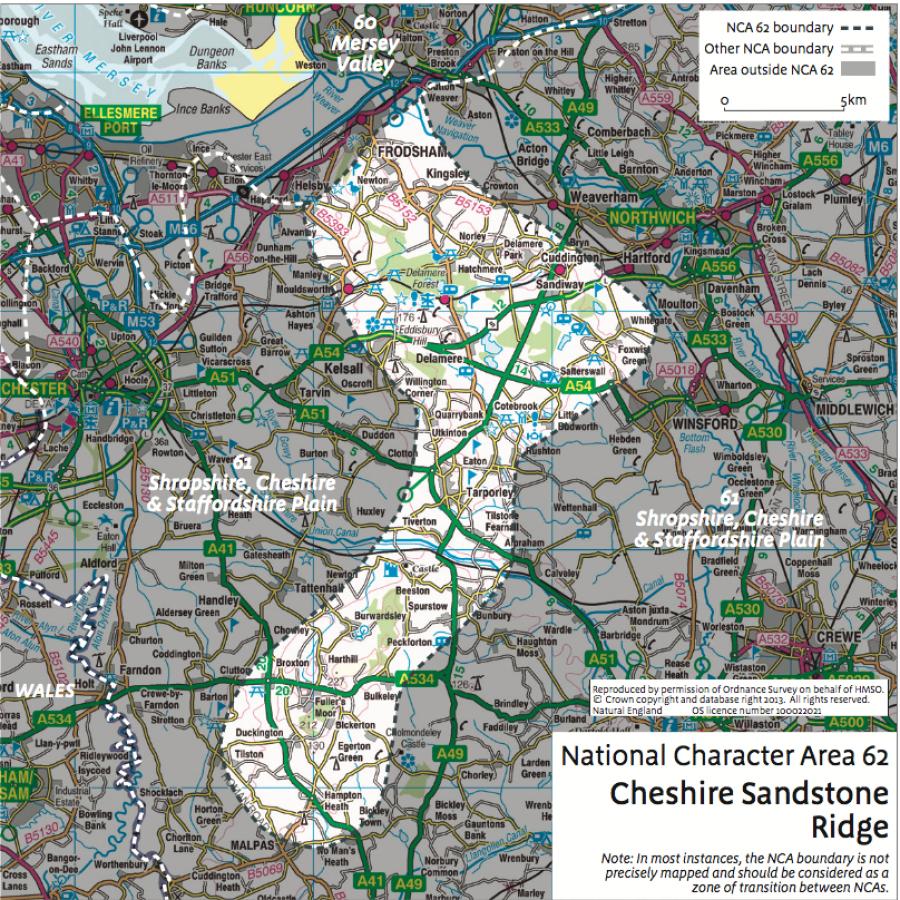 Rather than a continuous ridge, ‘the backbone of Cheshire’ is actually a series of rolling hills. The nickname ‘backbone’ is apt: with the hills forming rocky ‘vertebrae’ covered with a ‘skin’ of trees and grass. Beeston Crag is simply one vertebra in this chain.

The pink-red sandstone rock we can see exposed in the Crag (and forming the whole Mid Cheshire Ridge) was formed between 225 and 195 million years ago when layers of sand and pebbles were laid down in desert-like conditions. Over time, these layers were compressed together and formed into soft rocks. Later, upheavals in the Earth’s crust created vertical fractures (or faults) in the layers, which were then pushed upwards and tilted to create the ridge.

Over millennia, the uplifted rocks have been weathered by wind, water and ice to produce the cliffs, crags and scarps (steep slopes) we can see today. Now only the hardest bits of the sandstone protrude above the Cheshire Plain.

Following in the footsteps of our ancestors…

Ranulf de Blondeville wasn’t the first to spot the opportunities that the local landscape offered. The discovery of Neolithic (3,500-2,000 BC) flint arrowheads around the Crag suggests that prehistoric people recognised the ridge as a vantage point. The higher ground would have kept them out of the lowland marshes and forests, plus provided good views for hunting and spotting approaching enemies.

On the lower slopes of the Crag evidence of early Bronze Age settlement (2,000-1,500 BC) has been uncovered, including burial mounds. By the late Bronze Age it appears that a series of earthworks had been constructed and that the site had become a centre for metalworking.

During the Iron Age (650 BC – 40 AD) these earlier earthworks were added to, creating a hillfort with earth banks, wooden palisades and a ditch. Crops were processed and it appears that salt was traded from here. Central Cheshire has extensive underground salt deposits, formed when a warm shallow sea evaporated around the same time that the sandstone rocks were formed.

Beeston Crag’s high ground protected the people and industry developing here. But the hillfort was probably abandoned at the end of the Iron Age and remained largely unoccupied until Ranulf came to build his castle, several centuries later.  He actually used the hillfort as the foundations for the outer walls.

Ranulf kept hold of his land, but died not long after. The King seized his assets, including the castle, which then changed hands several times. During the English Civil War (1642-1651) it was fought over for its strategic location in the centre of Cheshire. When Parliamentarians had gained control of it in 1645 the castle was partly dismantled so it couldn’t be used in battle again.

From the end of the seventeenth century, the Crag and castle ruins became a playground for the wealthy. Romantic artists, including JMW Turner found inspiration here for their paintings and in 1840 landowner John Tollemache bought the estate, adding his own castle looking out at Beeston from the Peckforton Hills.

Today Beeston Castle is a tourist attraction managed by English Heritage. Do take a look around - it is not hard to see why it served as a place of refuge for so long. Indeed, this landscape’s advantages mean that there are the remains of no less than six hillforts and four castles along the Mid Cheshire Ridge.

Gaze up at the wooded bluff in front of you with the castle ruins perched on top.

Compared to the low-lying Cheshire Plain that we are standing on, Beeston Crag is an imposing sight, rising to a height of around 500 feet.

The ruins are the remains of a thirteenth century castle, but the Crag contains many secrets, and our medieval forefathers were not the first to build here.

Why has Beeston Crag been a refuge for our ancestors over the centuries? Click to reveal the answer

Helen Rawling - for creating the viewpoint

Holly Parsons at Bradt Travel - for assistance in producing the viewpoint

Andrew - for use of his photographs of Beeston Crag and Castle via Flickr (CC BY 2.0)

All other images credited within the text

Legend says that Richard II hid his fortune at Beeston Castle before he left England for Ireland in 1399. Supposedly a hoard of gold coins awaits discovery still...

The sands of time