To the left of the path is a large outcrop of grey stone. Walk up and take a closer look.

You’ll spot some markings on the rock that look like straight lines. What do you think these might be?

This rock is slate and the markings were made by quarrymen who dug the slate out and split it into narrow slabs for building homes and cladding roofs. When you reach the village take a look at the buildings and you’ll see many are roofed in local slate.

White Moss is an example of an open quarry but when the slate disappeared underground, miners had to follow. Their digging left behind underground caves in the hillside. You’ll see a good example towards end of trail when we reach Loughrigg Terrace.

On the way to the next stop look out for Brockstone Cottage at the top of the path. See if you can spot a damp area overgrown with reeds and bog cotton just below the house. In Wordsworth’s day this bog was known as White Moss Pond. It froze over more quickly than other nearby lakes and ponds and was popular for ice skating. 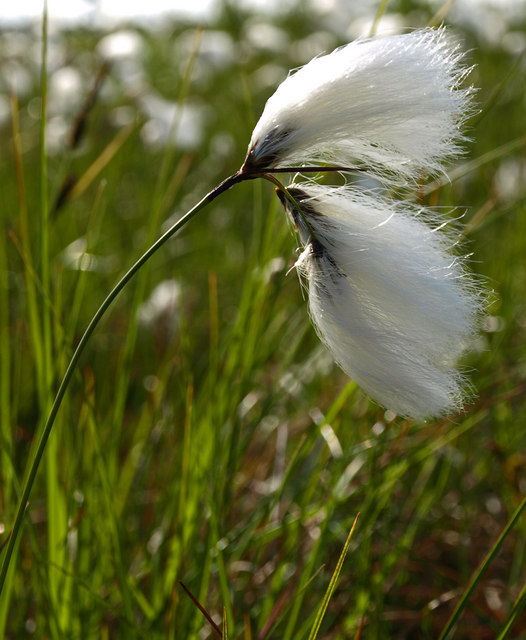 Depending on the time of year you might see the feathery white flowers of the bog cotton plant growing here.

This species is a good indicator of wet ground and often marks the site of dried up lakes or the source of a river.

When you reach a crossing of paths turn left (just below Brockstone Cottage) and follow the obvious path until you reach a stony beck running down the fell alongside a dry stone wall on the left.

We’ve already seen that rocks are a key part of the Lake District landscape, but another obvious feature we will keep coming across is water. Watercourses come in all sizes from tumbling gills hidden in the grass to magnificent rivers draining vast areas of the county. In Cumbria there is plenty of rain which can change the character of a river in just a few hours, from a nondescript, peaceful trickle to a powerful torrent that threatens the land around. 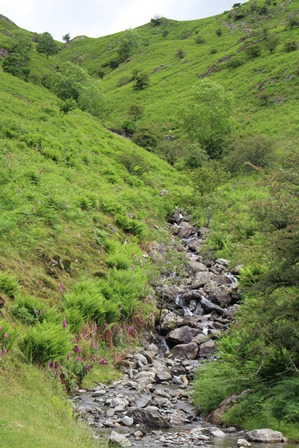 The water flowing down the hill to the left of the path is Dunney Beck. Its course has created a steep sided valley shaped like the letter V, which along with the gurgle and burble of its downhill flow, adds interest and shape to the landscape.

Though this small beck might not seem very powerful today, streams like these were vital to the development of industry in the Lakes. From the medieval period until the 19th century, the abundant power available from the becks in the valleys was harnessed for many industrial processes. These included grinding corn, wooden bobbin making, crushing bark for tanning leather, and making linen and woollen cloth.

Up to the left (but not visible from here) is a Victorian aqueduct built to carry water from Thirlmere (approx 5 miles north of here) to the growing city of Manchester 95 miles away. Though we think of the Lake District as a ‘natural’ environment, Thirlmere was carved out not by nature but by man. The valley was flooded and a reservoir created to provide water to the growing industrial city.

The 100 mile aqueduct passed through Grasmere and Rydal and you can still trace its course in the present landscape by the distinctive access gates built by the Manchester Corporation at the end of the 19th century.

Continue following the main path across the hillside until you reach a dry stone wall on the left of the path with a large wooded, rocky outcrop above.

Another distinctive feature of the Lakeland scene is its fells. Coming from the Old Norse for mountain, ‘fell’ has endured in the north of England as a word for hilly uplands. The rounded peak up to our left is Nab Scar.

The word scar also comes from Old Norse and means crag. It refers to an outcrop of exposed rock found on a hilltop or gorge.  Features like Nab Scar were created during the last Ice Age, when huge sheets of ice scraped away the soil-covered spurs in many valleys particularly in Cumbria and the Yorkshire Dales. 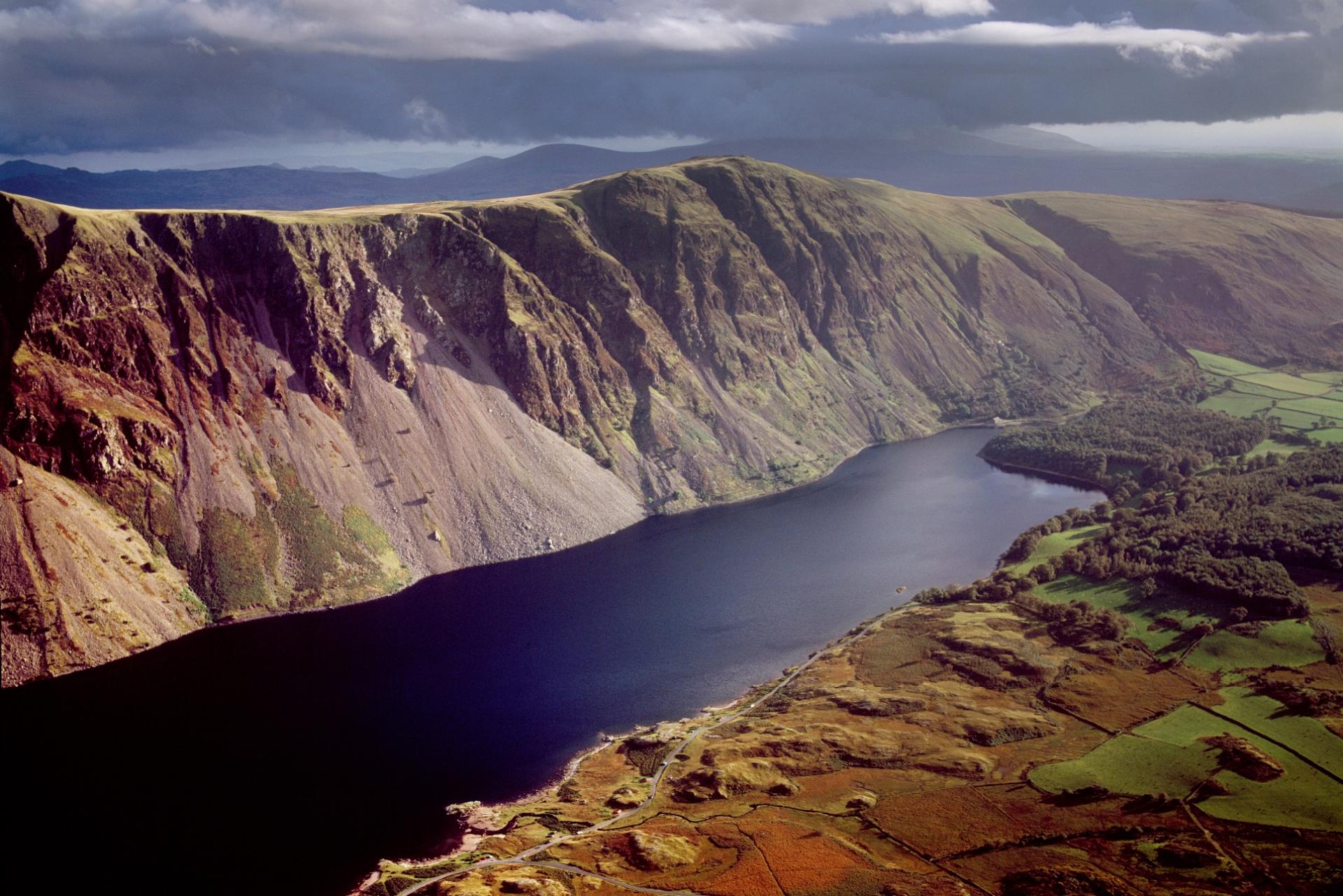 In many cases the exposed surface was then affected by freeze-thaw action. Water entered cracks in the limestone and when it froze, the cracks expanded. Repeated freezes and thaws eventually break off rock, forming a scree slope at the bottom of the scar.

But if you look closely you can also spot the human hand in this landscape. The path we are walking on, the dry-stone wall, the gates we will pass through are all evidence of human intervention. The slopes below Nab Scar once contained a deer park and if you closely there you can see how the wilderness has been subtly landscaped and contained.

Follow the obvious path passing through gates and alongside a dry stone wall. Stop when you reach an obvious stone built seat with a view of Rydal water below.

Stop and rest a while on this stone slab and enjoy the views across Rydal Water. Though it’s quite comfortable, this bench wasn’t built for the convenience of weary walkers.

It’s actually a coffin stone and was used by pallbearers to rest the body en route to the graveyard. Before a paved road was built, the dead were carried along this path from remote rural communities like Rydal to the town of Ambleside to be buried in consecrated ground.

Variously known as corpse roads, coffin routes or church ways, while the original purpose is long gone, many of them still survive as public footpaths.  They also have a long association with ghosts and Shakespeare wrote of them in A Midsummer Night’s Dream:

Now it is the time of night
That the graves all gaping wide,
Every one lets forth his sprite,
In the church-way paths to glide

Imagine for a moment what it must have been like to walk this route bearing the weight of a heavy coffin during rain and snow. The path would have been boggy and uneven and not so well looked after as now, the pallbearers fearful of sprites and demons on the long, dark, arduous path ahead… 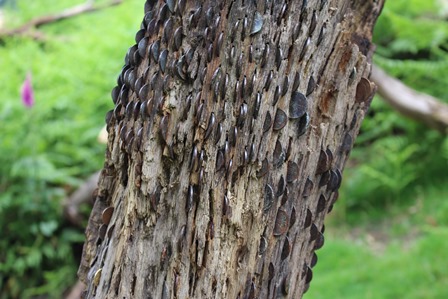 Continue on the obvious path (the coffin route), passing a coin tree and emerging onto a tarmac road outside Rydal Mount. Turn right and walk downhill to reach Rydal church. Walk through the churchyard and 'Dora’s Field' to emerge onto the busy A591 near the Badger Bar. Cross the road opposite the pub, go through a gap in the wall to find a footpath alongside the river. Cross the bridge and turn right. Follow the path until you reach a small tree lined beach at the eastern end of Rydal water.

From here the whole of Rydal Water can be viewed at once.  The lake is surrounded by woodland and grazing pasture and framed by the tops of craggy high fells, including Heron Pike and Loughrigg Fell. This creates an intimate rather than breathtaking scene. 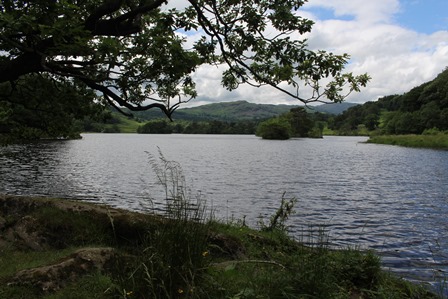 Compared to the vastness of Windermere which measures 15 square km, Rydal at just 0.3km is one of the smaller lakes. But with over fourteen lakes and tarns in an area measuring just 36 miles wide by 40 miles long, have you ever wondered why there are so many bodies of water here in this small area of North West England?

Like the other lakes, Rydal was created under harsh conditions. The stunning scenery here was formed first by volcanic eruptions which created a tough volcanic rock. This rock was later folded and uplifted into a vast mountain range. But it was largely the glacial movements of the last Ice Age between 25,000 and 10,000 years ago that carved out the dramatic landscape of lakes and mountains. 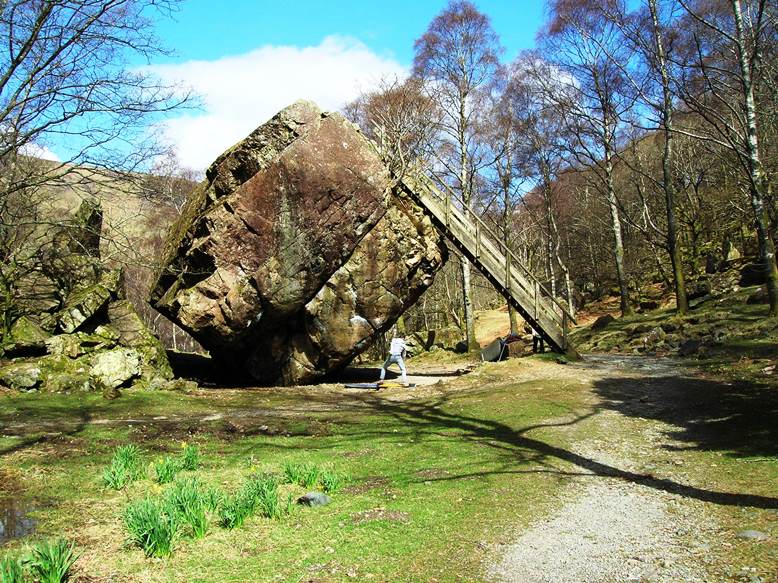 During the last Ice Age, the area was the source of many glaciers which carved out deep U-shaped valleys. When the ice finally retreated about 10,000 years ago, it left behind deep valleys that became the lakes we see today.

Part of the appeal of the lakes are the tiny (and not so tiny) islands reached by boat or brave swimmers. There are 43 Lakeland islands with Windermere boasting 20. From here you can see that Rydal Water has just two - Heron Island and the smaller Little Isle, both too small to be inhabited. These wooded islands add to the mystery and allure of the lakes. They stoke our sense of adventure and conjure up Swallows and Amazons-style escapades.

Keep on the path near the shore with the lake on your right. When you’ve nearly reached the end of the lake take a path uphill to your left signposted Loughrigg Terrace. When you reach a crossing path, turn right and walk along the terrace path until you reach a bench with views of Grasmere on your left and Rydal Water on your right.

Stop on one of the benches and enjoy the views of Grasmere, to your left and Rydal to the right. It’s a particularly spectacular view if you’re here at sunset or sunrise.

Behind us towers Loughrigg Fell. There are several paths to choose from if you wish to walk up to the summit (335m) or along what’s known as the ‘terrace’ (120m).  If you do venture higher you’ll come across Rydal Cave – a large cavern that was dug out by slate miners. Like the White Moss Quarry which we saw at the beginning of the trail, the slate was used for roof tiles. At the entrance is a shallow lake full of small fish but there are stepping stones so it's usually possible to make your way across it to the dry floor inside and explore. 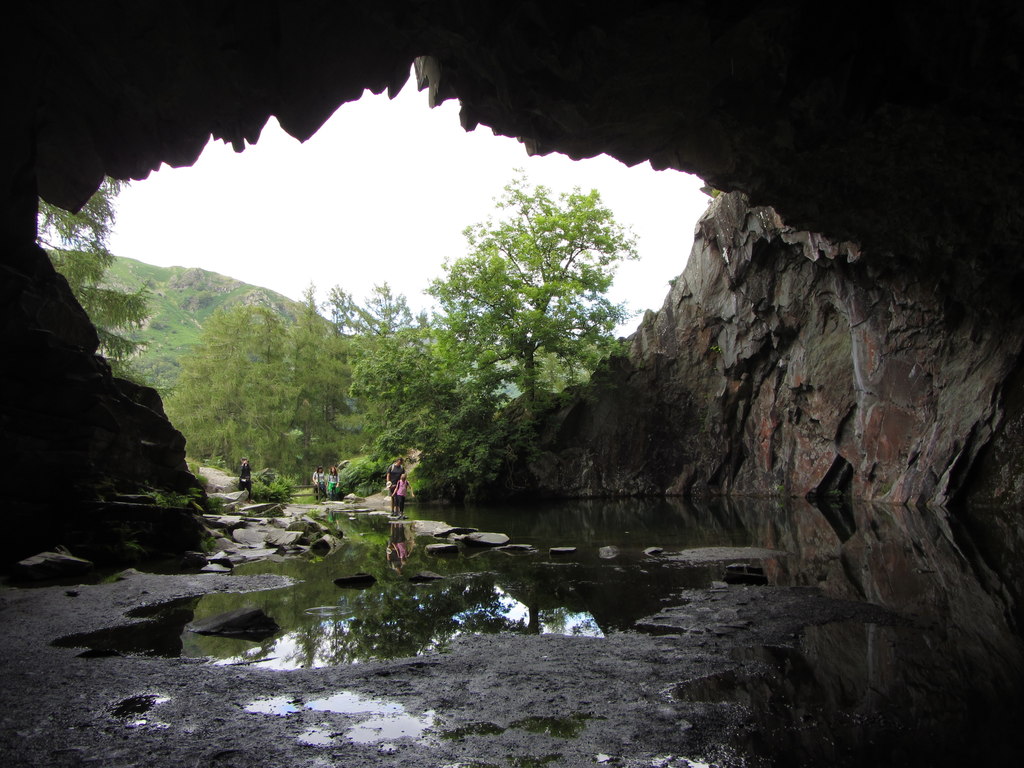 Could it have been this view that Wordsworth described as ‘the loveliest spot that man hath ever found’?

Like the poet, we’ve chosen the low road and looked beyond the natural beauty to find the stories within this much loved but little understood landscape.

Follow a track downhill to the bridge over the River Rothay, cross the bridge and follow the path through the woods sign posted White Moss Quarry car park. The path will bring you back to the A591 and the car park where the trail began.

Poet and keen walker William Wordsworth described Rydal as "the loveliest spot that man hath ever found". In his Guidebook to the Lake District he suggested the best way to appreciate it:

"passing behind Rydal Mount and under Nab Scar…very favourable to views of the lake and the vale…The horse road…under Loughrigg fell, does justice to the beauties of this small mere, of which the traveller who keeps the high road is not at all aware."

This trail around Rydal Water follows Wordsworth's route but has has more to show us than "favourable views". From rocks to reservoirs, burbling becks to bearing the dead, uncover the stories behind the place that he called home.

Caroline Millar for creating and photographing this trail

Walking with Wordsworth and Coleridge

Discover links between literature and landscape in the Quantock Hills