This pile of stones by the side of the path is our first clue of human involvement in this remote landscape.

Marked on the map as a cairn, it could either be a burial mound or a waymark to signify a special place.

Take a look around you, despite appearances this area of high ground known as Divock Moor has one of the largest concentrations of Bronze Age remains in the Lake District. If you look on an Ordnance Survey map you’ll see the words cairn, tumulus, cop stone and the cockpit.

The ancient looking font tells us these are all prehistoric features. The map also shows the symbol of a five-pointed star. These denote visible prehistoric earthworks. They can be quite hard to spot, but the presence of these earthworks and monuments reminds us of the long history of human settlement in this landscape. 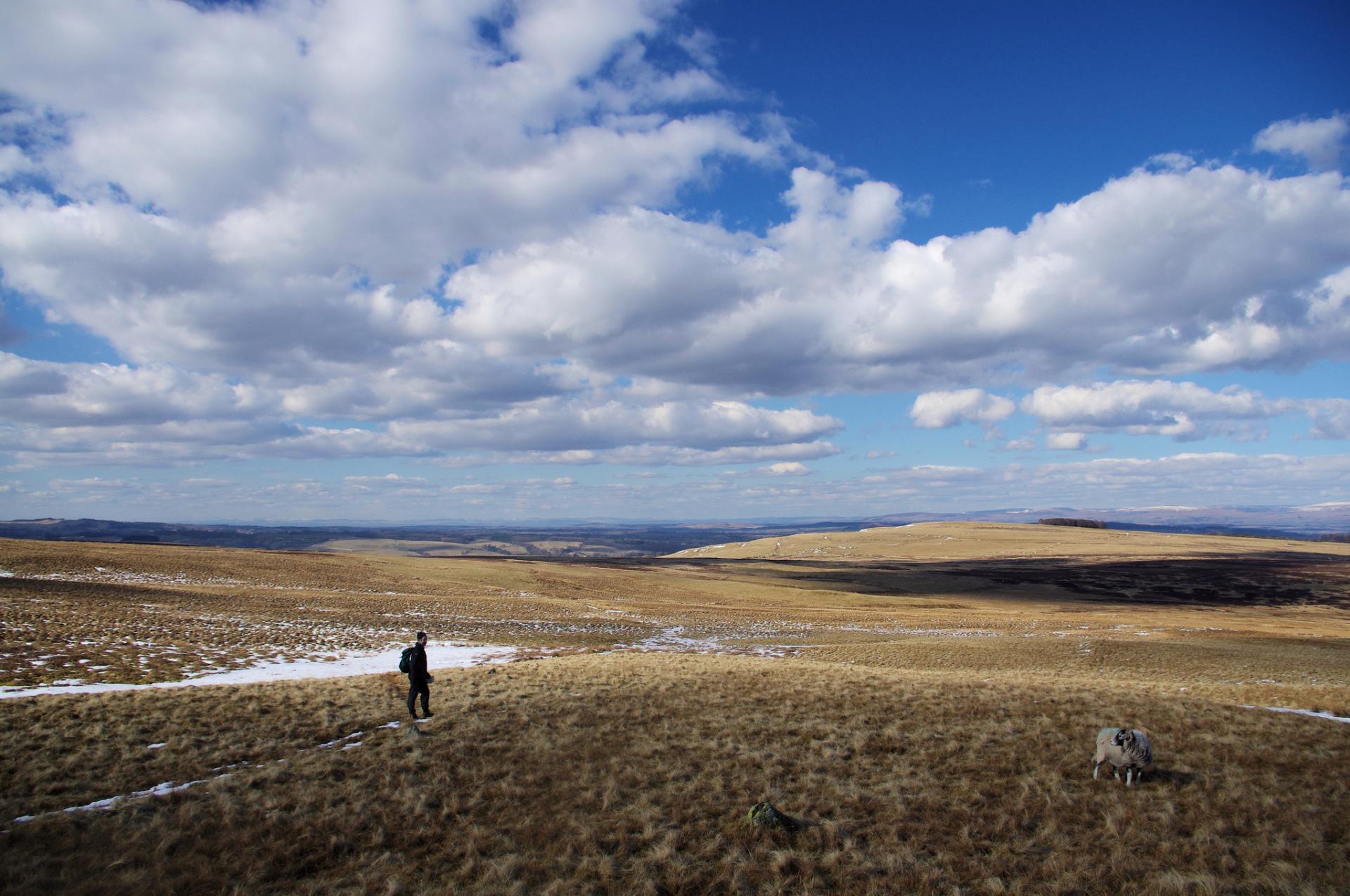 We’ll find out more about these monuments later on the trail.

The cairn also marks a crossing point on the path. The modern footpath heads straight uphill to Askham Fell, but the path crossing to our left and right is not just a leisure route for today’s hikers. Instead this is ‘High Street’ - a 2,000-year -old road.  It was built by the Romans to link their forts at Penrith (to the north) and Ambleside (to the south).

Roman engineers chose to build the road across the gentle slopes and reasonably flat summit here instead of through the forested, marshy valley below. They were also smart enough to follow the contours of an older prehistoric path which made their job easier. Today you can follow the twelve-mile route as a well-marked footpath. On some stretches you can even see Roman kerbstones and patches of the gravelled surface.

Instead of today’s walkers and cyclists, try to picture Roman armies - their armour glinting in the sunlight, hear the thunder of their footsteps marching in unison over the hill, see their colourful standards rippling in the breeze.

Take the footpath off to the right across the moor and follow the obvious path until you come to a circle of stones off to the left.

Take time to wander in and around the circle of stones here. There are 27 of them arranged on the inside of a low bank or ‘henge’.

It might not be Stonehenge or Avebury (which at a quarter of a mile is Britain’s largest stone circle) but this group of stones is a significant monument that speaks of an entirely different age.

Nobody really knows what these circles were built for. They might have been meeting points where clans came to trade or, like our modern churches they may have been built for rituals and celebrations. Many prehistoric monuments are also aligned with astronomical events, marking for instance the movement of the moon, or sunrise or sunset. 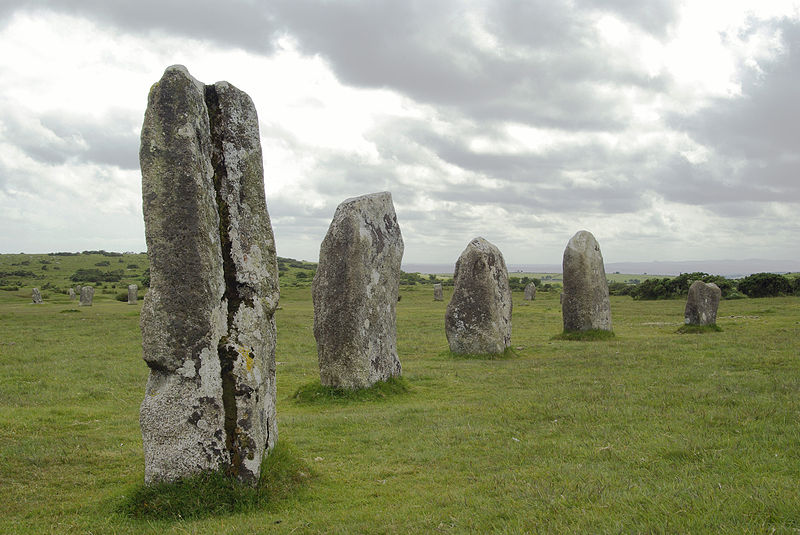 Take note of the circle’s location high above Ullswater. For our Bronze Age ancestors and for us today, high places held significance. These lonely stones up on the quiet moor were once a hugely important site, a place where people came together to enjoy the majestic view no matter what the underlying significance for the people who first arranged them here.

Continue on for just a few steps until you reach a flat stone that marks a shallow ford across a stream.

This flat stone marks a crossing point over Elder Beck, a small stream that rises just north of us and flows down to feed into Ullswater, the largest of the lakes after Windermere.

Along with the elevated views and proximity to an ancient path, this water source is probably another reason why our ancestors built their stone circle here in this seemingly empty place. 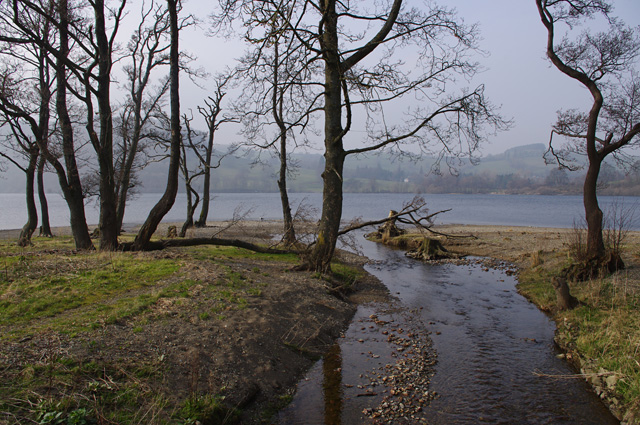 This is a good spot to enjoy the long view of Ullswater and the fells beyond. Depending on the time of year and the weather you might find yourself alone or one of many other explorers eager to seek out prehistoric evidence or spot the route of the old Roman ways. In the late 1800s, the flat summit here was popular site for local celebrations including Summer fairs where farmers wrestled, raced horses and staged cockfights (hence the name of the Cockpit stone circle).

Far from wild, remote and ‘untameable’, this is a well-used, familiar and even managed landscape full of clues to our past if we know where to look.

Retrace your steps along the same path past the stone circle and back to the main path by the cairn. Turn left and follow the well-marked path back to the start of the trail.

A short walk near Ullswater, in the Lake District, to discover a Roman road and ancient stone circle

At first glance this featureless fairly level tract of land doesn’t offer up many obvious signs of life. But if we look a little closer there’s evidence that far from being remote and wild this is a much trodden area.

In fact this treeless moor was once strategically important land, used and celebrated by our ancestors from the wild Celts to the enterprising Romans and beyond.

On this trail we’ll stroll along an empty ‘High Street,’ sit in a ‘cockpit’ and enjoy tranquil views of one of the loveliest lakes.

Caroline Millar for creating and photographing this trail

Jo Kemp and Rory Walsh for advice on the text

The Cockpit is one of over 300 surviving stone circles in Britain. Most of them were built between 3000 and 2000 BC at the start of the Bronze Age.