Look at the map and you’ll see that we’re in a remote part of the country. The nearest town (Middleton-in-Teesdale) is three miles away. But here at Bowlees we find a large car park, toilets, picnic area, and interpretation centre. There’s a mud kitchen for children, signposts to a variety of short and longer walks, extensive maps of the area and a café.

Perhaps you were just expecting to park your car (or get off the bus) and set off into the wilds with just a map. This contrast of expectations is a clue to some of the themes we’ll be looking at on the trail today – just how much is this landscape ‘natural’ and how much of is managed, curated even for the visitor?

The Bowlees visitor centre was built as a Methodist chapel but today nature worship is the local religion. What was primarily a working landscape, where farmers and miners drew a livelihood from the tough soil, is now a spot for recreation and tourism. These pursuits have changed our relationship with the land. Keep these thoughts in mind as you continue on the trail.

Continue past the visitor centre and down the lane to the main road. Turn right and take a footpath sign left across a field. Entering woodland on the banks of the Tees, make a short diversion to the riverbank before the bridge to get your first look at Low Force waterfall.

This is Low Force, the lower of two waterfalls we will see on this stretch of the River Tees. It’s a wonderful spot to stop with the sights and sounds of rushing water filling your senses. Unlike at High Force which we’ll come to later, you can get quite close to the falling water and experience its energy and power.

Here at Low Force we get to enjoy two cascades. The river plunges first over a ledge of rock into a plunge pool then drops again to rush underneath the Wynch Bridge on its journey across country to the North Sea.

For many of us waterfalls are a place of wonder. They are the focus of our hikes or make a dramatic setting for our picnic stops. But how many of us stop to ask the question why waterfalls appear. Why doesn’t the river just flow along steadily through the countryside from its source to mouth? Why are there these dramatic falls? 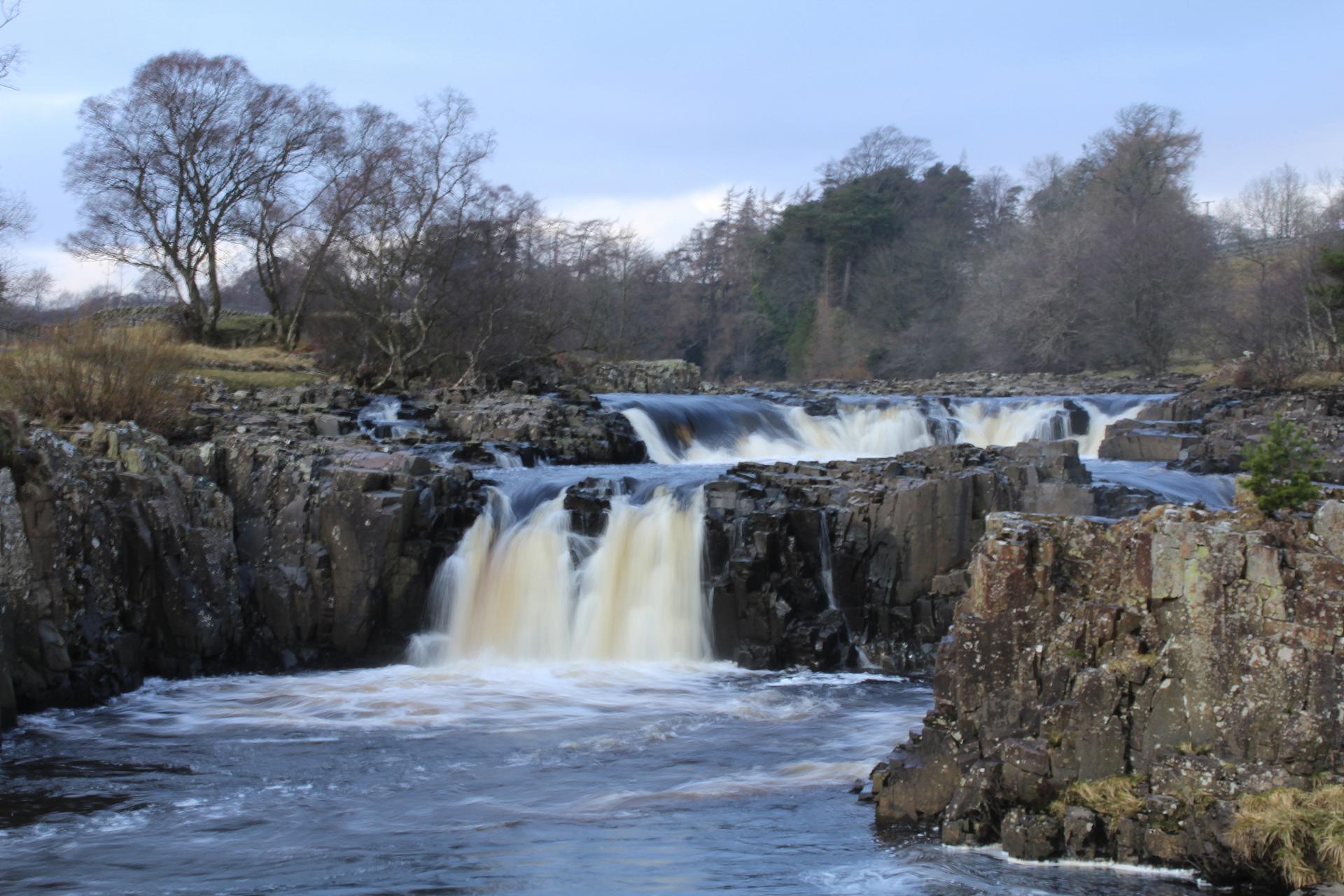 Look at the vertical dark rocks in the water and on the riverbanks. These rocks are dolerite and they’re the reason for the dramatic change in level. On this trail you’ll encounter two main rock types – limestone and dolerite. As the River Tees carved out its way through the North Pennines it naturally wore down the softer limestone rocks. When it reached the bands of tough dolerite (here and at High Force which we’ll come to later) the river met an obstruction. As the water isn’t able to erode the hard rock a waterfall occurs.

This is because the underlying rocks have changed from tough dolerite to softer limestone and over time the river has worn them down.

Cross the narrow (Indiana Jones-like!) Wynch Bridge, turn right and follow the path until you reach two sheep on a dry stone wall.

This sculpture of two sheep on a dry stone wall is a lovely example of public art that connects people to the landscape. The sheep are carved from local limestone, the underlying rock that helped to give Upper Teesdale its distinct character.  One side of the wall reads ‘A wonderful place to be a walker’ and on the other side ‘It reverts to scrub, once it’s gone its lost forever.’

The quotes and the sheep remind us that this is also a farming landscape. The fells we see around us look the way they do because farmers have grazed sheep here for hundreds of years. The reference to the land ‘reverting to scrub’ lets us know that without proper land management we wouldn’t be able to enjoy this landscape at all.

A lot of work goes into preserving the ‘natural’ landscape; clearing scrub, improving trails, mending stone walls and other maintenance. As well as being fun, the sculpture is a reminder to value these places and not take them for granted. 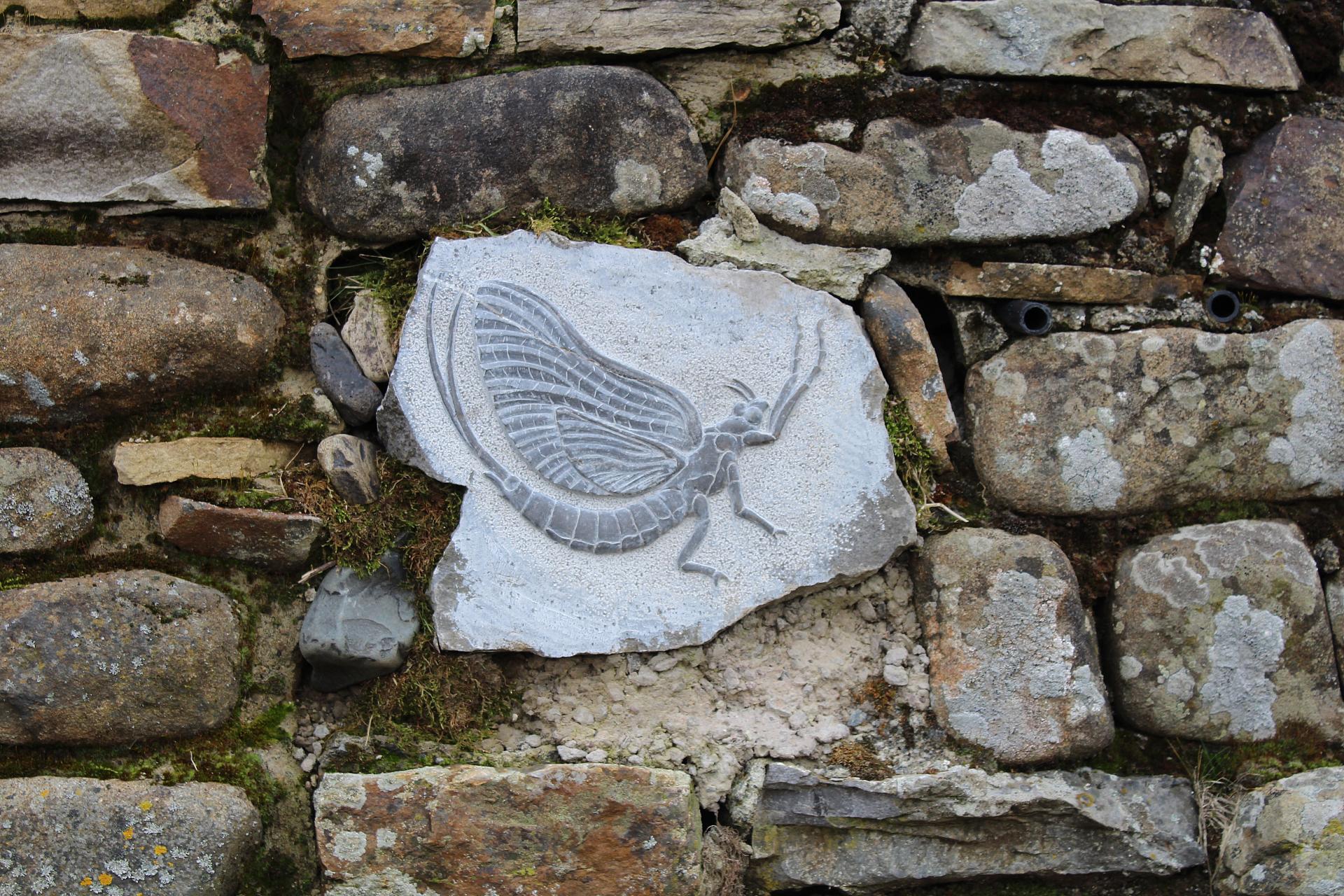 As you continue the trail you’ll see other artworks embedded in the dry stone walls. These plaques show some of the creatures which inhabited Upper Teesdale around 330 million years ago when it lay under shallow, tropical seas. Their decomposed bodies eventually crumbled to form the limestone and sandstone rocks which in turn lend the area it’s dramatic, rocky character.

Continue on the path alongside the river until you come to an information board on Moor House National Nature Reserve.

Though the land under our feet hasn’t changed, this information board lets us know we’ve now entered a National Nature Reserve (NNR). This means that it’s been identified by Natural England as a key place for wildlife and natural features and is therefore protected by law.

This reserve at Moor House covers 88 square kilometres and features many rare habitats including low-lying haymeadows and blanket bogs. Nowhere else in Britain is there such diversity of rare habitats in one place. Look at the board to find some of the species to look out for.

Does reading this board and knowing we’re in a specially designated area make you feel differently?

Many might think of this landscape as ‘wild’ and ‘natural’ but it is in fact both shaped and highly managed by people. Without farming on the fells or regular grubbing of the heather moorland it would become truly wild and hard for us to penetrate.

Continue on the path alongside the river until you reach an area of evergreen trees in earshot of the waterfall.

The prickly evergreen trees either side of the path are junipers, probably best known for flavouring gin. Upper Teesdale is home to the largest juniper wood in England. Bent over like old men and barely taller than a child, the trees are shaped and stunted by south-westerly winds and the regular burden of heavy snow.

Juniper was one of the first trees to colonise Britain at the end of the last Ice Age some 15,000 years ago. Though their berries are famous for flavouring gin, junipers are also an important source of food for animals like mice and voles and as a habitat for insects, fungi and lichens

The trees are an important native species and as such are protected. Yet they are prone to a fatal fungus that is killing them off. The foot wash station we just passed is one of the ways Natural England, who manage the reserve, are trying to stop its spread. Left to its own devices the disease could wipe out these rare plants. It’s a good example of human intervention in a seemingly wild place. 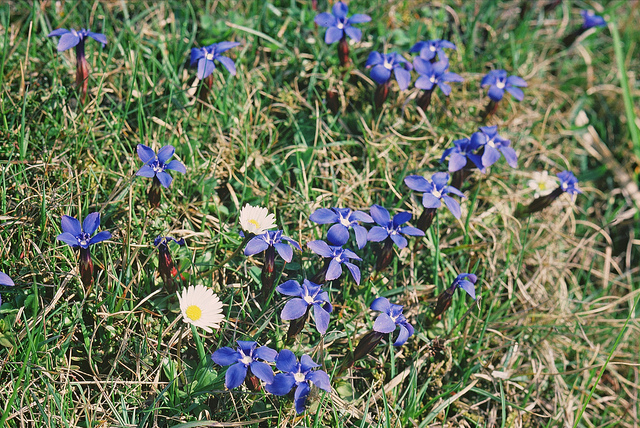 Upper Teesdale, high in the North Pennines is one of the few places in Britain where you can also see plants that have survived since the Ice Age. If you’re here in Spring, look out for spring gentian and wood aneonme, in Summer globeflowers and heather and lichens, mosses and fungi in Autumn and Winter.

Continue on the obvious path ahead to High Force waterfall.

As you approach High Force a rumble of water fills your ears. Enticingly the waterfall itself remains out of view as you wend your way towards it. Just off to the right of the path there’s a place to take a peek before continuing to the top.

Stop and rest for a while by the bench. Here the white water breaks over the wet-black rocks and falls a massive 20 metres over a rocky ledge into a pool below. Draining as it does from the peaty Pennines the water is dark brown. The sight of the dark water and white foam tumbling over the falls has been likened to brown ale!

Like Low Force, the waterfall we encountered at the start of the trail, High Force exists thanks to the local geology in particular a band of rock called dolerite. When the river meets this tough rock, unlike the softer limestone, the water cannot erode it and so gives rise to a waterfall. 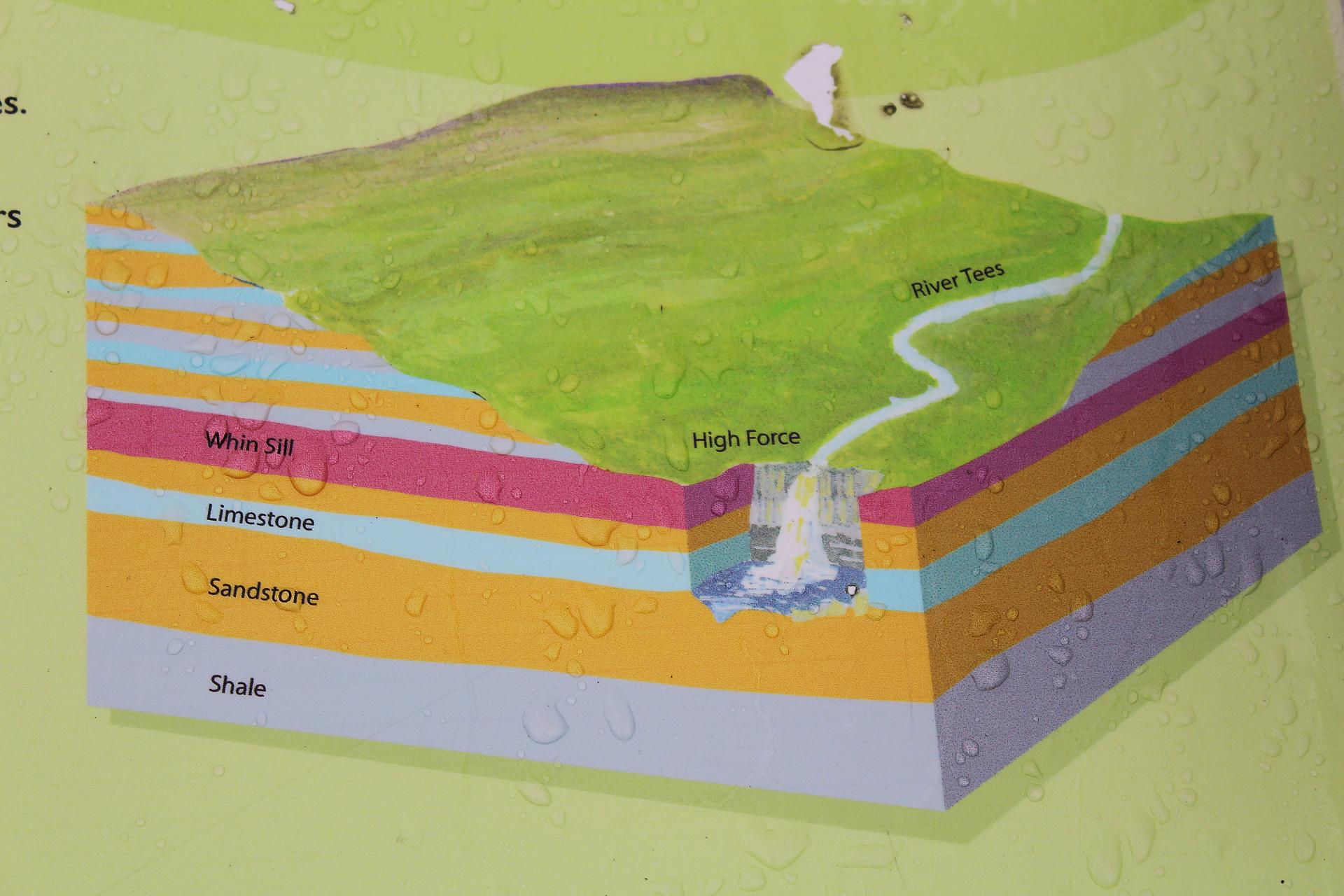 Dolerite is formed as molten magma deep in the Earth’s core. Pushed up into the Earth’s crust it intruded between layers of other rocks like limestone, sandstone and shale before spreading out to form a thin sheet known as a sill.

The Great Whin Sill extends over a large area of Durham and Northumberland. Besides creating these waterfalls, it formed a tough resistant ridge of land which was later fortified as Hadrian’s Wall.

Here at the vertiginous head of the falls is where we finish our trail. The waterfalls here and at Low Force are remarkable natural features. Like moths to a flame, we find ourselves drawn to these dramatic sights. They are also a huge visitor draw and people have found ways to harness their power for economic gain.

On the other side of the gorge the white building you might have spotted is the High Force Hotel. It’s from here that most visitors usually access the waterfall. In summer the busy car park charges entry, a gift shop offers souvenirs, the pub makes sure day trippers are fed and watered and sells photos and paintings of the falls as mementos to take home. It’s another way that people affect and to an extent curate landscapes like these. We visit these waterfalls not only because they spectacular and beautiful but because they have become attractions. There’s a comfort in knowing that a tearoom and gift shop is at hand.

To return to Bowlees visitor centre, you can retrace the whole route or alternatively retrace your steps to Holwick Head Bridge, where you can catch a bus. To do so, cross the bridge and follow the footpath to the left up to the High Force Hotel car park and bus stop.

A rock and a hard place

Upper Teesdale, the most northerly of the Yorkshire Dales, describes itself as ‘a hidden corner of England.’ It’s renowned for being little-known, unspoilt and offering solitude and tranquillity.

This trail takes you up to the summit of England's highest waterfall whilst avoiding the gift shops and entrance fee at the more accessible viewpoint.

As you wind your way along the banks of the River Tees, enjoy  the stunning scenery of high fells, rocky outcrops, the tumbling river and the dale. This walking trail invites you to look again at this remote place and appreciate a landscape shaped by people as much as by nature.

Elizabeth Pickett and the North Pennines AONB for submitting the idea for this trail.

The name ‘Force’ comes from the Old Norse ‘foss’ brought by Viking settlers over 1,000 years ago.

Get a different view of High Force waterfall

A weather walk up Cross Fell in the North Pennines

Follow a lost river from Durham out to the countryside

Discover another stunning waterfall which inspired the Romantics

A short stroll along the bonny banks of the Tees