Why is this panoramic view from Richmond Hill protected by law?

The view of the Thames from Richmond Hill offers an oasis at the edge of London. It is an easy escape and a calming retreat, a slice of countryside for city dwellers. The Terrace viewing platform at the top was built in the 18th century and is a clue to the view’s historic appeal.

From the Terrace, the curving meander of the Thames flowing into Richmond contrasts with the flat carpet of fields and trees. Glover’s Island in the middle of the river sets off the scene like a cherry on a cake.

Immediately left of the river are the Petersham Meadows. Compare them to the more congested land on the river’s right. Look for several tower blocks and Twickenham Stadium. 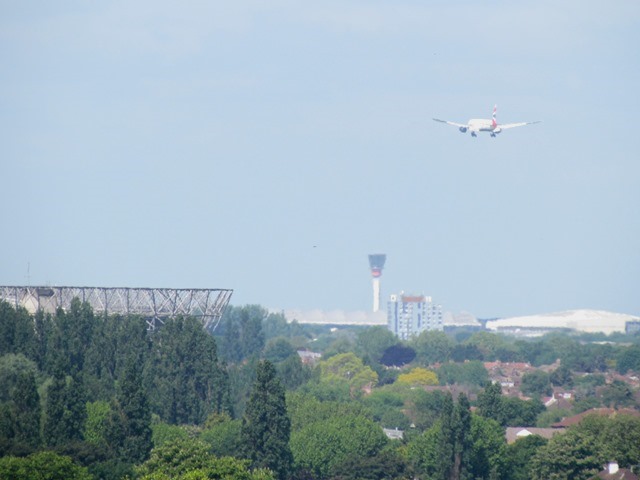 You might also spot the control tower of Heathrow Airport. If not, watch planes on their flightpaths and listen to the roar as they pass overhead.

The airport and other developments threaten the beauty of the landscape. They also underline the reason this view is protected: to prevent urban development spoiling the view of the river.

By the 1890s there were several building proposals for these riverbanks. The owner of Glover’s Island even wanted to put a large advertising board on it that would be visible from the Terrace. These plans never went ahead but the view’s safety was finally assured in 1902.

This was when local landowner Lord Dysart’s ‘Richmond, Ham and Petersham Open Spaces Act’ was passed in Parliament. This Act barred riverside land from Kingston to Petersham from being developed. A plaque on the Terrace lists the many people and groups who worked to protect “the rural tranquillity of this celebrated view”.

But protection came with a price. Part of Lord Dysart’s land was Ham Fields, around 200 acres near Petersham Meadows. Ham Fields were Common Land and under ancient laws they could be used for farming. To maintain his land’s value Lord Dysart wanted to stop this.

This raises questions – what was actually protected and for whose benefit? Protecting riverside views is still contentious. In recent years large stretches of the Thames, Clyde, Tyne and Mersey have been redeveloped beyond recognition, with new developments criticised for changing historic views. As this view from Richmond Hill shows, protecting green spaces can involve grey areas.

Pretty as a picture

Richmond Hill is a very popular spot with landscape artists. Among those who have painted the view are Sir Joshua Reynolds and JMW Turner.

Besides pleasing looks, Richmond Hill profited from the Napoleonic Wars between Britain and France (1799 to 1815). European travel was impossible during the fighting, so British artists looked for inspiring scenes in their native land. 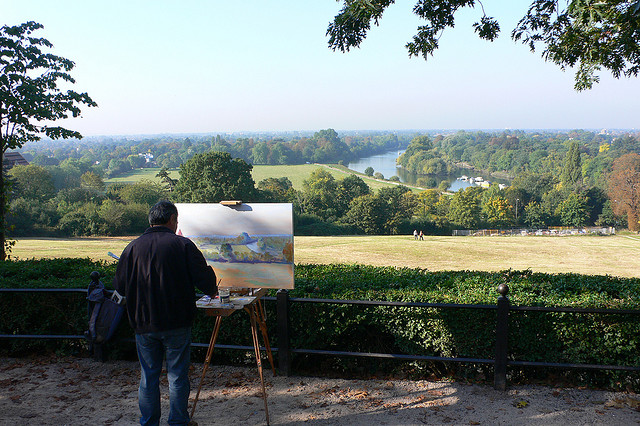 From Richmond Hill let your eyes follow the River Thames snaking from the horizon through lush low-lying meadowland.

This view has been a popular visitor spot for generations, inspiring countless artists and writers. It is famous for its beauty - and for being the only view in Britain specifically preserved by an Act of Parliament.

Why is this panoramic view from Richmond Hill protected by law? Click to reveal the answer

Explore the River Thames between Molesey and Kingston

What does a stone in modern Kingston tell us about ancient Britain?

“Our England is a garden” - Rudyard Kipling

Explore the stories behind another protected view

In the 1920s, the British Empire ruled over a quarter of the globe and over 450 million people