What does Kingston’s Coronation Stone reveal about ancient Britain?

To begin, notice how the stone is presented. The elaborate plinth and ornate railings date from 1850 when it was ceremonially placed in the nearby Market Square. Take time to read the small information board that records the stone's movements since.

The oldest account of it comes from map maker John Speed. In 1627 he wrote "At Kingston likewise stood the chair of Majesty". Historians debate whether this stone is it and how many kings were crowned here. Different records suggest anywhere between two and nine monarchs took the throne in Kingston.

Some of these ceremonies were in the Saxon chapel of nearby St Mary’s Church. At least one king - Athelstan - sat on a wooden platform rather than a stone. In 1730 the chapel collapsed and this stone was recovered. For many years people used it as a mounting block to climb onto their horses.

So is this "the chair of Majesty" or a royal pretender? The Victorians were convinced but nobody knows for sure. Yet this mysterious object also tells another tale...

Rock of ages
Look at the stone itself. This is a Sarsen or ‘grey weather’ sandstone. Sandstone forms over millions of years, when layers of sand and mud are gradually compressed. This piece is between 66 and 40 million years old!

Sarsens are common in Britain’s southern counties, including Wiltshire, Hampshire and Oxfordshire. Some were used to build ancient sites like Stonehenge and Avebury. Sarsens are rare though in Greater London. So how did this one end up here?

One theory is melting ice. Starting 2.5 million years ago, the Earth went through a series of Ice Ages. The planet’s temperature dropped and vast areas were covered in huge ice sheets. In Britain the ice spanned from Scotland to the northern edge of London. In places it was nearly a mile thick.

From around 12,000 years ago the planet slowly warmed up again and the ice began to melt. Some broke into large sections, called glaciers, while the rest became sludgy ‘meltwater’.

Rocks in the meltwater’s path were swept along to new locations, sometimes across hundreds of miles. Such rocks are known as ‘glacial erratics’ - and the Coronation Stone could be an example.

This monument may be Victorian but its stone heart unveils a story much more dramatic than the rule of kings.

Kingston's natural location - on low-lying land by the River Thames - means there has been a town here since at least Roman times 2,000 years ago. Around 800 years later the river here was shallow and marshy with a natural ‘ford’ or crossing. These conditions made Kingston a strategic trade and meeting point.

This would also have been a symbolic place to crown the king. Kingston marked the border between two large Saxon kingdoms, Wessex and Mercia. The town’s name comes from the Old English ‘cyninges’ and’ tun’ meaning ‘king’s estate’ or ‘king’s enclosure’. This stone may have been placed at the ford to mark the ceremonial boundary. 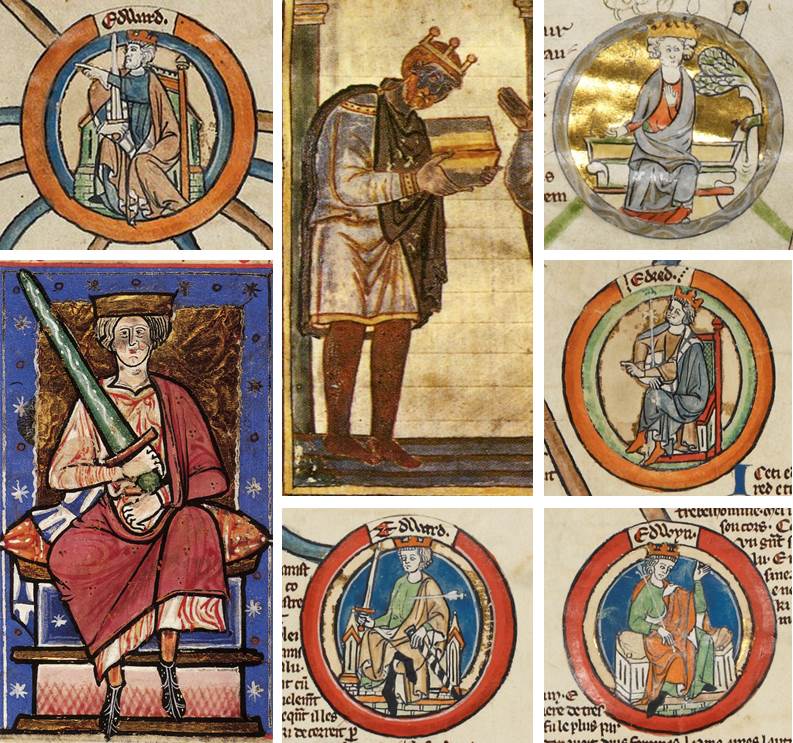 The seven kings said to have been crowned at Kingston (clockwise from top left): -
Edward the Elder; Athelstan; Edmund; Eadred; Eadwig; Edward the Martyr; Ethelred the Unready

Scenic Kingston-upon-Thames is England’s oldest royal borough. This status was officially awarded in 1927 but can be traced back to the 10th century when accounts say seven Saxon kings were crowned here.

They span from Edward the Elder (who ruled from 899 AD) to Ethelred the Unready (crowned c.975). Local lore says that to become king of England, each man sat on this large stone.

Yet in the ‘king’s town’ not everything is as it seems.

What does Kingston’s Coronation Stone reveal about ancient Britain? Click to reveal the answer

Jo Kemp and Caroline Millar for edits and suggestions

"At Kingston likewise stood the chair of Majesty whereon Athelstan, Edwin and Ethelred sate at their Coronations and first received their Sceptre of Imperial Power."
- John Speed, 1627

Why is the view from Richmond Hill protected by law?

“Our England is a garden” - Rudyard Kipling