Why does this London terrace include two fake houses?

Look along the terrace and at the surrounding streets. Notice the two false buildings preserve the area’s appearance. Without them there would be an ugly gap in the middle of the row.

If the original houses were burnt down or bomb damaged, the gap would probably have been filled by replacement buildings. These fake fronts suggest something is hiding. The answer is - literally - underground. Listen carefully and you may be able to hear it.

Below our feet is part of the London Underground. Today this stretch is where the District and Circle lines run between Paddington and Bayswater. Built in 1868 it’s one of the oldest parts of the Tube network. To make way for the tracks, two houses in this terrace were demolished.

Locals agreed to the development on condition that their prestigious area wasn’t spoilt. So what we can see is a 5-foot thick concrete wall, moulded and painted to match the rest of the terrace and hide the Tube line. A pair of trees - which would block out any light if you lived upstairs - aids the disguise. 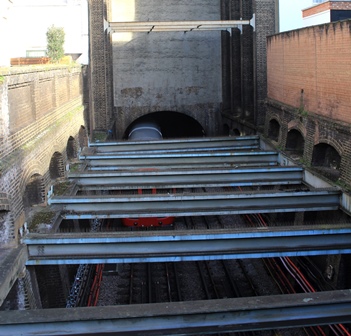 If you go around the block onto Porchester Terrace you will reach a high brick wall. If you can see over the top, all is revealed.

The view is a bit like being behind the scenes of a film set. The concrete façade stands above the railway tracks, while girders brace the real buildings from falling onto the trains below.

Though the false buildings are decorative, this space behind them had a practical use. This small bit of railway was left uncovered because before the 1900s, the Underground used steam trains. To reduce smoke building up in the tunnels, open-air gaps like this one allowed the driver to release steam from the engine.

If you spot gaps like this next time you’re on the Tube, you’re travelling on an older line.

The first Tube lines were built using a rolling ‘cut and cover’ system. Workers dug a trench, placed the tracks in the bottom and then covered them up in sections. This method was fast and reduced disruption. It also made the most of London’s geology.

North of the Thames, the dominant soil is clay. London Clay is soft and holds water, making it easy to tunnel through. South London meanwhile has large amounts of chalk and gravel. These soils are tougher, with greater risk of collapse and leaks. This is why of the 270 Tube stations in use today, less than 10 percent are south of the Thames.

Hyde Park is surrounded by grand Georgian terraces. Seen from the air these rows of elegant white facades look like ribs in a giant skeleton. At first glance Leinster Gardens is a typical example. But the two houses behind the pair of tall trees are not what they seem.

Look carefully and compare them to the buildings on either side. You’ll soon spot some things missing.

The windows are painted - there’s no glass, curtains or rooms behind. The doors have no letterboxes, handles or numbers. The whole building fronts are false.

Why does this London terrace include two fake houses? Click to reveal the answer

Caroline Millar and Jo Kemp for suggestions and edits

Pranksters have used these houses to book taxis, takeaways and even a fancy dress party. The buildings also featured in an epsiode of the BBC's Sherlock.

What can a grate on a London street tell us about a lost river?

Why is there another street hidden beneath Charing Cross Road?