Welcome to this Discovering Britain trail around Dunwich.

From the Ship Inn, we can get a good sense of the scale of the village today. There’s a pub, a museum, a handful of attractive houses and fields. That’s about all.

In the summer it’s popular with families and many of the homes are holiday lets. An average of just 50 people live in the village all year round. You might wonder why a place this small merits its own museum…

But if we go back in time to the 11th century it was a different story.

In the Domesday Book compiled in 1086, Dunwich was recorded as being one of the ten largest towns in England. It had a population of around 4,000 people, was one of our biggest and most significant ports and an important centre of Christianity. So what happened? Let’s go to the next stop to find out more.

With your back to the pub, bear right then left and follow the signs downhill towards the car park, beach and café.

This wide, flat car park seems like a huge space to accommodate parking for such a small village. It does get busy in the summer holidays, but you might still wonder at its size.

Keeping the café buildings on your right, walk up onto to the shingle beach. From here take in the topography of the area – the large car park, shingle beach and flat low-lying marshland behind the sea wall which stretches all the way to Southwold to your left and the views of Dunwich cliff and white dome of Sizewell B power station to your right.

This flat area of land now occupied by the car park was once the estuary of a wide navigable river. Just a little further out to sea lay Dunwich harbour - one of the most important ports in medieval England.

Imagine yourself here over 700 hundred years ago. Large fishing boats lie at anchor in the sheltered waters of the estuary. Along the banks of the river wooden jetties and warehouses are the centre of a bustling fishing trade. You might hear strange accents from Scandinavia. For many years this was a centre for herring fishing and Dunwich traded with countries as far off as Iceland and Norway.

Now, from this viewpoint look out to sea and picture if you can a large town with churches, monasteries, hospitals, mills, pubs, village squares, shops and houses. This was the medieval town of Dunwich. Now it lies beneath the waves.

In The Rings of Saturn, WG Sebald’s journey through East Anglia, he wrote "Dunwich, with its towers and many thousand souls, has dissolved into water, sand and thin air. If you look out across the sea towards where the town must have been you can sense the immense power of emptiness." How does it make you feel?

Retrace your steps back up Beach Road to find a footpath on the left signposted ‘Suffolk Coast Path’. Follow the path uphill through woods. Just before a gate into Greyfriars Friary on the right, look out for a single gravestone behind the fence to your left.

Take a close look at the mossy gravestone which clings bravely to the cliff edge. You can just make out the inscription: ‘In memory of Jacob Forster who departed this life on March 12th 1796 aged 38 years.’

Though it seems young to us today, 38 was quite a normal age to die. In the 18th century average life expectancy was just 40. But that doesn’t answer the question; what is a solitary tombstone doing here on the edge of a cliff?

The surprising answer is that you’re actually standing in what was once a large graveyard. This gravestone once rested in the churchyard of one of medieval Dunwich’s parish churches - All Saints. The church building, all of its coffins, gravestones and bones have all been lost to sit. All except this one. 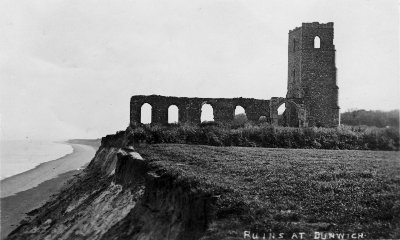 Resist if you can picking up any curious flints or objects you find here and taking them home. In ‘Oh whistle and I’ll come to you my lad’ M R James’ eerie ghost story, an academic (who refuses to believe in ghosts) digs up a whistle found in All Saints graveyard and summons a spirit! 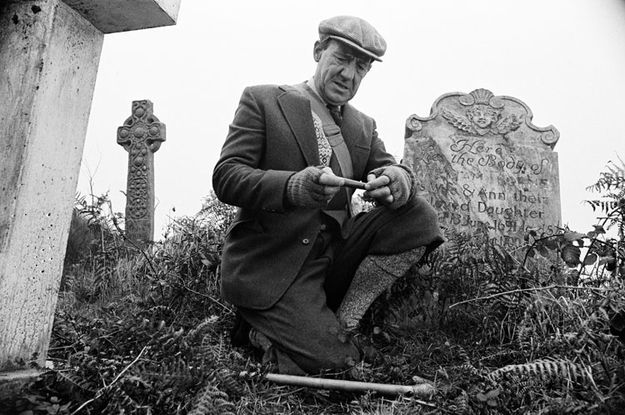 As well as M R James, other writers, artists and thinkers have all been attracted to this melancholy place. Before it fell into the sea and disappeared forever, the painter J.M.W Turner depicted All Saints Church as a ghostly, spectral shape looming over the beach. Victorian poet Algernon Swinburne fled to Dunwich when the bustle of London overwhelmed him, describing the Suffolk coast as ‘A land that is thirstier than ruin… a sea that is hungrier than death’.

This gravestone stands as a lone symbol of what has been lost and a reminder that even Jacob Forster cannot hang on here forever.

Just past the gravestone turn right through gates into the ruins of Greyfriars Monastery.

Along with Jacob Forster’s lonely grave, the eerie remains of Greyfriars Monastery are one of the last vestiges old Dunwich still visible today.

Though it might not look ‘new’ these ruins are from the new Greyfriars which was built here in 1290.  It replaced the original friary which, as with most of medieval Dunwich, fell into the sea. Take a closer look at these walls and notice they are mainly made of stone and flint. Brick is rare in East Anglia and many local buildings (particularly near the coast) use flint to reinforce their homes.

As you wander round, let’s also travel back in time and piece together the story of why one of England’s most important towns disappeared...

Put simply, the coast here is made of soft rocks like sands, gravels and clays which are easily worn away by the waves and the wind in a process called erosion. These rocks were first the key to Dunwich’s success and then its decline. Just north of Dunwich a sandy spit grew southward creating a sheltered anchorage which made it ideal for a port. But massive storms attacked the coast in 1287 and again in 1328 blocking off the entrance to this haven.

As a result, the port and the town itself began to decline, as larger fishing and trading boats could no longer navigate upriver to Dunwich. Another result of the storm of 1328, was the loss of 375 out of 400 homes from one neighbourhood when one terrifying night, people and their homes were engulfed by the sea.

But Dunwich didn’t just disappear overnight. The coastline has been retreating here for over a thousand years. At Happisburgh a little further up the coast in Norfolk, 100 metres of land has been lost in just twenty years.

Retrace your steps back to the path and continue along with the sea on your left. Go through a wooden gate and enter woods. Walk through the woods until you reach a long, straight sunken path.

This sunken footpath was once Middlegate Street – one of the main routes into the medieval town of Dunwich.

It would have been an important thoroughfare with people, animals and goods-laden carts trundling up and down.

Take a look at the pretty arched bridge. This isn’t medieval but a Victorian addition. It was built by a local family to link their mansion to Greyfriars. Pony carts carried tea trollies over the bridge so the family could picnic amongst the ruins.

Not much has changed. Families still stop to eat their sandwiches overlooking the cliffs or in the shadows of the old Friary. Photographers, ramblers and the curious are all drawn to this lonely spot, conjuring up an absence of what has been lost.

Walk down the sunken path, passing under a low bridge. At a wooden footpath sign turn right past a green sign that reads ‘Welcome to Friars Wood’. Keep following the well-marked path until you emerge at a road. Turn right and walk down Monastery Hill. Just before the road veers right take the footpath on the left. Follow this path past houses all the way to St James Street to emerge just past the museum. Turn left, walk to the end of St James Street and enter the churchyard of St James Church through the main gate.

Near the road you’ll find a tall stone buttress. This is the last remaining corner of All Saints, the church that slipped into the sea.  It was rescued from the cliff edge and moved here to the churchyard of St James as a monument and a reminder of the loss suffered by the town.

Here amongst the bones of the departed seems a fitting end to our trail around what many have described as an eerie place, haunted by the ghosts of a city lost to the sea.

The story of Dunwich is of course part of a much larger narrative of coastal change. The east coast of Britain and in particular the coastline of East Anglia, is constantly subjected to the twin forces of erosion and deposition. Erosion of the coastline is caused by waves, storms and tides washing away the land which is then 'dropped' or deposited somewhere else. 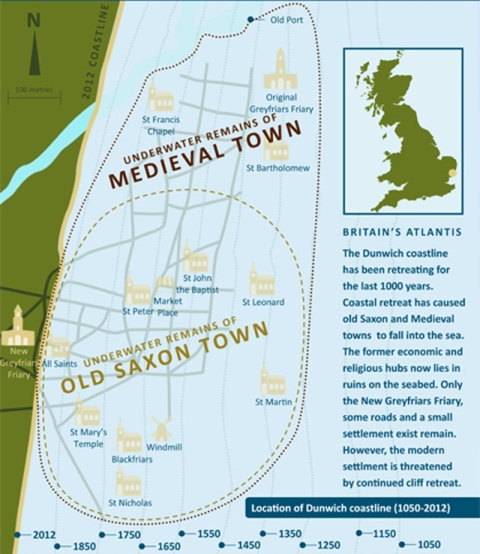 It’s worth remembering that at any point a deadly combination of strong winds, spring tides and low pressure could cause another destructive storm.

Debates on how to protect our land and property continue to hit the headlines. Many experts now suggest a process of ‘managed retreat’ which allows the sea to flood low-value areas rather than investing in expensive coastal defence projects like groynes and new sea walls.

Here at Dunwich a ‘soft engineering’ approach has been trialled. Shingle filled bags dug into trenches that cut across the beach like groynes are an attempt to reduce the movement of shingle and erosion whilst remaining discreetly out of sight.

In An English Apocalypse poet George Szirtes imagines an England finally wiped out by a tidal wave attacking the east coast:

The North Sea had been rough
and rising and the bells of Dunwich rang
through all of Suffolk. One wipe of its cuff
down cliffs and in they went, leaving birds to hang
puzzled in the air, their nests gone.

We hope you’ve enjoyed this short trail. We strongly recommend a visit to the excellent local museum where a scale model of the 12th-century city reveals just how much of Dunwich lies under the waves.

Exit the churchyard and retrace your steps back down St James' Street to the museum and The Ship Inn where the trail began.

Dunwich, on the Suffolk coast is a small seaside village. Unlike neighbouring Southwold with its pier and arcades or Aldeburgh with its upmarket shops, there isn’t much to see.

Yet this place has become something of a mecca for the curious. Dunwich is fascinating precisely because of what isn't here.

Discover the eerie story of the town that fell into the sea and walk with ghosts on this most haunted stretch of coastline.

The staff at Dunwich Museum

"I am walking with ghosts on Dunwich shore…" JS Gosling

Find out what happened to a lost community in nearby Lowestoft

Discover how another of Britain's great medieval towns battled the sea

Explore the picturesque Kent town cut off by our changing coastline