So what does a ‘chip shop brawl’ on a crag face tell us about our right to enjoy the countryside? 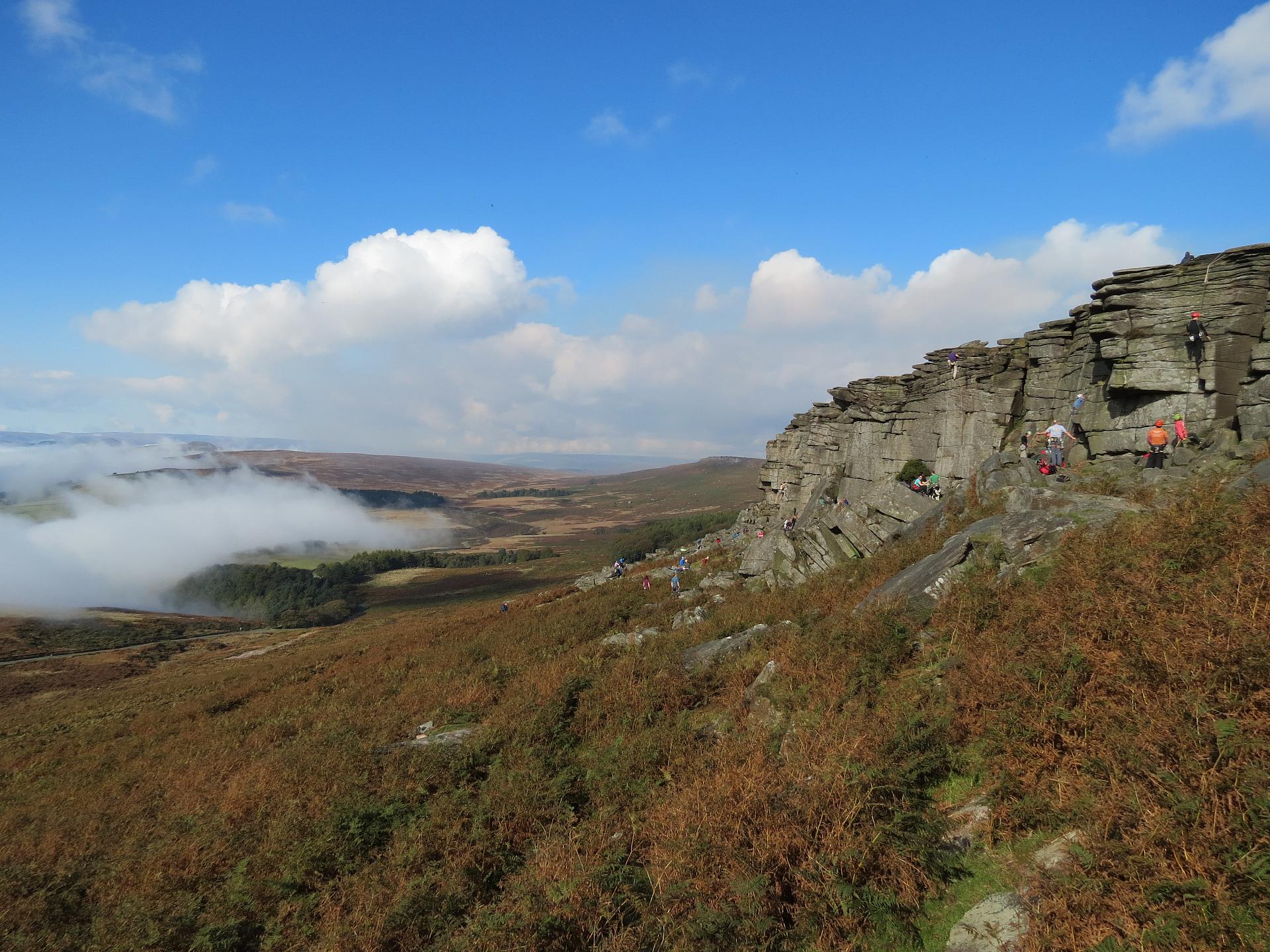 Stanage Edge is formed from Millstone Grit, a coarse-grained sandstone which creates ideal conditions for rock climbing. Seen as the cradle of the sport in Britain, Stanage has attracted climbers since the late 19th century. It is now the most popular climbing crag in the UK and possibly in the world, according to the British Mountaineering Council.

But it is the ownership of this land that has caused the ‘old fortress’ to face a new battle. Stanage is part of the North Lees Estate, which was once privately owned, with the moorland areas managed for grouse shooting and off limits to the public. So desirable was the crag that in the first half of the 20th century, rock climbers often bribed local gamekeepers for access to it!

The creation of the Peak District National Park in 1951 ushered in a slow easing of access restrictions, though this involved long and tortuous negotiations with landowners. The real change came in 1971, when the Park purchased the whole North Lees Estate, including Stanage, for a nominal sum.

The National Park has two primary remits. One is to conserve and enhance the landscape’s natural beauty, wildlife and cultural heritage. The other is to promote the special qualities of the landscape to the public in order that visitors can enjoy and learn about the area. Both these aspects are integral to the effective management of such a popular destination.

However, in 2013, in response to severe budget cuts, the National Park Authority started to consider selling off the North Lees Estate and therefore Stanage Edge.

The British Mountaineering Council, alongside thousands of climbers, walkers, countryside enthusiasts and local residents, rallied together to ‘Stand up for Stanage’. They campaigned to ensure that conservation and freedom of access remained central to its ownership, and that they be consulted more closely in this incredibly important decision.

The protest drew over 12,000 signatures and may well have helped the final decision of the Park Authority to retain ownership and therefore its protective jurisdiction over the Edge.

No-one can tell what the impact would have been both on conservation and access for climbers had it been sold off to private owners. But what is clear is that thanks to their feisty and well-organised campaign, access and sustainable use of the Edge has been preserved for many years to come.

Between a rock and a hard place

These rocks started out over 300 million years ago – long before the dinosaurs – as layers of sand, laid down at the mouth of an immense under-sea river. Every tide and flood dumped more sand onto the sea floor. Eventually the sands (or grits) were buried by mud, coal, and limestone. Over centuries the grits were compressed by the layers above, to form a rock called Millstone Grit. Later the rocks were pushed up and appeared above the sea floor, where they now stand tall.

Millstone Grit is very strong. As the weaker layers of rock around it are worn away - by water, wind and other types of erosion - the strong Gritstone remains, forming the edges that we can see from here and that entice in so many climbers.

Just 10 miles (16 kilometres) as the crow flies from where we stand now is the highest point in the Peak District - Kinder Scout. In the 1930s it became a flashpoint from bubbling anger among the working classes. This was an era of financial hardship, known the Great Depression. People looking for free countryside to explore and exercise in began to question the moorland's private ownership, with access reserved for the wealthy elite.

So in 1932 a group of protesters gathered for a mass trespass on Kinder Scout. The exercise led to violent scuffles with gamekeepers but eventually helped to change access rights. In 1949 the National Parks and Access to the Countryside Act led to the Peak District and nine other areas in England and Wales being designated as National Parks. 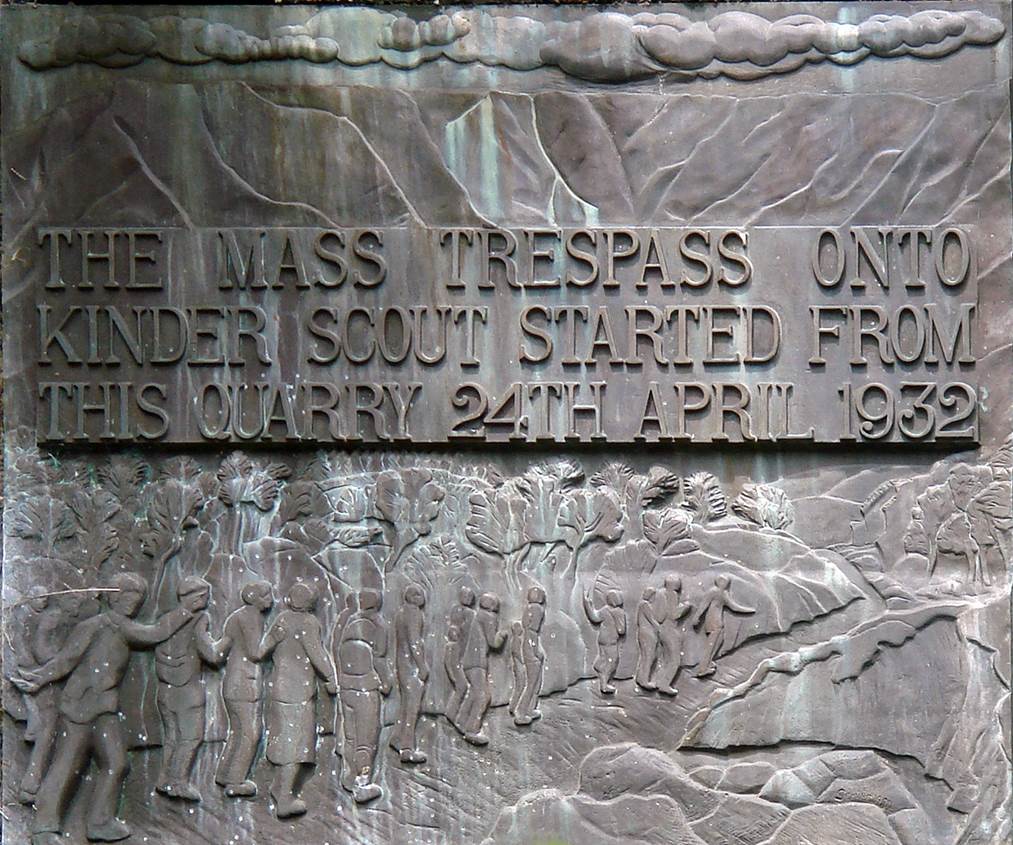 The Countryside and Rights of Way Act (2000) succeeded in allowing public access to large areas of uncultivated land mapped as ‘access land’. One of the most well-known acts of civil disobedience in the UK, the Kinder Scout protest contributed to a new era of greater freedom for walkers, climbers and other countryside enthusiasts, limiting the rights of the wealthy to have exclusive use of the moorlands.

Stanage Edge is hard to ignore, towering above an expanse of bracken and sheep tracks like a massive rampart on the horizon.

It’s an impressive landmark, sitting proud within the undulating landscape of the Peak District National Park. The Edge rises some 100 metres above the moorland below and stretches more than 4 miles (6 kilometres) along its top.

Stanage Edge has become a world famous playground for climbers, and thousands flock to scale it year on year. The named climbing routes evoke its sense of drama and challenge; could you tackle the Chip Shop Brawl, Goliath’s Groove or The Right Unconquerable? These names link climbers to their rock, but the background to the relationship between the Edge and its devotees is much more complicated.

So what does a ‘chip shop brawl’ on a crag face tell us about our right to enjoy the countryside? Click to reveal the answer

Margi Bryant for photography, additional research and advice on the text

"Like the long broken battlements of an old fortress" - W.A. Poucher, mountain photographer, 1946

How did a Sunday ramble in the Peak District lead to prison?

What created the distinctive peak of Roseberry Topping?