As you round the crest of the grassy ridge, the sleeping dragon comes into view for the first time.  From this distance and angle do those two green hills remind you of a dragon?

The smaller one to the left is Parkhouse Hill and the larger one to the right is Chrome Hill.  Nothing to do with rare metals, Chrome is pronounced as in broom and comes from an Old English word meaning bent, or twisted.  Parkhouse has also been known as Little Chrome. 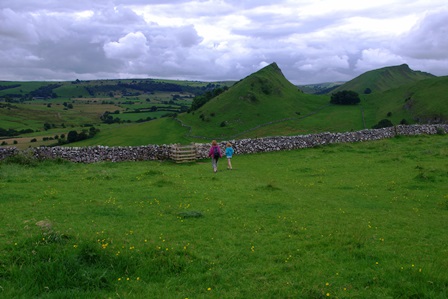 It is more than their shape which makes them so impressive, it is as much the setting; these two jagged beasts in the otherwise open valley of the famous River Dove, full of graceful curves.  So how on earth did these dramatic contrasts come into being? Keep walking to find out!

Continue on the footpath, over the ridge, descending in a series of loops, over stiles and through gates to the narrow B road.  Directly opposite, the path continues through another small wooden gate, but take instead the concessionary route, slightly to the right of this, over an open field and straight towards Parkhouse Hill.  The hill itself is open access land, but our trail follows the well-worn way, steeply up the ridge, all the way to the top.

Congratulations!  That is the steepest climb of the whole walk over with and we need somewhere to get our breath back.  This pronounced summit offers an obvious place to sit, almost like a few stone stools bunched together – so take the weight off your feet.  You might need something for a cushion as you will quickly notice that this limestone is very hard indeed.

The view westward is towards Chrome Hill, our next objective and at once you will see how much higher it is.  Best, for now, to ignore it and turn the other way. Take in the calming, broad sweep of the Dove Valley behind you.  The river's course can be made out by that sinuous line of alder trees which line the riverbanks for almost its entire progress.

All those meanders mean that the Dove at this point cannot be a fast flowing river, while the narrow line of alders betrays its very modest width – not much more than a large brook.  It looks a little dwarfed by the impressive valley; surely some other, more powerful force than the trickling Dove must have helped shaped this scene?  Dragons perhaps?

As you descend the hill, you will be forgiven for thinking you are walking along the vertebrae of a sleeping dragon's back; or perhaps a Stegosaurus?  You will see what I mean as you near the bottom of this tricky descent.

Continue along the ridge, descending now, taking the easiest way around the knolls.  Nearing what looks like the penultimate knoll, take the alternative way to your right which swings back into the open field a little way, before skirting the base of the hill to your left.

3 Base of Parkhouse Hill

Looking back at the hill, you'll see why I recommended taking that detour to the right; the well-worn way coming down is so steep it requires rock climbing skills.  And what a dramaticallysudden end to those slopes which are indeed like the plates on the back of a gigantic stegosaurus.

From our viewpoint on the flat valley floor, with a little imagination, it feels like we could be standing on a sea bed, looking up at a coral reef.  Well, around 350 million years ago, during the Carboniferous period that would have been precisely where we were. During this period much of Britain was covered by warm, tropical seas as the part of the Earth’s crust that we now know as Europe was actually located very near to the Equator. 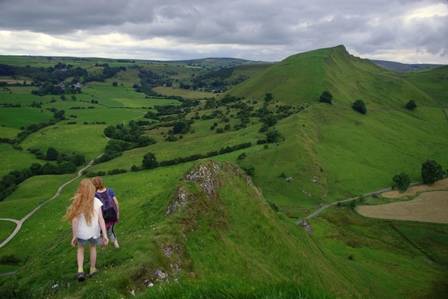 The term for these limestone hills is reef knolls. They were formed on the ancient sea bed as layers of tiny dead sea creatures, such as early molluscs and sponges, built up over millions of years to form limestone mounds.

This area of Dovedale sits at the junction between this harder limestone and softer, clay-like shale deposits which formed in the shallower parts of the sea. Over time, as the softer surrounding shale rocks have worn away these jagged limestone hills have been left behind.

Of course, we would not have needed walking boots, but a diving suit or mini-submarine to explore the undersea world back then.  Today we can only imagine such buoyant luxury as a warm tropical sea to float in, as we turn around to face the challenge of the climb up Chrome Hill.

Walk along the minor road a very short way towards the cattle grid and sign which reads, HORSE DRAWN VEHICLES AND ANIMALS.  This is the start of the concessionary path to Chrome Hill. Make your way to the top via the well-worn route, then over the summit a short way, to find the rock arch, just to the right of the path.

Travelling back to that ancient period around 350 million years ago when these reefs were relatively new, it is not hard to imagine prehistoric fish of bright tropical colours swimming through here in a warm sea of crystal blue waters.  Perhaps the arch was part-exposed by the tide for some of the day, with waves crashing and surging through.  Stand inside and feel its sides, worn by the passage of 350 million-year-old currents.

A little further down the ridge, you will come across a small cave, (you may have already spotted it from the hilltop); just as with this arch, the cave at once reminds me of a scene on a rocky seashore. 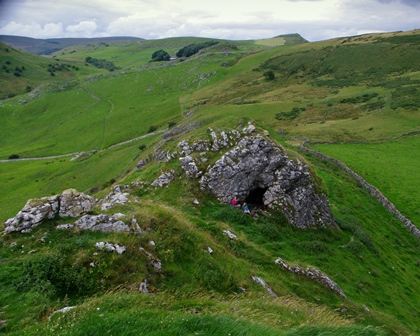 Slowly but surely, our reef knolls would, in fact, have become shoreline features.  As the climate became drier, the sea level dropped and this region became land-locked.  By the Triassic period, around 250 million years ago, it is reckoned that these two hills would have looked pretty much as they do today.  Another leap of the imagination; picture early dinosaurs grazing and hunting around a dry forest, perhaps using these knolls as hiding places, or as cover for an ambush.

But 250 million years is a long, long time ago – just how could these outstanding features, tough as they are, have been so very well preserved?  Take a peek down into the narrow valley to the north side. Do you see signs of activity from a present day wild animals?  Those holes and excavations you can see are a huge badger sett.

After our early dinosaurs had moved on, this area became inundated once again with shallow, muddy water, and layer upon layer of soft clay deposits built up to form shale, burying and preserving the reef for millions of years and until relatively recently.

By ’recent’, in geological terms, we mean approximately ten thousand years ago, when a huge volume of ice powered through here, scooping and scouring away the softer shale rocks, to reveal the hard limestone hills in all their glory. On the valley floor, the glacier and its meltwater deposited thin layers of this eroded material – the softer, sandy and gravelly stuff those badgers have been digging in.

Continuing down the spine of Chrome Hill, by whichever way seems easiest, you eventually leave the open access area, so keep to the well-marked concessionary footpath. The path takes a right-angled turn to the right, up a steep grassy slope.  The next stop is about halfway up and to the left of the path.

A trickling noise gives away the presence of flowing water, the first we have encountered, since climbing Chrome Hill; but where does it go?  Seemingly nowhere. In fact it plunges down a swallow hole at the bottom of that pit, whose rim is just visible from here.  Get closer to the tiny stream and you will see a small pit, with a large, rusty metal disc lying in its bottom.  Gently and carefully lift this by the handle and suddenly you are staring down a shaft.  Unless you have come prepared for serious pot-holing, do nothing more than replace the cover.  This disappearing little stream brings us to the final chapter in the story of the Dragon's Back. 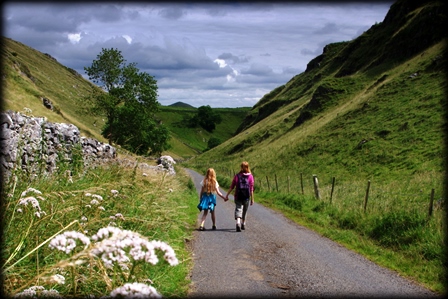 Having been built up by tiny organisms in a tropical sea, left high and dry as a playground for dinosaurs, covered by muddy shale, scoured and cleaned by ice, it is fresh water that has the final word.  Ever since the retreat of the last glacier, rainwater has been exploiting small weaknesses in the rock. The water has found, found secret routes down towards the river, further eroding the rock as it travels on its journey, creating dark, underground caverns for the adventurous to explore and the perfect home, perhaps, for sleeping dragons?

Continue up the hill on the concessionary path; where it  then turns sharply to the left, along a stone wall.  Follow the wall until you meet the farm track (for Stoop Farm), turning right onto this, to meet the minor road.  Turn right and walk about half a mile along the road down Dowel Dale.  Quite deep down in the dale, just where it makes a turn to the right, take the public footpath on the left, steeply over a ridge, through an open field.  Go over a stone stile and then follow the wall to emerge onto another minor road.  Right onto this takes you back into Earl Sterndale and The Quiet Woman.

A dramatic short walk in the Peak District National Park

Slumbering at the head of the peaceful Dove Valley, on the Derbyshire / Staffordshire border, lies a pair of legendary hills with a surprisingly colourful past.

Dovedale is one of the most famous and iconic tourist stops in the Peak District. Just a little higher up the course of its river, however, is a quite remarkable landscape; one that is, strangely, little visited.

Perhaps there is an instinctive fear of a feature known among walkers as the Dragon's Back.

This trail sets off fearlessly along the spine of the monster, in an attempt to unpick the mystery of its origins...

Simon Corble for creating and photographing the trail. Simon, a theatre director, playwright and actor based in Derbyshire's Peak District, is passionate about the countryside and discovering the hidden secrets of the natural world.

Human toil engraved on the landscape